The CCP was founded in 1921, and this week, top party brass are touting their achievements with big public relations campaigns. But as the party bolsters its image, is there weakness behind the facade? 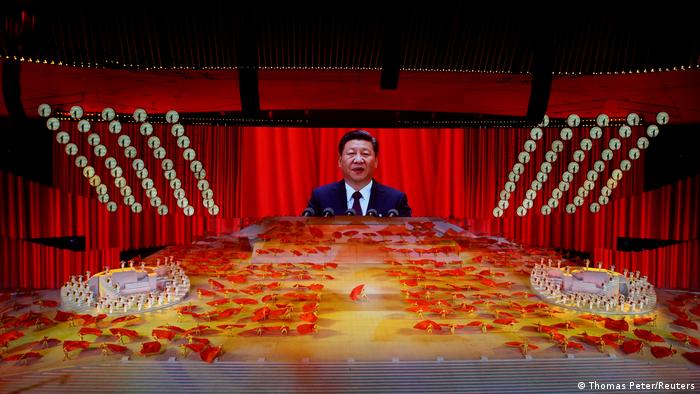 The Chinese Communist Party (CCP) is preparing to celebrate the 100th anniversary of its 1921 founding on Thursday with nationwide festivities and fanfare.

Banners and billboards touting the leadership's success have been set up in the weeks leading up to July 1, and the CCP staged an extravagant performance on Monday at the National Stadium in Beijing.

The CCP is the second-largest political party in the world — it is half the size of India's Bharatiya Janata Party (BJP). The party had 91.9 million members in 2019, and has ruled China since seizing power after a civil war in 1949.

"The Chinese Communist Party's international influence, appeal and attraction have continually increased, placing it at the forefront of world politics," Guo Yezhou, deputy head of the party's external liaison department, told reporters at a press event this week.

The CCP has steered China through a century of wars, famine and social upheaval. In the last 20 years, millions of impoverished, starving Chinese who lived in the countryside have been lifted from extreme poverty. This social mobilization has helped create the second-largest economy in the world.

However, the party's concentration of power and expansive foreign policy under President Xi Jinping has raised concerns that China is turning more towards authoritarianism.

Criticism of the party and its policies is quickly snuffed out. Chinese military expansion in the South China Sea has drawn international condemnation, as has a crackdown on civil liberties in Hong Kong and the treatment of the Uyghur Muslim minority in the western Xinjiang region. 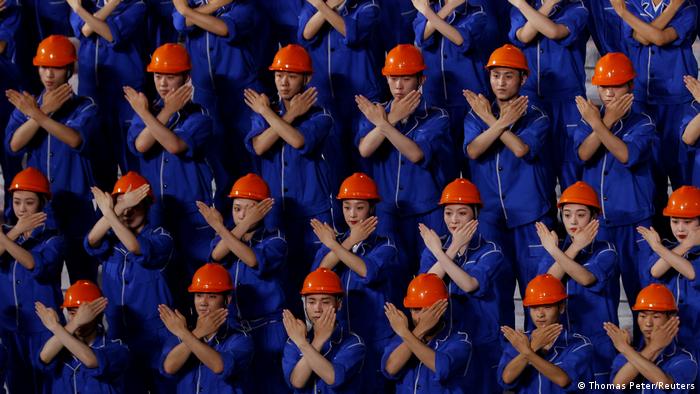 Performers dressed as 'workers' at a centennial celebration in Beijing

President Xi at the peak of power

These points of criticism will, of course, not be mentioned during the celebrations.

The party will "showcase living proof of the success and resilience of its governance system," Valarie Tan, an analyst at the Berlin-based Mercator Institute for China Studies (MERICS), told DW.

"The 100th anniversary is not just historically significant for the CCP. It holds great political significance for Xi Jinping," she added.

Throughout the week, party officials praised Xi, who is considered to be China's most powerful leader since the founder of the People's Republic of China, Mao Zedong.

"The party is keen to showcase to the world that its system has not only succeeded in overcoming financial crises, natural disasters, political scandals, and a global pandemic, but that it remains unbroken, and has emerged stronger and is ready to ascend to superpower status by 2049, as Xi Jinping has set as a goal," Tan said.

"That is the image it wants to project as it celebrates the 100th anniversary," she added.

In February, Xi issued a revised version of "A brief History of the Communist Party of China" — the official party history — to coincide with the centenary. The printed version contains over 500 pages.

The latest edition of the CCP's official history condenses the decade-long turmoil of the Cultural Revolution into three pages and downplays Mao's atrocities, softening the party's 1981 condemnation of the revolution.

The section on The Great Leap Forward is also shortened and only mentions "economic difficulties." In comparison, the textbook from the CCP's 90th anniversary still used the words "famine" and "famine deaths."

The Great Famine — during which tens of millions of people died under Mao's economic policies —  is mentioned only once in the new textbook as a "natural disaster."

Felix Wemheuer, a sinologist at the University of Cologne, says historiography has traditionally played "a very important role" for the party and its legacy as part of efforts to boost its "legitimacy."

The 1989 Tiananmen Square protest is "dealt with very briefly," and is described as a counterrevolutionary uprising seeking to abolish the socialist system and "had to be put down by the government," Wemheuer told DW.

The purpose of the text is to convey the message that "even though there have been crises … the party has always been able to rebuild itself and lead China on the road to prosperity," Wemheuer said.

The "crowning finale" of the book is Xi's "ideas for the new era," said Wemheuer, which will be defined by surpassing the US as the world's largest economy, and China establishing itself as a first-rank military and technological power.

"It is striking that the section on Xi Jinping takes up about a quarter of the entire book, although he has only been in power for eight years, given 100 years of party history," Wemheuer said.

The revised textbook will also become part of university examinations. Millions of Chinese will be expected to memorize standardized questions and answers based on the book.

For analyst Tan, one of Xi's top goals with revising history and presenting China to the world is to "tell the China story well."

Recently at a party session, Xi called for efforts to build a "credible, lovable and respectable image of China."

"The goal is to counter and undermine negative narratives of China, particularly those from the West," said Tan.

"Efforts to support this are likely to be stepped up, be it through online influencing campaigns on Twitter, wolf warrior diplomacy, viral digital propaganda or cultivating China-friendly journalists and influencers," she added.

This comes along with China's immediate goal of establishing self-reliance in critical technological sectors outlined in the "Made in China 2025" plan.

Xi had set 2021 as the target year for China to become a "moderately prosperous society" by eliminating extreme poverty. Earlier this year, Xi declared victory on the fight against poverty.

How long will Xi stay in power?

Xi, who has led China since 2012 and has eliminated any limits on his term in office, is yet to appoint a successor.

In 2022, the current Politburo Standing Committee is expected to step down and announce new leaders. The question looming over next year's party congress is whether Xi will revive Mao's title of party chair.

"There is now a lot of uncertainty over what will happen at the party congress, whether Xi chooses to stay in power, or otherwise," Tan said.