The annual meeting of China's rubber-stamp legislature in Beijing has concluded with delegates endorsing the Communist Party's latest five-year economic plan and passing a new election law for Hong Kong. 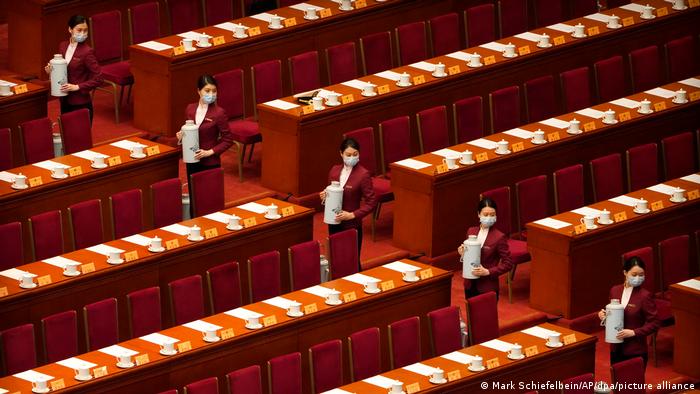 With nearly 3,000 delegates, the NPC is officially the highest organ of state power in China.  However, in practice, it mainly serves as a rubber stamp legislature for decisions made by the ruling Chinese Communist Party (CCP).

The CCP generally uses the annual NPC session as a high-profile political event to provide a stage for major policy moves and outlining long-term plans. The 2021 session lasted seven days.

What did the NPC do on China's economy?

The Congress endorsed the CCP's latest five-year development blueprint, which calls for China to become more self-reliant on developing key technologies to reduce dependence on the United States and Europe for innovation.

The plan also aims to boost domestic consumption and to reduce economic reliance on exports of lower quality goods.

Chinese Premier Li Keqiang told a press conference following the session that job creation was a top economic priority, and that China aims to create more than 11 million new urban jobs in 2021. Li also said that China is aiming for more than 6% economic growth in 2021.

China's growth in 2020 was 2.3%, which was the slowest pace in over 40 years due to the coronavirus. However, China was the only major global economy to grow in 2020. Premier Li said that Beijing would continue to cooperate with the World Health Organization (WHO) to determine the origins of coronavirus.

The virus first emerged in the central Chinese city of Wuhan in late 2019. However, the source of the first breakout has yet to be officially determined.

China has been criticized for covering up the severity of the outbreak at the outset while muzzling those who attempted to spread information from inside the country.

When a WHO team visited Wuhan earlier this year, the United States criticized Chinese authorities for not being transparent on sharing data about the first COVID cases.

Li said that China had "acted in a fact-based manner and with an open, transparent and cooperative approach."

The NPC on Thursday unanimously endorseda new CCP measure for Hong Kong that will give a pro-Beijing committee the power to appoint lawmakers in the semi-autonomous Chinese territory.

The measure adds to a crackdown against Hong Kong's pro-democracy movement, which erupted in 2019 in response to a now defunct proposal that would allow extradition to mainland China.

Part of the new election measures will be appointing a vetting committee to ensure Hong Kong's public officials are "patriots" who are loyal to the CCP. Critics say the measure will lead to the removal of the political opposition from Hong Kong's government.

At the 2020 NPC session, the CCP introduced its controversial national security law for Hong Kong, which criminalizes acts that Beijing considers to be sedition, subversion or collusion with foreign powers.

The law, which was put in force in July 2020, has drawn international condemnation as a crackdown on civil liberties. So far, 47 former Hong Kong legislators and pro-democracy figures have been arrestedon subversion charges.