How China′s new election laws threaten Hong Kong democracy | Asia | An in-depth look at news from across the continent | DW | 09.03.2021 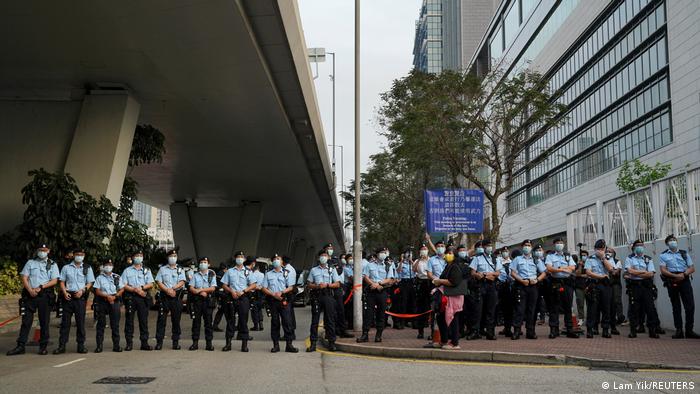 Chinese Communist Party leaders at annual parliamentary meetings in Beijing this week are putting the finishing touches on a major overhaul of Hong Kong's electoral system, which Beijing says will ensure that the city is run by "Chinese patriots."

Under the new rules, the election committee responsible for choosing Hong Kong's Chief Executive would add 300 members, bringing the total number of electors to 1,500.

If the new bloc is composed of pro-Beijing voters, as is expected, it would severely hamper the opposition's ability to influence Hong Kong's leadership.

The proposal also increases seats in Hong Kong's legislative council (Legco) from 70 to 90, with the expansion including more seats for Beijing loyalists. Seats from constituencies where opposition candidates have traditionally performed well are expected to be reduced.

Wang Chen, the vice chairman of China's rubber-stamp parliament, said Friday that the reforms will "improve" the system and ensure a "transition from chaos to governance."

"I'm glad that the central authorities have, again, exercised constitutional powers to help address this problem for Hong Kong," Lam told a press conference. "There are loopholes in the electoral systems," she said. "There are also flaws in the systems." 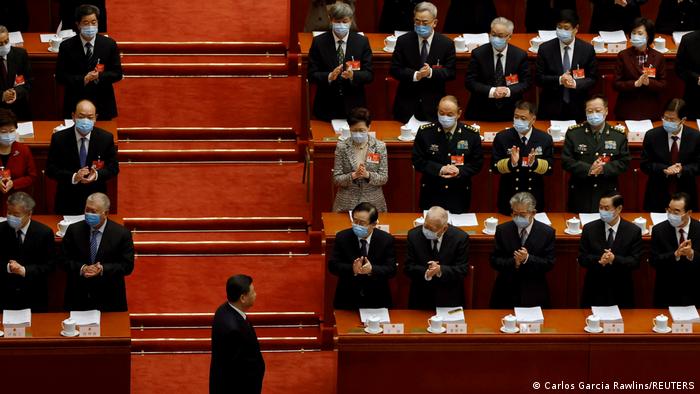 Xi at the National People's Congress. Carrie Lam can be seen one row back in grey

Experts view election reform as the latest clampdown on Hong Kong's civil liberties, which used to be guaranteed in the semiautonomous city under the Basic Law.

In 2020, Beijing imposed a national security law, which outlaws broadly defined acts of "sedition, subversion and collusion with foreign powers." Many leading pro-democracy figures have already been jailed under the law.

"The changes are the latest to limit political freedoms in Hong Kong," Jeff Wasserstrom, a historian of modern China at the University of California, Irvine, told DW.

"Until recently, there were political campaigns that different kinds of candidates could run, and legislative sessions in which there was spirited debate between opposing sides. Recent moves inside Hong Kong and now in Beijing have been designed to minimize the space for that sort of political activity," Wassestrom said.

Shortly before Beijing unveiled the proposal last week, 47 opposition figures appeared in court on charges of subversion of state power for participating in an informal primary last year. Most of them remain in custody.

Victoria Hui, a political scientist at the University of Notre Dame, told DW that the rigging of the election system in favor of Hong Kong's pro-establishment camp means that Beijing thinks that jailing the opposition doesn't go far enough to stifle dissent.

"This essentially leaves no room for dissent and functional representation," Hui said.

"Beijing wants to prevent anyone new from coming out to run and having a chance of getting elected," Hui added.

Apart from increasing seats in both the election committee and Legco, Beijing also plans to establish a "full vetting mechanism" to assess candidates running for either body, ensuring that office holders are "sufficiently patriotic," according to the South China Morning Post, quoting Wang Chen.

Hui said Beijing was vetting and disqualifying sitting officials in order to ensure that only approved names appear on ballots.

"Even if some people get past the first hurdle, they could get disqualified," Hui said.

Kenneth Chan, a political scientist at Hong Kong Baptist University, told DW that, when the United Kingdom handed Hong Kong back to China, the agreement was achieved on the understanding that the city would progress toward democracy.

"Without that consensus, the first handover probably wouldn't have happened," Chan said.

"To many Hong Kongers, democracy safeguards some of the core values that we have long cherished," Chan added. "That's why we have the One Country, Two Systems model."

"It's an autocratic handover, and Hong Kong is backsliding from 'moving towards democracy' to moving towards autocracy," Chan said.

What can pro-democracy activists do?

As the path for opposition through political participation continues to disappear for Hong Kong's pro-democracy camp, some activists said they would find other ways to resist.

"I know some people are very pessimistic, but I hope others will soldier on," Emily Lau, a former chairperson of the Democratic Party, Hong Kong's largest opposition party, told DW.

"If there are no elections to be fought, and we think those elections are not meaningful, we should not take part in them or become some kind of decoration," Lau said.

"It's sad to see people around me being arrested and locked up. It could happen to me and others too, but we have to continue the struggle," she added.

"There are things I cherish in Hong Kong and I will do my best to preserve them even if I have to pay some price during the process," Lau said. "Look at Myanmar and Thailand. We should do our best to fight for the system that we believe in, but in a peaceful, nonviolent way."

Most women aren't allowed to work in Taliban ruled Afghanistan. Those that can, are mostly doctors. We meet one in Kabul. She tells us of the challenging conditions she and her colleagues work in. And later, the women, forced to give up their careers. Struggling to survive, yet fighting for their rights.

Zulfikar Ali Bhutto Jr: No place for me in Pakistan's non-serious political landscape 09.08.2022