Authorities have disqualified 12 opposition candidates from running in the upcoming election, with activist Joshua Wong saying he was among them. The government rejected accusations of "political censorship." 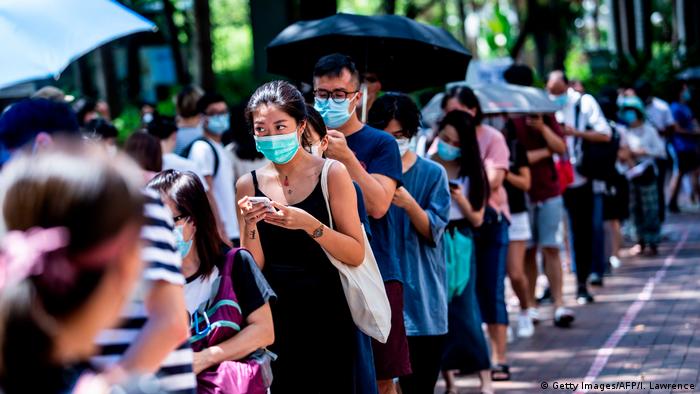 At least 12 opposition candidates will not be able to run in elections for the Hong Kong legislature this September, and more candidates could be barred soon, authorities have said on Thursday. The government pointed to advocating for self-determination, urging foreign intervention, and "expressing an objection in principle" to the controversial new national security law as reasons for ban.

Popular Hong Kong activist Joshua Wong said he was also among the 12 barred politicians, despite his victory in the primary vote held within the pro-democracy bloc.

"The excuse they use is that I describe [the national security law] as a draconian law," the 23-year-old political leader said.

He added that Beijing has "staged the biggest-ever crackdown on the city's election, by disqualifying nearly all pro-democracy runners, from young progressive groups to traditional moderate parties."

New age for next election

The local government in the former British colony rejected accusations of "any political censorship, restriction of the freedom of speech or deprivation of the right to stand for elections as alleged by some members of the community."

The government said there could be more disqualifications.

"The government is constructing a CCP (Chinese Communist Party) assembly in (Hong Kong's Legislative Council) to eliminate most of the opposition voices. Outrageous," Nathan Law, a pro-democracy activist and former lawmaker who was kicked out of the legislature, said on Twitter. Law left Hong Kong for Britain earlier this month.

The September elections are the first to be held after China enacted the security law last month. The law, pushed through after months of anti-Beijing unrest in Hong Kong, makes secession and subversion punishable by a maximum sentence of a life in prison. In addition to tackling secession, terrorism, it also targets "collusion" with foreign powers.

A day after the law went into effect, Wong stepped down as head of pro-democracy group Demosisto out of concern he would be targeted under the new legislation.

On Thursday, he accused Beijing of showing "a total disregard for the will of the Hongkongers" and trampling "upon the city's last pillar of vanishing autonomy."