The United States has approved the sale of 66 advanced F-16 fighter jets to Taiwan. The sale adds to already tense relations between Beijing and Washington. 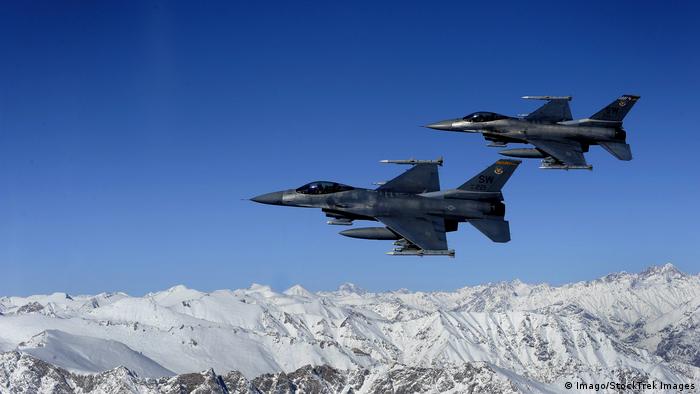 China threatened to sanction US companies involved in the sale of weapons to Taiwan on Wednesday after the United States approved an $8 billion (€7.2 billion) arms deal to the island.

The US State Department on Tuesday approved the sale of 66 Lockheed Martin F-16 fighter jets, 75 General Electric engines and other parts and accessories following another military sale to Taiwan last month.

The proposed sale comes as ties between Washington and Beijing are strained over a tit-for-tat trade war and geopolitical competition on the Asia-Pacific region.

China's Foreign Ministry said the proposed arms deal constituted interference in its internal affairs and undermined its sovereignty and security.

"China will take all necessary measures to safeguard our interests including imposing sanctions on the US companies participating in this arms sale to Taiwan," Foreign Ministry spokesman Geng Shuang said at a news briefing.

China views Taiwan as part of its territory and has vowed to one day reunite the island with the mainland, even with the use of force. The Chinese military regularly enters Taiwan's air space and sends warships to the area in a show of force.

Taiwan already has a fleet of older F-16s purchased in 1992 that has undergone upgrades.

Under the proposed sale, Taiwan would get the advanced F-16 Block 70/72, which includes many technologies not present in earlier models.

"With strong self-defense capacity, Taiwan will certainly be more confident to ensure the cross-strait and regional peace and stability while facing security challenges," she said.

US Secretary of State Mike Pompeo said Tuesday the F-16 sale is "deeply consistent with the arrangements, the historical relationship between the United States and China."

"Our actions are consistent with past US policy," he said. "We are simply following through on the commitments we've made to all of the parties."

In a statement, the Defense Security Cooperation Agency, which oversees US foreign military sales, said the F-16s would "not alter the basic military balance in the region."

"This proposed sale will contribute to the recipient's capability to provide for the defense of its airspace, regional security, and interoperability with the United States," it said.

Beijing "will be forced to take countermeasures," if the US deploys intermediate-range missiles in the region. A senior official also called on neighboring countries to "exercise prudence" about hosting any missiles. (06.08.2019)

Movie stars from mainland China have been banned from participating in Taiwan's Golden Horse Awards — dubbed the "Chinese-language Oscars." It's seen as the latest step by Beijing to up pressure on the self-ruled island. (07.08.2019)