Australia's relations with its biggest trading partner are at their lowest point in decades. Some people Down Under see this as an opportunity to cut their overreliance on China, but they may be too optimistic. 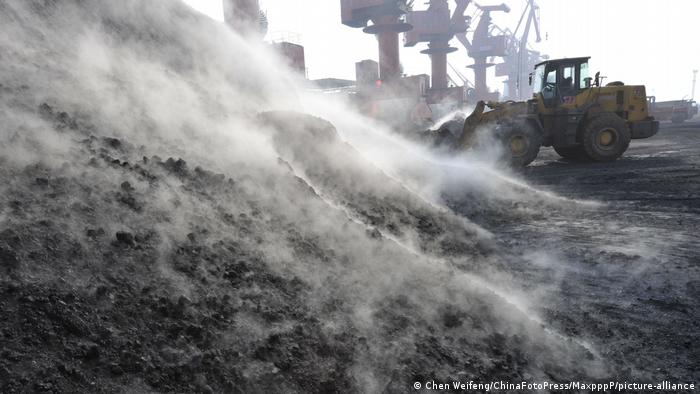 There are reports that Australia's coal is not wanted in China, their biggest market, with Chinese power stations and steel mills canceling orders and Chinese ports turning away Australian shipments following verbal directives from authorities.

While the motive behind the ban is not yet clear — experts say it could simply be aimed at supporting China's domestic coal industry, which is struggling with a supply glut, as has been the case in the past — many in Australia see it as Beijing's latest salvo amid diplomatic tensions with Canberra. Their concerns have been bolstered by reports of Chinese spinning mills also being ordered to stop buying Australian cotton.

The latest restrictions come just days after Australia took part in a meeting of "The Quad," a grouping that also includes Japan, the US and India. Ahead of the meeting, Beijing had slammed the grouping as "exclusive cliques."

Relations between Australia and its largest trading partner have been souring since 2017 when the Australian national security agency warned of growing Chinese interference in Canberra's domestic affairs. Tensions escalated after Australia became the first country to ban China's Huawei from its 5G network before soaring to new heights earlier this year after Canberra led a global effort calling for a probe into the origins of the COVID-19 pandemic, which first emerged in Wuhan. 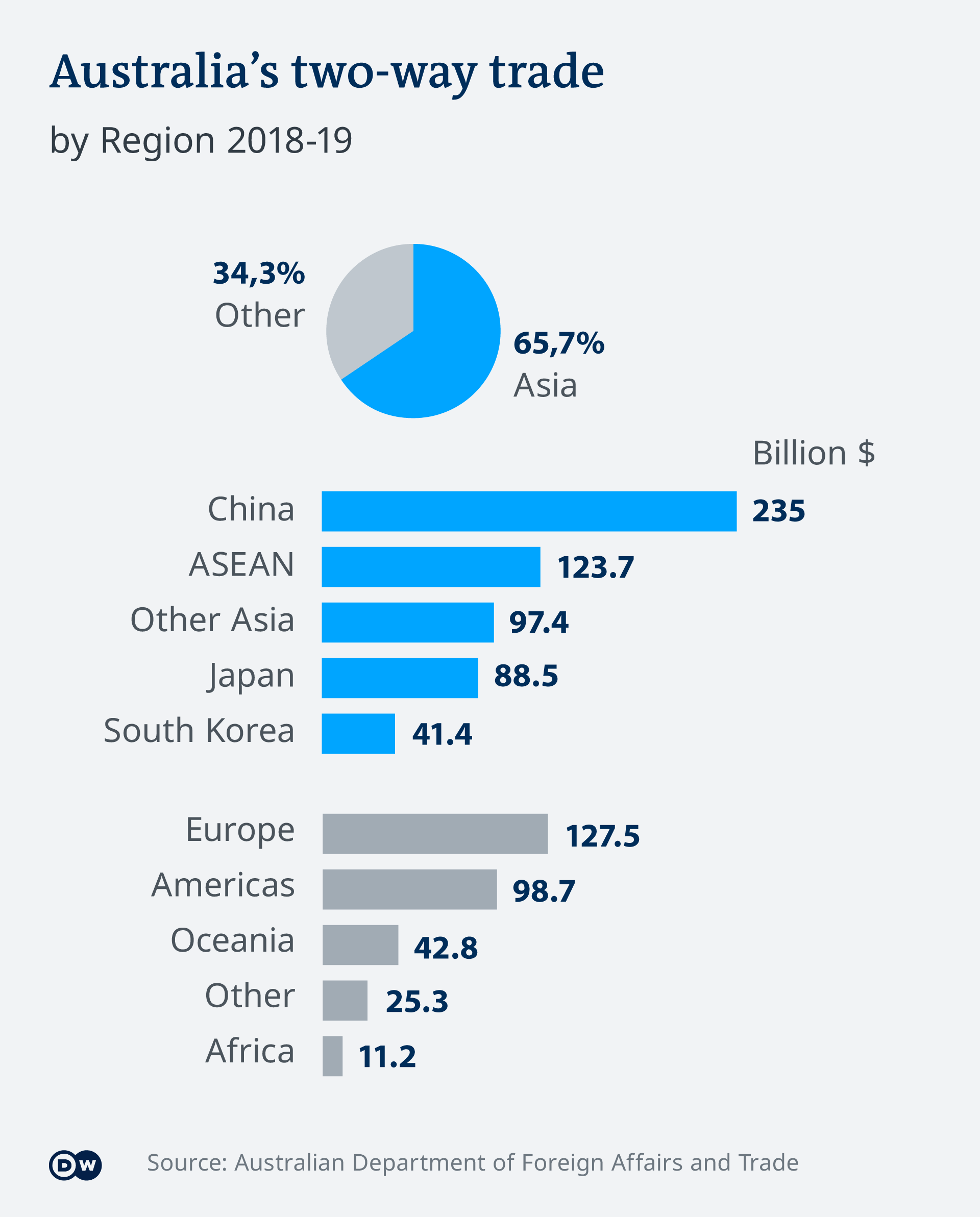 China responded to Australia's call for an inquiry, likened by a Chinese diplomat to the betrayal of Roman general Julius Caesar by Brutus, by slapping restrictions on imports of Australian beef, barley and wine. Beijing also warned students and tourists against traveling to Australia because of alleged racism.

"Political tensions between Australia and China have been apparent since 2017 ... what's changed this year is that there is some increasing evidence that those political tensions are spilling over to hurt trade," James Laurenceson, director of the Australia-China Relations Institute at the University of Technology, Sydney, told DW. "Though, I don't think it's time to panic just yet."

Yet, the restrictions targeting billions of dollars' worth of goods have reignited a debate around Australia's massive reliance on China as a market for its goods.

China accounted for a third, or about 169 billion Australian dollars ($120 billion/€102 billion), of Australia's exports in 2019. Iron ore, coal and gas — the country's biggest exports — made about 60% of those sales. Australian universities and tourism hot spots count on the Chinese for a big chunk of their business. China is also one of the biggest investors in Australia. 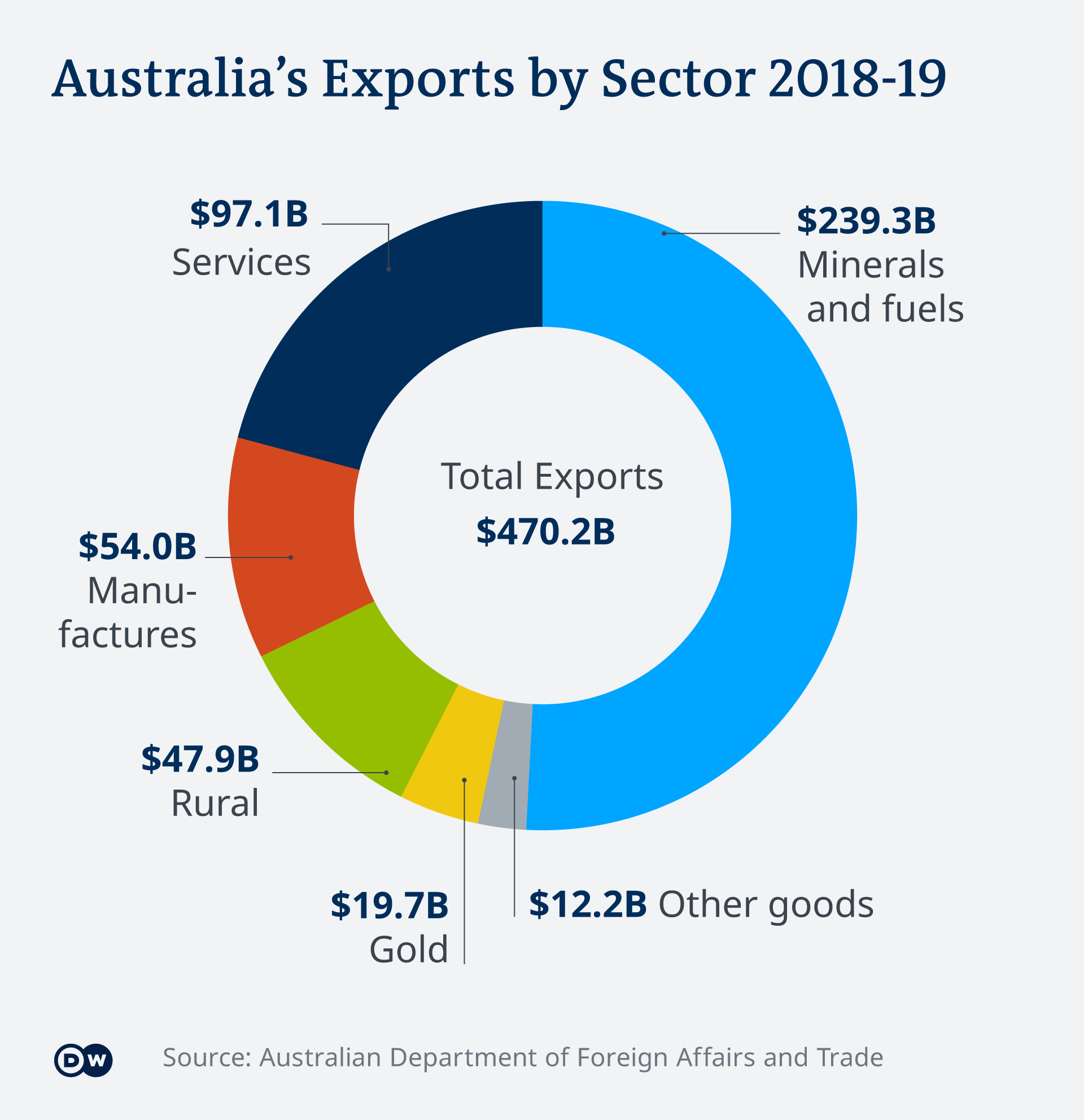 Some security analysts warn that such an overreliance on China makes Australia extremely vulnerable, given Beijing's penchant for using economic levers to settle political scores.

A recent report by the Australian Strategic Policy Institute, a security think tank, found that China — the largest trading partner for nearly two-thirds of the world's countries — used "coercive diplomacy" against 27 countries as well as the European Union over the past 10 years. The coercion was in response to things like countries calling Beijing out for its treatment of minorities in Xinjiang, blocking Huawei's 5G technology, questioning its territorial claims or hosting the Dalai Lama.

India as an alternative to China?

That's why the analysts suggest Australia should look away from China to other major economies, especially in Asia. The Australian government and businesses have been courting India and Vietnam, which are often touted as promising markets for Australian goods.

Last year, Prime Minister Scott Morrison became the first Australian leader to visit Vietnam in 25 years. Morrison was also expected to meet Prime Minister Narendra Modi in India in January, but the trip was canceled due to the bushfire crisis back home. The two eventually met via video link in June, but not before Morrison charmed the Indian leader with "ScoMosas," his version of samosas.

But cutting reliance on a country that's dubbed the factory of the world is not that simple, especially during an economic crisis of this scale.

"It's difficult to see how the current situation — the worst global recession in living memory — could be viewed as an opportunity for Australia to reduce its reliance on the world's second-largest economy, and the only major economy to be recording positive rates of GDP growth this year," Jane Golley, director of the Australian Centre on China in World at Australian National University, told DW.

Golley said China would add more than seven times as much output to the global economy as India, based on GDP projections for 2020. "It is simply not feasible to look elsewhere for replacing the Chinese market," she said.

India lacks the scale to replace Chinese demand for Australian energy and commodities, despite its vast population and growth potential. It accounted for only AU$23 billion worth of Australian exports in 2019, just a fraction of the goods and services bought by China. Experts have also cautioned against unbridled overtures toward India, citing the rise of Hindu nationalism and increasing marginalization of Muslims during Modi's tenure.

Laurenceson cautioned against overreacting to China's trade restrictions, suggesting they are more bark than bite. He said past Chinese actions against the Australian coal, beef and wine sectors have had only a modest impact on overall trade.

"China may have been sending a signal," he said. "[But] they're still pretty reluctant to pull the trigger because if they do, it actually hurts China, too."

Australian iron ore and superior coking coal that feed Chinese steel mills and thermal coal that power the country's power plants have been key to China's growth story. Finding alternative suppliers of a similar size and quality to Australia wouldn't be easy for Beijing.

However, the situation could change in the longer term. China may not need as much of Australia's coal, iron ore and gas as it takes steps toward a more self-sufficient and environment-friendly, but slower growth. China is already 95% self-sufficient in coal and plans to boost that to 100% in a blow to Australian coal miners, who are already struggling to churn profits.

President Xi Jinping has pledged to speed up reductions in emissions in the world's top polluter and boost investments in renewable energy in a bid to achieve net-zero emissions by 2060. The green pledge would mean lower demand for conventional energy imports such as coal and gas.

The changes in China mean Australia can't perpetually rely on an economic model — heavily focused on fossil fuels and China — that has provided rich returns for the economy, even helping it stave off a recession following the global financial crisis of 2008/09.