Children evacuated from Greek refugee camps to arrive in Germany

After weeks of debate and delays, a group of children who were evacuated from refugee camps in Greece are set to arrive in Germany. Over 50 unaccompanied children are headed to Osnabrück. 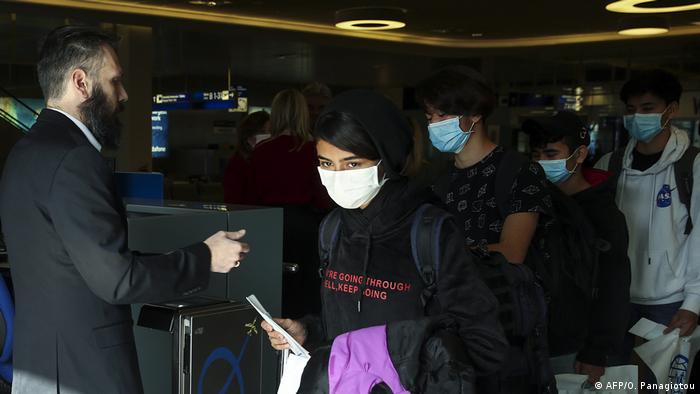 The first group of children that Germany agreed to take in from Greece's overcrowded refugee camps are set to arrive in northern Germany on Saturday.

The children will be taken care of near the city of Osnabrück, a spokesperson for the state Social Affairs Ministry told news agency DPA.

The children were initially expected to fly into Hanover Airport on April 11, but their arrival was delayed.

The Neue Osnabrücker Zeitung first reported on their imminent arrival, saying that the group contained 58 unaccompanied minors — the majority younger than 14.

The children will receive provided with medical and psychological care.

"These children had to live in miserable and catastrophic conditions for many months and some of them lost their parents due to war or while fleeing," Osnabrück district administrator Anna Kebschull told the paper.

Due to the ongoing COVID-19 pandemic, the Interior Ministry said on Wednesday that the children would be placed in quarantine for 14 days in the state of Lower Saxony before being taken to other states where they will be cared for.

After a faltering debate over resettling refugees in Greece's overcrowded and unsanitary camps, Germany agreed to resettle at least 50 children.

A group of 12 migrant childrenfrom Lesbos, Samos and Chios left Greece for Luxembourg on Wednesday (pictured above.)

Seven EU-member states agreed to take in 1,600 unaccompanied children from camps on the Greek island of Lesbos, Chios and Samos — but Greek officials and human rights advocates say the execution of the resettlement plan has been painfully slow.