A special government inquiry on child sex abuse in Germany has demanded more dialogue on the subject after presenting its findings in Berlin. More than 80 percent of victims who spoke to the inquiry were women.

German inquiry calls for end to silence on child abuse

The inquiry, which was commissioned by the German government in 2016, presented its first findings in a report on Wednesday in Berlin. The 350-page report called for a more dialogue on the issue.

"We are in crisis when it comes to child protection in Germany," said Johannes-Wilhelm Rörig, the inquiry's independent commissioner. "Politicians must recognize that they have to realign themselves on this issue."

Over the course of the three-year inquiry, around 900 people testified in confidential hearings and another 300 submitted written reports for evaluation.

Some 83 percent of the victims who participated were women and more than half suffered abuse within their family. Nearly half were younger than six years old when the abuse occurred, and a third of the victims are now in their 50s or 60s. 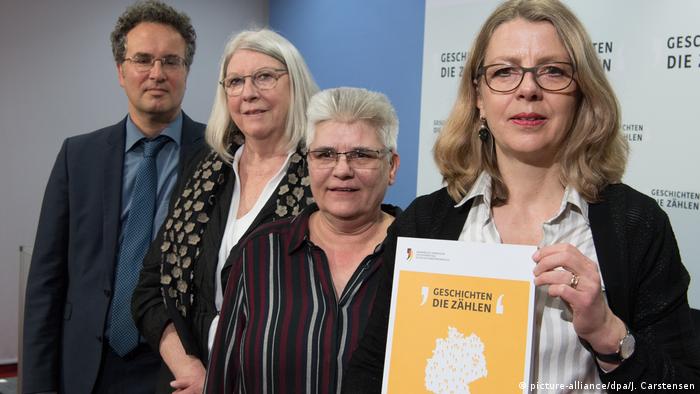 The inquiry presented its findings in an initial report in Berlin

In some cases, the abuse passed through generations in the same family, the inquiry found. Family memories of Nazi war crimes often led to abuse generations later.

The inquiry was originally intended to run for three years, but its mandate has been extended to allow it to investigate other areas of abuse and come up with concrete proposals for remedies.

Sabine Andresen, an education professor and the inquiry chair, said the report was not a representative study, but it did show how children experience sexual abuse, what the consequences are and why those affected are not always sufficiently helped.

According to the inquiry, many adults who were once victims of sexual abuse as children were left alone with their problems. They said there is a lack of recognition and support in dealing with them.

According to recent crime statistics, there were nearly 14,000 cases of child sex abuse reported last year. Experts believe however that the number of unreported cases is much higher.

Germany's abuse commissioner has called for stronger powers for prosecutors in the wake of the convictions for four men in the 'Elysium' child pornography case. Sexual violence is widespread, an NGO in Germany warned. (08.03.2019)

German inquiry calls for end to silence on child abuse