Child marriage in Iran forces girls into a life of oppression | Asia | An in-depth look at news from across the continent | DW | 11.09.2017

Girls in rural Iran are often forced into marriage at a young age. Protected under Iranian law, the practice is leading to broken families and a generation of children lacking prospects or perspective. 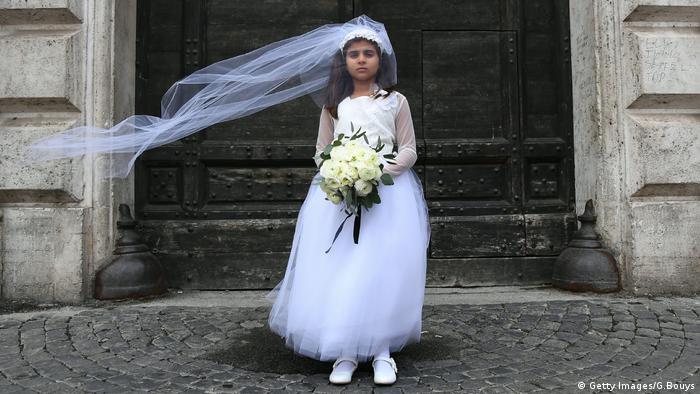 Leyla was 17 years old when she was married off by her parents in exchange for goats. She can still remember how she had been beaten up by her father before she was taken to the wedding ceremony.

Leyla comes from a village near Esfarayen in the northeast of Iran, and her story is not uncommon for poor young girls from rural and tribal areas in the Islamic Republic. There have also been reports of girls as young as 10 years old being forced into marriage.

Estimates from the United Nations children's agency, UNICEF, in 2016 indicate that 17 percent of girls in Iran were married before the age of 18. And according to statistics from the Iranian National Organization for Civil Registration quoted in 2015 by the Center for Human Rights in Iran, over 40,000 girls under the age of 15 had registered their marriages during the previous one year.

Sharia-based Iranian law states the legal age of marriage is 13 for girls and 15 for boys, but marriages can still be carried out at a younger age with the consent of fathers (or legal guardians) and the permission of a court judge.

Leyla told DW that the age of married girls from her village in North Khorasan province started at 11. "By the age of 16 or 17, most girls are married," she said.

Leyla also added that her brother, who lives in Iran's second-largest city, Mashhad, recently married off his eldest daughter at the age of 12, because he could not makes ends meet for his five children. 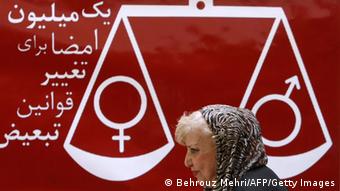 The legal age for marriage in Iran is 13

The problem of unregistered marriage

Majid Abhari, a sociologist at Shahid Beheshti University in Tehran, told DW that most unregistered marriages in Iran take place in border provinces like Sistan and Baluchestan, Khuzestan, Kurdistan as well as in North and South Khorasan.

About the social consequences of the phenomenon, Abhari said: "Due to huge age differences, couples in such marriages are usually sexually incompatible and it often results in extramarital affairs. They often face child-bearing problems. Child marriage also makes girls prone to sexually transmitted diseases and sexual infections. It can also lead to suicide, self-immolation and running away from home in some cases."

Leyla said both of her parents were drug addicts and poorly educated. "I wish I could have gone to school; I only attended until the fifth grade," she said. "After marriage, I had no choice but to move to Tehran to work in order to feed my children. Their father is a drug addict."

With three children, Leyla is the only breadwinner for the family of four. She said her husband often hit her and refused to work. "I am working sporadically as a tailor at home and sometimes I go cleaning," she said. "My 15- and 14-year-old sons also have to work to keep ourselves above water."

Sociologist Abhari identifies three categories of child marriages in Iran. "The first group marry off their kids based on decrepit customs like 'blood marriages' or 'navel string marriages,'" he said.

In tribal areas, girls are given away in so-called "blood marriages" as a means of resolving an enduring feud between two tribes. "Navel string marriages" are a form of arranged marriage determined when a child is born. A newborn's umbilical cord is cut symbolically, usually in the name of a cousin, or occasionally, a distant relative. The ceremony is a gesture pledging marriage between the newborn and the cousin or relative.

Another category of child marriage identified by Abhari is based on people in poverty seeking economic gain. These parents send away their daughters very young to the groom's house in exchange for a bride price, which depends on how beautiful the girl is or how rich the future husband is. There are also groups in Iran who believe girls should marry ideally before puberty.

Any hope for change?

In August 2017, Iranian civil activists and politicians took steps to expose the damage caused by child marriage with a statement urging an amendment to marriage law and an increase of the minimum age of marriage for girls and boys to 18. A part of the statement reads that early marriage is a form of child abuse and it violates children's rights, girls' in particular. They also called for criminalization of child marriages and unregistered marriages.

Iranian state media have also reported that lawmakers are currently putting together a plan for legally raising the age for women to be married and putting restrictions on child marriage. It was also reported that a senior Iranian cleric, Ayatollah Naser Makarem Shirazi, had given consent to the plan.

Fatemeh Zolghadr, a member of the Women's Faction in Iran's parliament, told Iran's Ilna news agency that a bill to amend the law on the legal marriage age was being prepared. Zolghadr added that some prominent religious figures had already given the green light for the amendment plan, but it still needs more support.

According to the UN Convention on the Rights of the Child, everyone under the age of 18 is considered a child and is entitled to all the rights included in the convention, which include the right of girls to be "free from all forms of discrimination, inhuman and degrading treatment, and slavery."

Ready for a one-of-a-kind taxi ride? Banned Iranian filmmaker Jafar Panahi won a Golden Bear at the Berlinale film festival in February 2015 for his unique film, "Taxi." Now it's opening in German cinemas. (20.07.2015)