Iran women bike against female cycling fatwa | News and current affairs from Germany and around the world | DW | 23.09.2016

A ruling by Iran's top religious leader banning women from cycling has led to angry social media users posting pictures of themselves riding their bikes in protest of the fatwa. 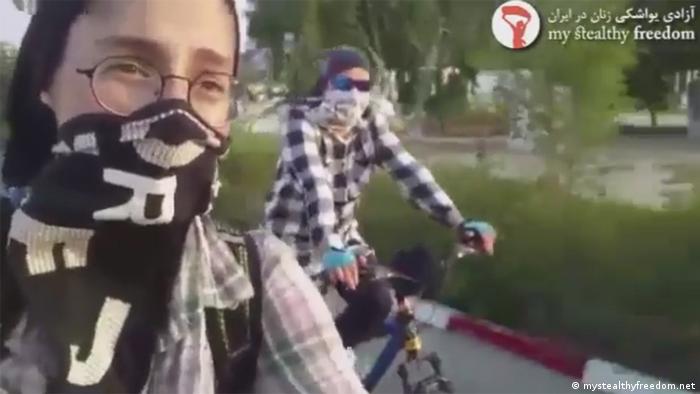 Iran's religious leader, Ayatollah Ali Khamenei, has angered women across the country by issuing an edict banning them from riding bicycles.

"Riding [bicycles] often attracts the attention of men and exposes society to corruption, and thus contravenes women's chastity, and it must be abandoned," Khamenei said on September 10, according to Iranian state media.

Female cycling enthusiasts regularly face criticism and some have even been attacked or arrested in the past.

Recently, a series of campaigns encouraging people to ride their bikes in order to lower air pollution has caught on in numerous Iranian cities, leading many, both men and women, to cycle more often.

Though there was no explicit law on the subject up to this point, a group of women planning a cycling event in the northwestern city of Marivan were reportedly arrested last July and made to pledge they would not do it again.

Adding one more item to a long list of forbidden or heavily regulated activities women must abide by, the now explicit ban caused many of them to respond in defiance by taking to social media and publishing pictures and videos of themselves riding their bicycles in protest of the Ayatollah's ruling.

Many of these posts were collected and published on the Facebook page "My Stealthy Freedom," an account administered by critical Iranian journalist Masih Alinejad, who has also posted several pictures on her personal Instagram profile.

One of the videos shows a young woman filming herself and her mother as they ride around Kish, a small Iranian island on the Persian gulf, their faces covered by bandanas to protect their identities.

The younger woman says she and her mother rented two bikes as soon as they heard about the ban, before addressing a message directly to the Ayatollah: "[Cycling] is part of our lives […] It's our absolute right and we're not going to give up."

The videos and pictures shared on "My Stealthy Freedom" and Alinejad's personal Instagram page have all received several thousand likes and comments, which the Iranian journalist puts down to the women's sheer anger at the decision. 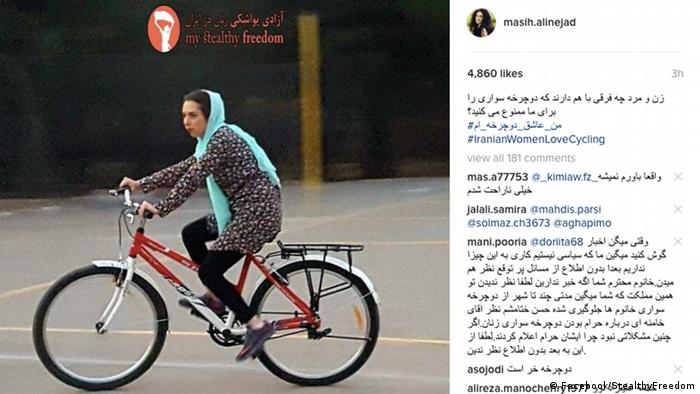 "It's absolutely shameful to hear such a backward [fatwa] against women in the 21st century," Alinejad tells DW.

Having noticed how Iranian women were widely mocking the ban on social media, Alinejad says she called on them through her Instagram to share their reactions with her and received numerous responses.

She sees this as one more piece of evidence of the commitment of these women to fighting for their rights despite the authorities' reluctance: "I strongly believe these acts will bring change. Women are the main agents of change as they push back from the Islamic Republic."

Masih Alinejad now resides in New York, from where she frequently writes about and campaigns for women's rights in Iran.

Her page "My Stealthy Freedom" attracted wide media attention in the past when it led a campaign encouraging women to resist Iran's strict dress code for women by posting pictures of themselves without their hijab, which they are obligated to wear whenever they are in public.

Iranian cyclist Bahman Golbarnezhad has died after a crash in the C4-5 road race in Rio de Janeiro. It's believed to be the first such death at a Paralympic Games since they began in 1960. (18.09.2016)