No hijab: an Iranian journalist offers women a stealthy freedom on Facebook | Germany | News and in-depth reporting from Berlin and beyond | DW | 28.05.2014

No hijab: an Iranian journalist offers women a stealthy freedom on Facebook

The Facebook page "My Stealthy Freedom" is another sign of social media's power. Journalist Masih Alinejad posted a photo of herself at the beginning of May - and virtually started a mass movement. 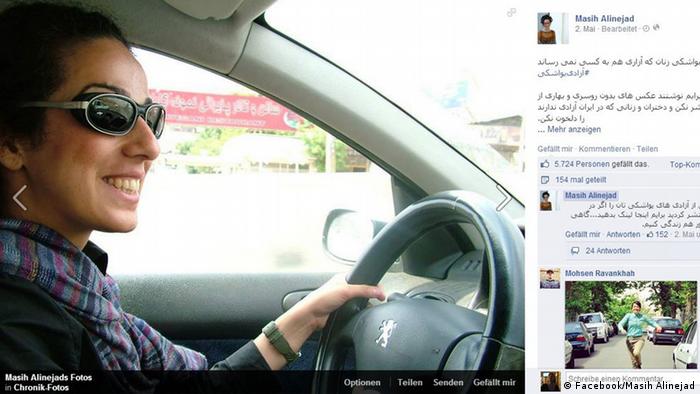 Masih Alinejad is behind the wheel of her car, driving through an Iranian city. And she's not wearing a hijab, the veil women have to wear in Iran. More than 375,000 people have liked Alinejad's Facebook page "Azadiye jawaschaki" (Stealthy Freedom) and more than 100 Iranian women have sent in photos that show them in public without the hijab.

It's their protest against the mandatory veiling, and they want the entire world to see it.

"The page is a place for Iranian women to show the world how they really are," Masih Alinejad told DW.

The women, whose names are not revealed, share their moment of stealthy freedom in short texts.

There's a picture of a young woman without a hijab in the mountains.

"Mountains never hide themselves under covers," she writes in a message to Alinejad, "so when I go mountain climbing, I do not hide myself under covers either."

In another photo a woman is seen in a desert. She writes: "I have been waiting for such a movement to start and I hope some time soon these freedoms will not be stealth any more." 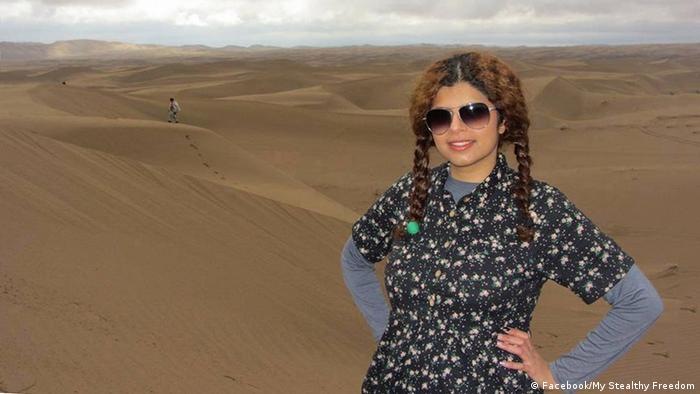 One young Iranian who sent her picture to "My Stealthy Freedom"

But is it still stealthy freedom if the whole world can see?

If publishing photos, which were taken in secret, on a Facebook page seems paradoxical to you, it reflects the situation in Iran. Many women have turned their homes into safe houses where they can move freely, but public spaces are a whole other story.

"With social media, Iranians can break open the barrier between private and public life," Alinejad says.

The country's strong moral laws are very much alive. That became clear again only recently, when six Tehran residents were arrested, because they had published a video of themselves dancing to Pharrell Williams' song "Happy." And they were not wearing hijabs. They were later released on bail.

"The day after her release, one of the arrested women posted a picture of herself online - without a hijab," says Alinejad.

A place for exchange and discussion 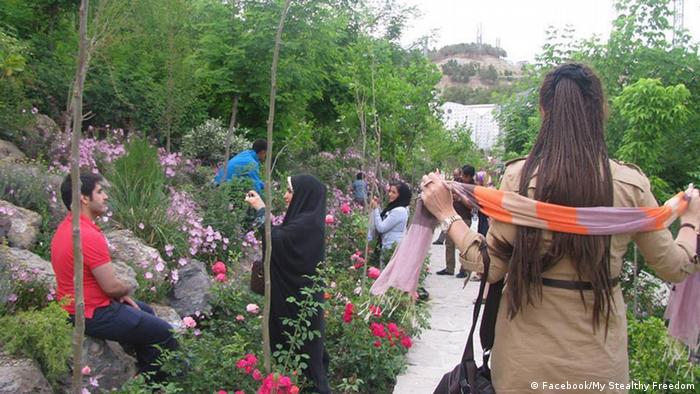 Some of the page's supporters have their picture taken in public places, like this park in Tehran

While removing your headscarf in public is not allowed in Iran, that's not to say it doesn't happen.

Some women on "My Stealthy Freedom" only allow themselves to be photographed from behind, and most take off the hijab in less frequented places or wear sunglasses to protect their identities.

But a few can be seen on the subway or even in Tehran's central Freedom Square - all without a headscarf.

Facebook has become a virtual safe haven - a place where the women's identities are more protected than in the streets. The social network is a forum for contact with like-minded people, a place to test reactions to your own behavior and a platform for discussion.

And there's a lot of that on "My Stealthy Freedom."

Some users say Iranian women have bigger problems than the veil. Others wonder whether their stealthy freedom isn't a paradox in itself.

"It's exactly this type of discussion that I wanted to facilitate as a journalist," says Alinejad, who lives in London. "It's a place where male and female Iranians with different opinions can meet and talk about how they feel, think and what they do in private. They don't have to be afraid of censorship, like in the Iranian public sphere. It makes them brave to see that they are not alone with their thoughts and actions." 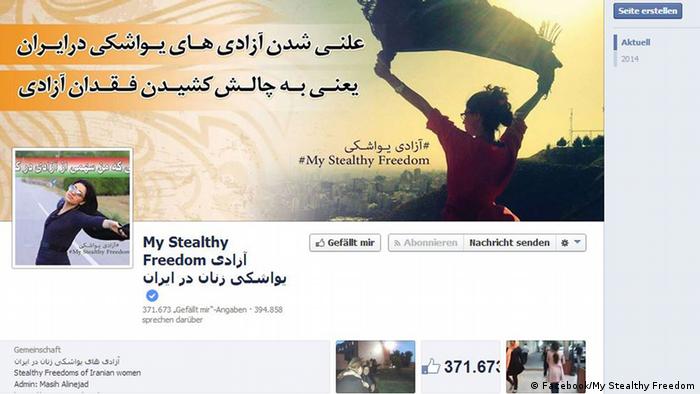 Without a doubt, social networks have accelerated the protest against mandatory veiling.

"My Stealthy Freedom" is gaining almost 10,000 likes per day. That's surprising for a country whose government restricts Internet access in general - and access to social networks in particular.

The consequences of this development, however, are not confined to the virtual world.

"Happiness is our people's right," says Iranian President Hassan Rouhani in response to the Tehran "Happy" video. "We shouldn't be hard on behaviors caused by joy."

But the president didn't make these comments in a cabinet meeting or write them in a pamphlet - he shared his opinions on Twitter.