Six young Iranians arrested for dancing on rooftops to the hit song "Happy" in a video posted on the internet have reportedly been released on bail. The release has yet to be confirmed by Iranian authorities. 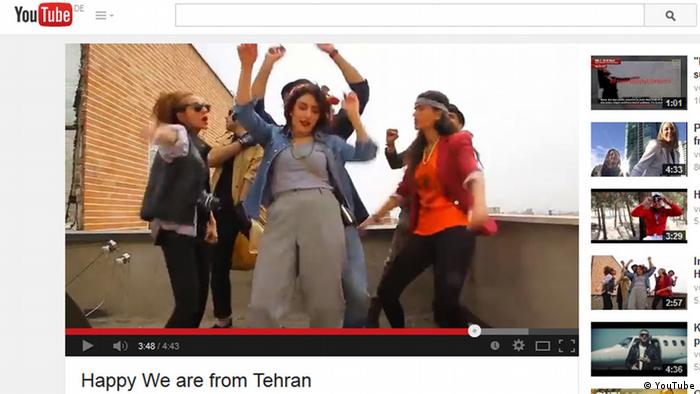 Reports of the release on social media were confirmed on Wednesday by Tehran-based fashion photographer Reihane Taravati, one of those arrested by Iranian police for making the video of three men and three unveiled women#link:http://www.youtube.com/watch?v=RYnLRf-SNxY# by US singer Pharrell Williams.

The International Campaign for Human Rights in Iran said the other dancers had also been released.

It tweeted: "All people who made the 'happy' video released today, except the director of video, a source close to the familes said."

There has as yet been no official confirmation.

The arrest provoked severe condemnation outside Iran, with Williams himself writing on Facebook that it was: "beyond sad that these kids were arrested for trying to spread happiness."

Authorities accused the six of committing an immoral act, according to Iran's ISNA news agency.

Islamic law in Iran requires women to wear a veil in public. Western pop music, dancing, mingling with the opposite sex and YouTube access are also forbidden.

The reports of the release came as an apparent message of support for the group was made by Iran's President Hassan Rouhani, who is visiting China.

A Twitter account believed to be run by his close aides quoted from a speech given by Rouhani in June 2013 shortly after his election, in which he said: "Happiness is our people's right. We shouldn't be too hard on behaviors caused by joy."

Rouhani has long claimed to want more social freedoms in Iran, but there is great resistance to change from traditionalists and ultra-conservatives who dominate the Iranian establishment.

dancing to the hit song "Happy"