Women spectators have again been banned from attending a sporting tournament in Iran. Despite pleas by human rights campaigners calling for Tehran to allow women to enter the stadiums, Iran continues to ban them. 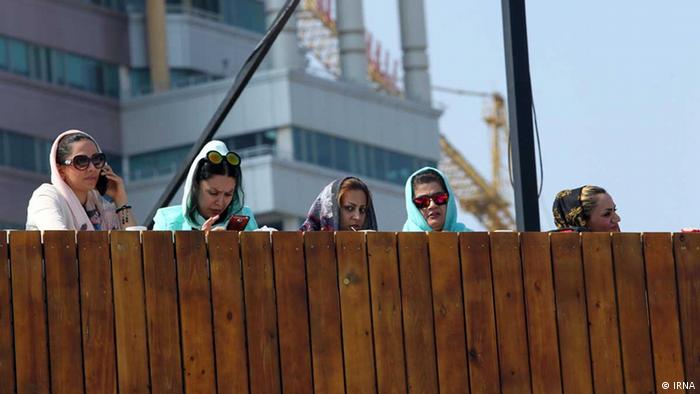 So far, not a single woman has been allowed to enter the stadium to watch the matches, causing ire among Iranian women and international female athletes who are critical of the ban.

Human Rights Watch, attempting to put Tehran's decision in the spotlight, has been running a digital advocacy campaign:

The #Watch4Women campaign has had no impact, though, on Iranian authorities - or volleyball's governing body.

Prior to the competition, the international body announced that it had received assurances from tournament organizers that "the event [would] be open to fans from all age groups and genders. This will include families and women."

But that failed to eventuate, and women were reportedly turned away at the turnstiles as they tried to enter the stadiums.

The FIVB, whose constitution stipulates that gender equality is key, has failed to step in and take action for the Iranian government's decision.

However, FIVB spokesman Richard Baker told DW that women were in fact allowed into tournament venues, directing us to this tweet.

Throughout the competition, television cameras reportedly zoomed in on shots of women in headscarves and shawls sitting around the beach court. News website Iranwire reported that the federation had issued special identification cards to female reporters who had travelled to Kish Island. Some of the special credentials, the agency reported, “were also given to the wives and the daughters of Kish Free Trade Zone officials.”

Women, other than a select few, were still banned from entering the tournament venue.

There was a small glimmer of hope that Tehran would revoke its decision when the International Campaign for Human Rights in Iran reported Thursday that some women were able to watch an event from the rooftop of a café, which overlooked the main court. However, the nationality of the female spectators was not clear.

But that was short-lived, and by the start of play on Friday, women without special passes were reportedly again being turned away at the gates.

Director of Global Initiatives at Human Rights Watch, Minky Worden, told DW prior to the start of the tournament that "the role of an international federation is to set and enforce the rules…and the FIVB has remained silent when [Iran] excluded women."

Worden added that there are women inside Iran who are big fans of volleyball, and that the FIVB ought to be supporting them - and not the hard-line political elements who want to exclude them from public life and from volleyball matches.

"[The women] are very courageous," she said, "they have contacted the FIVB, they have made an effort to exercise their right to attend stadiums to go to these matches."

Banning women, she added is "very serious...and a major setback."

Women in Iran are barred from watching sports on the basis that it may promote undue interaction between both genders. Females attending volleyball or other sporting events in Iran face the possibility of arrest, harassment or other forms of retaliation.

"In 2014, women who protested were arrested, and later, one of the women was given a jail term. The FIVB was surprised by this, but they should not have been. This has set up the current crisis for the FIVB and Iran," Worden said.

But the FIVBs reaction to the ban by authorities did not wash with many.

One follower of DW's Persian Facebook page said that men should boycott the stadiums. Another said that, "If Iran cannot follow international standards for equality, then it should not be awarded international sporting events."

"The Iranian teams are now out of the tournament," another wrote. "This is the result of them not letting women enter the stadiums," another user added.

Iran was knocked out of the tournament on Wednesday.

Three strikes and you're out

This is not the first time Iran has failed to comply with internationally recognized equal opportunity and anti-discrimination practices within the sporting arena.

In June last year, the FIVB held international matches in Iran despite women not being allowed to view the games.

However, the next test, says Worden, will be what happens in June in Tehran's Azadi Stadium (which contrarily means "freedom" in Persian) when Iran plays host to another world volleyball championship.

"Will this be the year that women can return to watching international volleyball tournaments in Tehran? That will be a major test," she said.

But, the question still remains: Why does a global sporting organization allow Iran to host international competitions when it fails to recognize and allow women to participate?

The International Volleyball Federation held a match in Iran this weekend and women were not allowed to view it. Why does a global sporting organization let Iran host venues, knowing they discriminate against women? (22.06.2015)

Iran authorities have decided to allow women to attend certain men's sports matches, deputy sports minister has said. An Iranian-British woman who had protested the law was recently pardoned by a court. (04.04.2015)