Iran authorities have decided to allow women to attend certain men's sports matches, deputy sports minister has said. An Iranian-British woman who had protested the law was recently pardoned by a court. 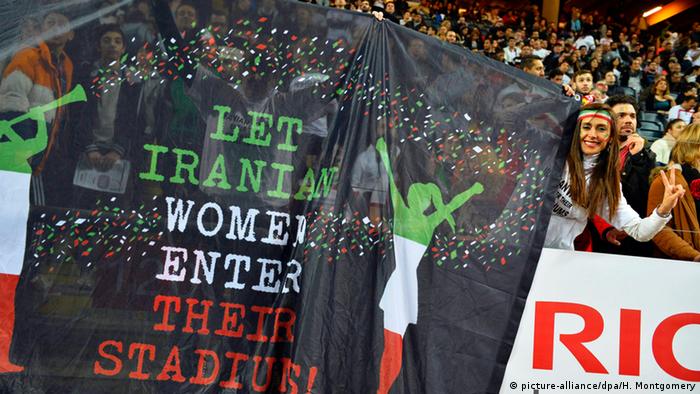 Iran's State Security Council has approved a plan by the sports ministry which would let women and families visit some sports events in the strictly Islamic country. The new policy will come into effect during this Iranian year, state news agency IRNA reported, citing Deputy Sports Minister Abdolhamid Ahmadi.

According to Iranian calendar, the year ends in March 2016.

Deputy Minister Ahmadi said some matches and stadiums would remain off-limits, but did not elaborate beyond saying it would "depend on the type of sport."

"Of course, in some areas of sport, families are not interested in attending nor is there a possibility for them to attend," he said.

Women have been forbidden from visiting games played by men since Islamic hardliners took power in the revolution of 1979. The law stems from the intent to keep crowds of unrelated men and women from mixing publicly. Exceptions have been made in cases of foreign women living in Iran, who wanted to attend matches by their visiting national teams.

Ghavami pardoned by the court

Earlier this week, an Iranian court pardoned a British-Iranian women Ghoncheh Ghavami, who had been arrested while protesting the segregation last June in front of Tehran's Azadi Stadium.

Ghavami was convicted to a year-long prison term for spreading anti-state propaganda, according to Iranian media, but was released on bail after three weeks in jail. On Thursday, Britain's Foreign Office confirmed the Ghavami had been pardoned, while voicing concern about the fact the women was still subject to travel ban.

In January, Iran announced it would allow only foreign women to watch men play volleyball during the 2015 Asian Men's Volleyball Championship in August. The authorities, however, maintained that Iranian women would still be banned.

Iran recently lost a bid to host the 2019 Asian Cup United Arab Emirates, with some officials saying that rules forbidding women from watching football in stadiums played a role in the decision.

British Prime Minister David Cameron has met with Iran's president, the first such talks since the 1979 revolution. Cameron later told the UN General Assembly Iran could be "part of the solution" in the Syria crisis. (25.09.2014)

Ethiopia: Army says it is in control of Tigray capital 49m ago