A study has found half of chicken meat at discount supermarkets is contaminated with antibiotic resistant germs that pose a major health risk. The results indicate antibiotics are overused at industrial poultry farms. 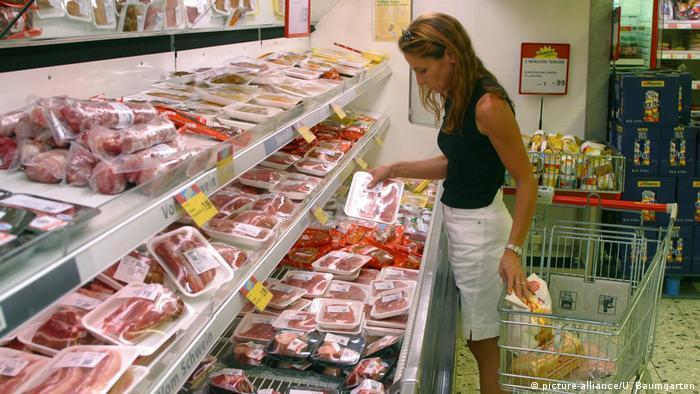 More than half of chicken meat sold at low-cost supermarkets in Germany is contaminated with antibiotic-resistant bacteria, according to a probe of meat samples.

The environmental and consumer organization Germanwatch described the results of their study on Tuesday as "an alarmingly high resistance rate" that shows the overuse of antibiotics in industrial poultry production is endangering human health.

Germanwatch had 59 chicken meat samples from large discount supermarkets analyzed at a university lab and found that 56% were colonized by antibiotic-resistant germs. The meat samples came from the four largest slaughterhouses in Germany.

Responding to the study, the Federal Agriculture Ministry said it "suggests that too many antibiotics are used in the poultry industry."

Bacteria-fighting drugs have become less effective due to overuse in humans and animals as bacteria adapt and evolve. The more antibiotics are used, the greater bacteria are able to boost their defenses.

Experts said that bacteria are killed when chicken is properly cooked, but that humans can become sick or even die through cross-contamination with uncooked foods in the kitchen, such as on a cutting board. Workers at industrial chicken farms can also be exposed to germs through inhalation. 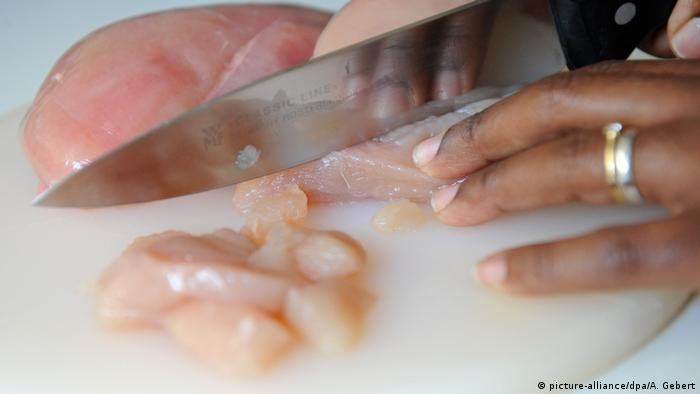 Antibiotic resistant microbes can contaminate uncooked foods in the kitchen

Probes of 12 chicken meat samples from small-scale farmers were also conducted and only one was found to have antibiotic-resistant germs. In another analysis, six samples from ecological farms found no resistant pathogens.

Germanwatch linked the differing results to the overuse of antibiotics at industrial poultry farms.

The situation will only improve if the government prohibits veterinarians from prescribing antibiotics to "compensate for the consequences of catastrophic housing conditions and turbo-breeding in the production of cheap meat," Germanwatch said.

Although German poultry farmers have halved their antibiotic consumption since 2011, it is still twice as high as in Denmark, Great Britain or Austria, according to the environmental and consumer organization.

Germanwatch demanded that the use of antibiotics at poultry farms be dramatically reduced and that chicken meat be labeled as coming from industrial farms to better inform consumers.

On September 3, 1928, Alexander Fleming discovered penicillin by chance. Even then he warned of possible resistance. Now there are antibacterial molecules to which bacteria does not become resistant: Artilysin. (03.09.2018)

We have long known that bacteria can become resistant to antibiotics. Now, British researchers have found that germs multiply much faster after becoming resistant, than they did before. (30.01.2017)

Authorities in Berlin are warning that visitors to a notorious night club may have been exposed to life-threatening Neisseria meningitidis. The KitKatClub is known for its kinky and anything-goes atmosphere. (04.10.2018)

Major changes to diet and farming are needed to allow the Earth to keep feeding the global population. The study's lead author told DW there's "little chance of staying within environmental limits" if no action is taken. (10.10.2018)