Chechnya, where stability comes at the price of secularism | Europe | News and current affairs from around the continent | DW | 07.04.2011

Chechnya, where stability comes at the price of secularism

In the Russian republic of Chechnya, the clock is being turned back as Islamic law creeps into public life. The state's leader, Ramzan Kadyrov, is pursuing policies that promote polygamy and headscarves for woman. 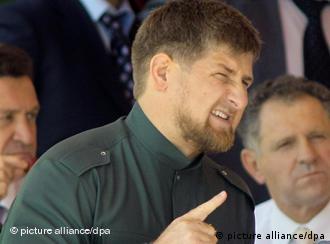 Alongside a new mosque in Grozny, cranes hover around a concrete skeleton. The first skyscraper is being built in the Chechen capital of Russia's majority Muslim republic in the Caucasus - almost 50 floors with a helicopter landing pad on the top. Its reflective surface will provide a backdrop to broad streets and designer shops, a modern touch in a city scarred by two recent wars.

But behind the facade, this society's clock is being turned back. Women face coercion to wear headscarves as part of a "virtues" campaign, including an Islamic dress code. Men are allowed polygamous marriage and alcohol is forbidden, though it remains tucked away inside shops.

However, Ramzan Kadyrov, the ruling governor of Chechnya who's just been reappointed for another five years, says for Chechnya's 1.2-million population, it's all voluntary.

To outsiders, the scene is a mixture of the medieval and pseudo-religious machismo. Kadyrov seems, however, unperturbed by the foreign criticism.

"Don't fantasize. Don't portray us as unsociable beasts. We're only serving our people," he says. 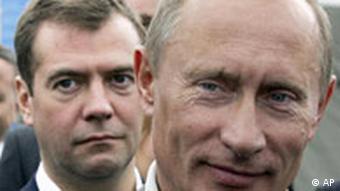 Putin (right) and Medvedev have not pushed for sanctions against Chechnya

And, she says, the Kremlin lets Kadyrov have a free hand as long as he suppresses insurgency. Last year, he even endorsed paintball guns being fired at women whose dress was considered by conservative men to be too revealing.

"When dozens of women in the streets of Grozny were shot at from paintball guns in the summer of 2010, Kadyrov said clearly that he did not know who the shooters were," said Lokshina. "But, if he could find them, he would actually give them an award."

Lokshina points out that federal Russia has a secular framework; that the European Court of Human Rights in more than 150 cases is still waiting for Russia - under President Dmitry Medvedev and particularly Prime Minister Vladimir Putin - to impose sanctions.

"Wearing Islamic dress in Chechnya is contrary to Russia's constitution. Russia is a secular state. But, Kadyrov is doing this and the Kremlin does not intervene," she said.

Women who flout the headscarf requirement are often treated as potential prostitutes. Lokshina says she has seen letters containing threats to use real guns and ammunition instead of paintballs. Kadyrov, however, declares his love for women.

"I love my wife, I respect her. With her I'm happy," Kadyrov says. "But when I see a woman who is more beautiful than her, why should I become restive? Islam allows for marriage to the other one, when my first wife is not against it. If I'm healthy, have no financial problems, why should I be distressed through loving another woman but not being able to marry her?" 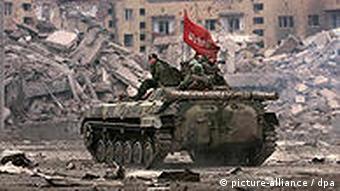 Chechnya has been beset by two serious conflicts in recent years

One of a kind

"First and foremost, he is the only governor in the Russian Federation who has control over law enforcement and security agencies. This is unprecedented. No one else does. And so Chechnya today exists as a state within a state, completely outside Russia's legal framework. And whatever Kadyrov says is being treated like law," she said.

Kadyrov, however, sees Chechnya well on its way to establishing something new in the Caucasus.

"A democracy like ours can not be found anywhere else. Everything that we do serves the goal of reinvigorating the Chechen people. That's why we pursue a policy of morality. Our efforts are supported by Chechens. Ninety-two percent of the population is for us. Only a very few - 0.34 percent - are against us," he said.

Lokshina acknowledges the contradiction: A supposedly Islamic-style leadership pitched against an Islamist insurgency across the mainly Muslim North Caucasus. She adds that recommendations by European institutions for civil rights improvements in the Caucasus are being ignored.

"The recommendations and the reports just remain there on paper. There has been no progress on those cases as yet."

Russia has been increasingly frustrated by the situation in the volatile northern Caucasus, where neither warfare nor economic investment has proven effective. Instead, the violent separatist insurgency has spread. (25.01.2011)

Trial begins in killing of Chechen refugee dissident in Austria

Three men go on trial in Vienna on Tuesday for complicity in the murder of Chechen dissident Umar Israilov. But attention has fallen on one man who isn't present: Prosecutors claim links to the Chechen president. (16.11.2010)

Tuesday's dramatic raid on the Chechen parliament was a blow to Russian claims that Chechnya has been pacified. Commentators believe that only a change of policy can end the long years of violence and unrest. (20.10.2010)