Chechnya still a long way from stability, say experts | World| Breaking news and perspectives from around the globe | DW | 20.10.2010

Tuesday's dramatic raid on the Chechen parliament was a blow to Russian claims that Chechnya has been pacified. Commentators believe that only a change of policy can end the long years of violence and unrest. 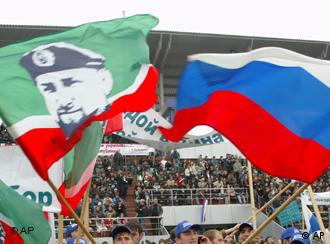 The Kremlin remained bullish after the separatist attack on the Chechen parliament in Grozny on Tuesday, in which three people were killed.

"As always, they (the militants) failed," Russian Interior Minister Rashid Nurgaliyev said at a televized meeting at the local interior ministry. The minister, by coincidence on a trip to Grozny, said the Chechen gunmen were intercepted by interior ministry troops, and that the operation by the security forces to free the deputies was a success. He then claimed Chechnya was "stable and safe."

But since Russia officially ended its "counter-terror" operation in the province in April 2009, there have been plenty of signs that Chechnya is far from pacified. The double bombings carried out by two suicide bombers on the Moscow metro in March, which killed 40 and wounded more than 100, showed that separatist violence has the power to reach the Russian capital. 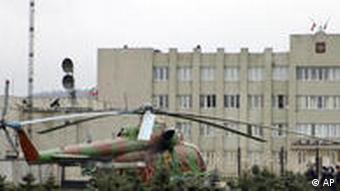 The Chechen parliament was attacked Tuesday

Uwe Halbach, researcher at the German Institute for International and Security Affairs (SWP), believes the violence has actually been increasing in the region since 2009.

"What we have in Chechnya is a trend that is also evident in other republics in the northern Caucasus, such as Kabardino-Balkaria and Dagestan," Halbach told Deutsche Welle. "Attacks are being very deliberately directed at security organizations and authorities, in this case the parliament."

Chechnya unilaterally declared independence from Russia in 1991, following the collapse of the Soviet Union. In 1994, the first Russian troops marched in to put the separatist movement down. The destruction and reoccupation of the capital city Grozny in 1996 represented only a partial resolution, and the ceasefire remained fragile.

The Russian soldiers returned in 1999, starting what has become known as the second Chechen war. This military offensive lasted until the spring of 2000 and ended with Russia's military occupation of the province. But the underlying conflict lingered, and Chechen resistance has continued since then, mostly in the form of guerrilla attacks on civilian targets in Chechnya, neighboring Dagestan and Russia itself.

Chechnya has been governed by presidents loyal to Moscow since 2003. Achmat Kadyrov was killed in a bomb attack in 2004 and succeeded by his son Ramzan Kadyrov, who has been criticized for using extra-legal measures.

But while Kadyrov's government faces a violent front of rebels who want to turn Chechnya into an independent Islamic state, many Chechens have actually come to support the president in recent years.

Ivan Sukhov, Caucasus correspondent for the independent Moscow newspaper Vremya Novostyey, told Deutsche Welle, "In the last few years, Ramzan Kadyrov has almost become a figure symbolic of the Chechen idea - the man who defends ethnic Chechen interests. That's why many who fought for Chechen freedom and independence from Russia have joined him. Now there is a division in the movement."

Gerhard Mangott, Russia expert with the Innsbruck institute for political science, says that three leading Chechen rebels have now declared themselves against the idea of turning the republic into a Muslim emirate. Instead, they favor a nation state based on the Chechen ethnicity. But it is this group that is apparently responsible for this week's attack on the parliament. 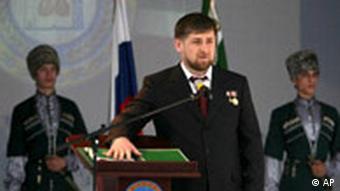 "This group has abandoned Doku Umarov, who leads the Islamist movement," he said. "It is certainly probable that this group started (this week's) attacks to show it is capable of executing a massive strike on the center of President Kadyrov's power."

Mangott also notes a significant increase in rebel activity in the region in the last few months, particularly in Dagestan and Ingushetia, another Russian republic bordering Chechnya. He believes the Russian government's attempts to stabilize the region have all failed so far. Both the tactic of military invasion and the tactic of targeted attacks on rebel leaders using secret service intelligence have so far yielded little result. Even Russian President Dmitry Medvedev is apparently opening up to the idea that the solution can not only be a military one.

Halbach also believes that Russia should rethink its strategy in the northern Caucasus. Development strategies that focus on social and economic problems are also necessary, and Halbach believes the European Union should support such initiatives and actively encourage Russia to seek alternatives to military action.

But Russia continues to declare the troubles in the region a domestic issue, making intervention in the form of international development aid impossible.

"I think there needs to be dialogue between the EU and Russia about the alarming security situation in this region," Halbach said. "It is not just Russia's 'internal foreign country,' not just a crisis region on Russia's periphery, it is also a region on the edge of Europe, and it is certainly in Europe's interests to know whether we can expect a further escalation in violence there, or whether it will be possible to limit it."

Violence broke out in Russia's Caucasus province of Chechnya on Tuesday. At least seven people died when Separatist Islamist militants tried to storm parliament. The raid was put down by loyal security forces. (19.10.2010)

Since German reunification, Berlin and Moscow have built a strategic partnership based on common economic interests. As a result, Germany has faced accusations that it neglects human rights and democracy in Russia. (30.09.2010)

Polish police arrested Akhmed Zakayev after the leading Chechen separatist arrived in Warsaw to attend a gathering. Russia, which had issued the warrant for Zakayev, had a close eye on whether Poland would arrest him. (17.09.2010)