Bayern Munich and Leverkusen made it three wins for German clubs in the first week of Champions League action. Thomas Müller continued his brilliant scoring form, while Javier Hernandez hit his first goal for the club. 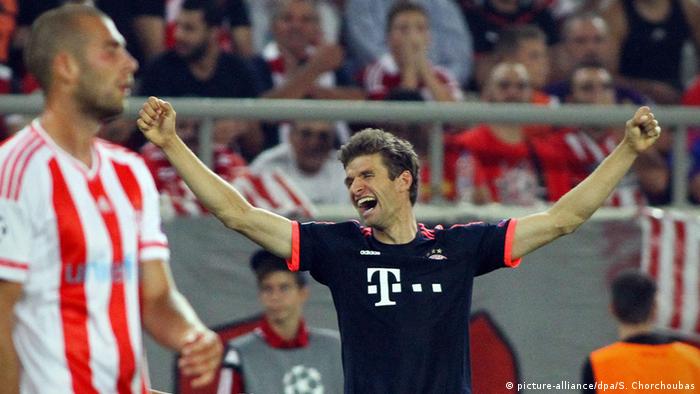 A brace from Thomas Müller and one from substitute Mario Götze fired Bayern Munich to a comfortable 3-0 win at Greek champions Olympiacos.

The German champions, competing in the tournament for the 19th time since 1992, labored for long spells in their 200th Champions League encounter with Müller highlighting once more his importance to the side.

His 51st minute strike sent the Bavarians on their way, before Mario Götze came off the bench to score a second with two minutes left. Müller scored from the penalty spot in stoppage time to make it eleven goals in seven club and international games this season.

Bayern's two center-backs, Jerome Boateng and David Alaba, failed to clear a number of high-balls from the Greek side in the first 25 minutes. Ideye Brown should have done much better with two headers from inside the box, but both landed comfortably into the arms of Manuel Neuer.

Douglas Costa was key to most of Bayern's positive first-half play, the Brazilian establishing himself as one of the club's most important players in a few short months. Costa had a shot saved on 32 minutes before he set up Lewandowski whose header was cleared off the line three minutes later.

Bayern struck six minutes into the second half with Müller's attempted cross from the right wing - which he later admitted to - beating Roberto who was a couple of yards off his line. With Bayern in front, Lewandowski was one player offered a deserved break when he was replaced by new boy Kinglsey Coman.

The lack of playing time, though, for substitute Götze, who impressed during Germany's recent internationals, was a cause of frustration for Bayern supporters. But when he did come on, he made a brilliant impact: he showed quick feet to beat his initial marker before dribbling past Manuel da Silva and then firing the ball past Roberto. Götze has now scored 10 Champions League goals in 40 appearances.

Coman was fouled a minute later giving Müller the chance to net his 30th Champions League goal from the penalty spot. He delivered and confirmed three points for Bayern on Matchday One. An extra boost for Pep Guardiola's men was the 2-1 win for Dinamo Zagreb against English Premier League side and likely rivals for first place in the group, Arsenal. 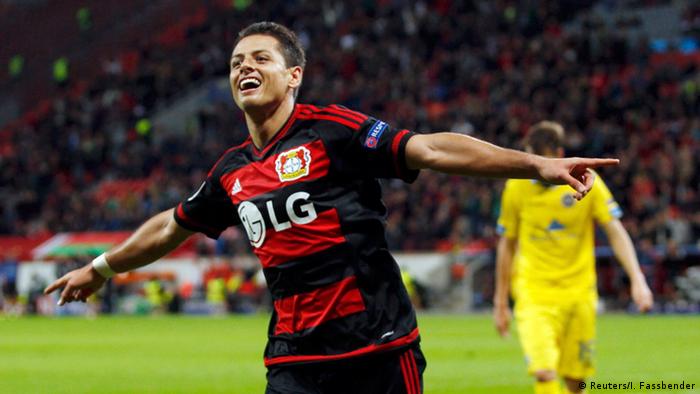 Admir Mehmedi opened the scoring in the fourth minute before an equalizer from Nemanja Milunovic silenced the home crowd. But Leverkusen's quality showed in the second half with Hakan Calhanoglu and Javier Hernandez netting to record the club's sixth win in seven Champions League home matches.

Defeat to newly-promoted Darmstadt on Saturday convinced head coach Roger Schmidt to include Mehmedi, Kevin Kampl and Javier Hernandez in his starting line-up. Their last three goals in all competitions came in the win over Lazio at home, a qualification victory that secured Leverkusen's spot in the lucrative Champions League.

Former Freiburg forward Mehmedi delicately curled the ball home with the outside of his foot early on to take the lead. BATE Borisov, the Belarusian champions, showed signs of nerves at the back. BATE has competed in Europe's top competition five times and their 3-1 win over Bayern Munich in 2012 was their biggest victory in the Champions League.

Milunovic's leveler was a blow to Leverkusen, but when the experienced Aleksandr Hleb came off after half an hour, the momentum returned to the hosts. Three minutes after the restart, Leverkusen edged back in front. Karim Bellarabi charged at the BATE defense, but instead decided to pass to Calhanoglu inside the box and the attacking-midfielder's finish struck defender Denis Polyakov and beat Sergei Chernik.

Kampl looks to have taken to life back in Leverkusen well after spending most of his youth career at the BayArena. Stints at Borussia Dortmund and RB Salzburg had mixed success; his relationship with former Salzburg coach Schmidt a deciding factor in his return to the club. He was involved in the third goal, laying off intelligently for 'Chicharito' who drilled his first goal under the BATE keeper.

Calhanoglu has been directly involved in eight of Leverkusen's last 10 Champions League goals and his second to round off the evening was the simple task of converting from 12 yards after a handball inside the box.

Schmidt's men top the group after the first round of fixtures after Roma and Barcelona were tied at 1-1 at the Olympic Stadium.

Borussia Mönchengladbach's troubles continue after a 3-0 defeat in Spain to Sevilla. Meanwhile, German Cup winners Wolfsburg pick up three points at home courtesy of a first goal from their big summer signing. (15.09.2015)

The UEFA Youth League is here to stay

Academies are doing everything to create the best football education. And now UEFA is offering a 'mini-Champions League'. DW's Ross Dunbar visited Leverkusen to see the side's first Youth League game of the campaign. (16.09.2015)

Champions League: All results and tables

The 60th year of the European Cup will be special regardless of the winner. Here are the fixtures, results and tables from the group stages of the 2015/16 UEFA Champions League. (16.09.2015)