Borussia Mönchengladbach's troubles continue after a 3-0 defeat in Spain to Sevilla. Meanwhile, German Cup winners Wolfsburg pick up three points at home courtesy of a first goal from their big summer signing. 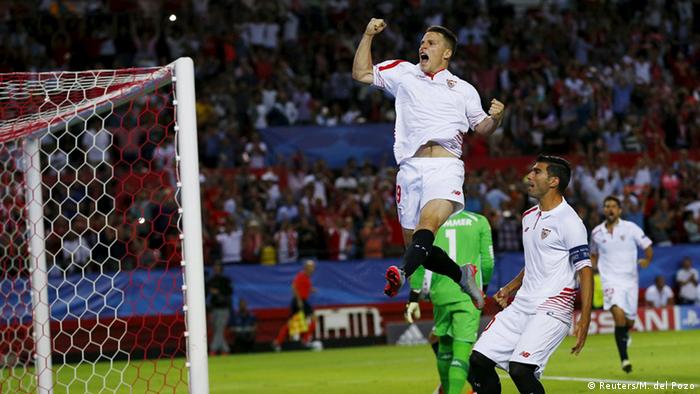 Confidence is scarce in the Borussia Mönchengladbach camp after four successive defeats in the Bundesliga - the worst start to a campaign in the club's history. And so, returning to the Champions League/European Cup for the first time in 37 years wasn't exactly the best antidote for their dismal domestic form.

The Andalucians squandered one of their three spot-kicks inside a quarter of an hour in the second half, with Kevin Gameiro and Ever Banega converting to help fire Unai Emery's men to a 3-0 win. Substitute Yevhen Konoplyanka carved out a late goal, but was aided by some questionable goalkeeping from Yann Sommer.

Emery's free-flowing, attacking team caused problems for Gladbach's fragile back four right from the start. Vitolo hit the woodwork after five minutes before former Arsenal striker Jose Antonio Reyes blazed over from inside the six-yard box.

Roel Brouwers' glancing header a minute later was a test of Sevilla's defensive capabilities, but those were few and far between. At the other end, Gameiro's diving header landed in the side-netting, while Sommer produced a stunning save to deny the French striker the opener.

Favre's instructions at the break went out of the window within two minutes. Vitolo went down and Gameiro scored the opener for the Spaniards. Less than 60 seconds later, Vitolo tumbled easily in the box, but this time Gameiro's spot-kick smashed against the crossbar and was cleared desperately by the Gladbach defense.

There was no debating the third penalty kick, though, on 65 minutes. Tony Jantschke, returning to center-back, dived into a challenge with Gameiro and had no complaints about the decision. Gameiro was nudged off penalty duties by all-encompassing midfielder Banega and the Argentine doubled the home side's advantage.

Gladbach's misery was compounded when, six minutes from the end, Konoplyanka's delivery from the right-wing was carelessly parried into his own net by Sommer. The Foals welcome Manchester City to Borussia Park in a fortnight, the English league-leaders continuing their poor record in Europe by losing at home to Juventus. 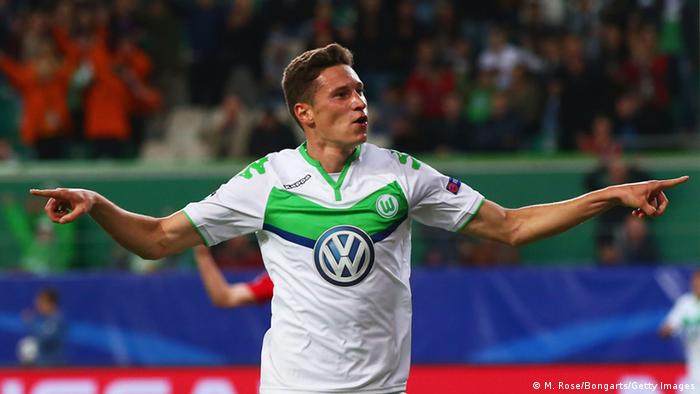 The 21-year-old opened his club account just before the half hour mark to secure three points for Dieter Hecking's men, who were comfortable without upstaging their Russian opponents. Draxler's debut came on Saturday, but the Wolves could only manage a goalless draw at FC Ingolstadt.

Andre Schürrle and Max Kruse flanked the former Schalke attacking-midfielder who played in support of Dutch forward Bas Dost. Chances were limited early on in front of the 20,000-strong crowd until Dost headed over from close range in the 10th minute.

Without the ball, CSKA was compact and difficult to break down from open play. A wonderful one-two combination between Kruse and Schürrle almost unlocked the door, but the former Chelsea attacker was denied by experienced keeepr Igor Akinfeev.

CSKA managed to restrict Wolfsburg to shots from long-range in the first half. Schürrle dashed inside from the right, but then sliced his 30-yarder wide, while Luiz Gustavo struck wide from further out as the clock ticked towards the interval.

But five minutes before the break, Kruse turned into space on the wing, floated in a lovely cross for the well-timed run of Draxler whose header left Akinfeev with no chance of keeping the ball out. Draxler, in his 39th appearance in European club competition, secured possession in attack for the Wolves and took on a more orthodox playmaking role than predecessor Kevin de Bruyne.

Nicklas Bendtner came on at half time, replacing Dost, and linked up well with Draxler as Wolfsburg controlled the tempo of the game. Hecking's men created no further chances with the exception of a weak shot from Schürrle in the 75th minute. The Wolves are now unbeaten at home in 25 games, their last defeat coming at the hands of Bayern Munich in 2014.

Champions League: No time like the present for Bayern and Leverkusen

Bayern Munich and Bayer Leverkusen will be looking for the perfect start to the Champions League group stages on Wednesday, against Olympiacos and BATE Borisov respectively. Taking the next step is crucial. (15.09.2015)

Berthold: 'It will come down to Dortmund and Bayern'

Thomas Berthold won the World Cup in 1990. Now, every week, he'll be telling DW News and Bundesliga Kick Off! what he thinks about the Bundesliga. We chatted to him about Bayern, Dortmund and his troubled ex-club. (14.09.2015)