Members of Chancellor Angela Merkel's CDU have been found cooperating with the far-right AfD in at least 18 cases. Merkel has promised serious consequences should members of her party work the far-right populists. 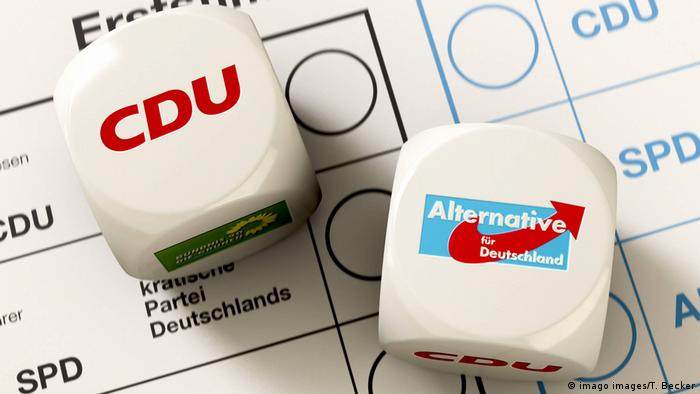 A new report by German public broadcaster ARD has shown that in at least 18 cases in eastern Germany, the center-right Christian Democrats (CDU) and the far-right Alternative for Germany (AfD) have formed coalitions, despite the CDU at the national level having vowed to never to work with the nationalist, xenophobic AfD.

The program "Report Mainz" said it had discovered that in many towns in the states of Saxony and Thuringia, the two parties had formed coalitions for municipal governments. There was also a case in the state of Saxony-Anhalt where the CDU had formed a legislative group with a man known to spread extreme right-wing propaganda online and participate in neo-Nazi events and marches.

Did they or didn't they?

The CDU in Sachsen-Anhalt, in the north of Germany, was one of the states identified in the report to have made such a coalition; however, they refuted these claims. "There is not and was not a coalition in the local council of Eilsleben," said the CDU chapter of Borde on Wednesday.

According to the Borde CDU party, an AFD council member had begun working closely together with the CDU but was then stopped. "Close association and cooperation with far-right extremists are prohibited; accordingly this cooperation was ended."

The local CDU party in Magdeburg painted a similar picture of disconnect between local and federal levels. The were several council decisions to work in conjunction with the AfD. Following an official decision from the party at the federal level the Magdeburg CDU party ended the cooperation with the local AfD party.

When the federal party gave out this policy is not known.

The increasing prevalence of CDU-AfD cooperation comes days after it was revealed that a member of the neo-Nazi NPD was elected to a city council in the central state of Hesse in central Germany. The fact that local members of Merkel's CDU and the center-left Social Democrats (SPD) had voted for the man prompted widespread criticism across Germany.

Speaking with German radio station Deutschlandfunk, the leader of a democracy and far-right research center in Hesse, Reiner Becker, said that a party like the CDU working with the AfD would normalize the AfD's views, which are openly euroskeptic and Islamophobic.

Becker warned that Germany was wringing its hands about the far-right without looking deeper into the reasons extremists were getting elected. There are large "gaps in representation," when it came to Germany's traditional parties, he warned, who were ignoring this fact at their peril.