Spanish Prime Minister Mariano Rajoy asked Carles Puigdemont to abandon the independence drive as a prerequisite to talks. The Catalan parliament is expected to unilaterally declare independence from Spain next week. 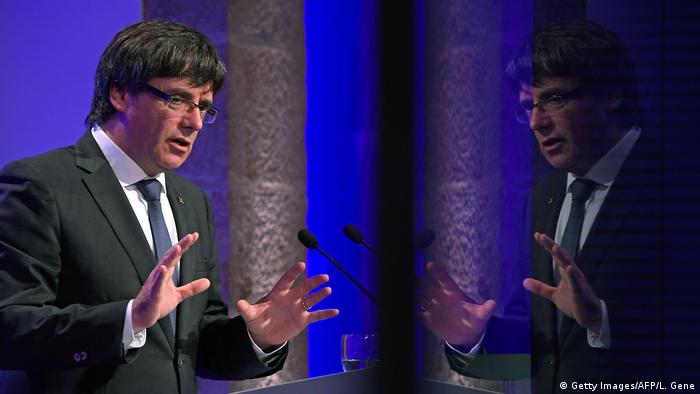 Spain on Wednesday turned down calls by Catalan President Carles Puigdemont for mediation to find a way out of the violent political crisis sparked off by the region's controversial referendum for independence on Sunday that ended with a rash of violence that left hundreds injured.

"If Mr. Puigdemont wants to talk or negotiate, or wants to send mediators, he knows perfectly well what he must do first: Return to the path of the law," Prime Minister Mariano Rajoy's office said in a statement.

Rajoy was responding to a call for mediation by Puigdemont made earlier during a televised address.

"This moment calls for mediation. We have received various offers in the last hours and we will receive more," Puigdemont said. "But we have never received a positive response from the state."

Puigdemont criticized Spain's King Felipe VI who on Tuesday lashed out at "irresponsible behavior" of the Catalan leaders. The Catalan leader accused the king of ignoring the Catalans by calling on them to give up their bid for independence. The king's address did not mention those injured during the vote.

"The king has adopted the (national) government's position and policies which have been disastrous with regard to Catalonia," Puigdemont said. "He is deliberately ignoring millions of Catalans."

Without specifically mentioning plans for an independence declaration, Puigdemont added: "I am sure that in the next few days we will show the best of our country when the institutions of Catalonia will have to apply the results of the referendum…Today we are closer than yesterday to our historic wish."

Catalonia is expected to declare independence as early as Monday, when a special parliamentary session has been called to evaluate the results of the October 1 vote and discuss the plan for secession.

Mireia Boya, a Catalan lawmaker from the pro-independence Popular Unity Candidacy (CUP) said it would be "a plenary to proclaim the republic" of independent Catalonia.

According to the Catalan government, 90 percent of the people voted for independence in Sunday's referendum, which was declared illegal by Spain's Constitutional Court and was marred by police violence. But turnout was only about 43 percent as Catalans who favor remaining part of Spain mainly boycotted the ballot.

No takers for mediation call

European leaders have so far sided with Spain and have called on both sides to talk with each other.

European Commission Vice President Frans Timmermans said on Wednesday there was a "general consensus that regional government of Catalonia has chosen to ignore the law when organizing the referendum."

During an emergency session of the European Parliament in Strasbourg on Wednesday, leaders from the two biggest party groups warned Catalan leaders not to forge ahead with independence.

Germany said on Wednesday that it hoped tensions between Madrid and Catalonia would soon calm down, but emphasized the conflict was an internal Spanish matter.

"Chancellor Merkel is not pursuing a mediation mission. It is an internal matter for Spain," he said.

Pique to carry on for Spain despite Catalonia backing

For months now the media in Madrid have taken a hardline course against the Catalan independence referendum. The Spanish government's response to the vote on Sunday inspired a change of heart. (04.10.2017)

Former Catalan President Carles Puigdemont, along with two separatist allies, could now be extradited to Spain to face criminal charges.