Catalan separatist movement driven by more than just economics | Europe | News and current affairs from around the continent | DW | 04.10.2017

Some 700,000 people took to the streets in Barcelona to protest police violence during Catalonia's referendum. Now, separatists are hoping for a declaration of independence. DW's Mariel Müller reports from Barcelona. 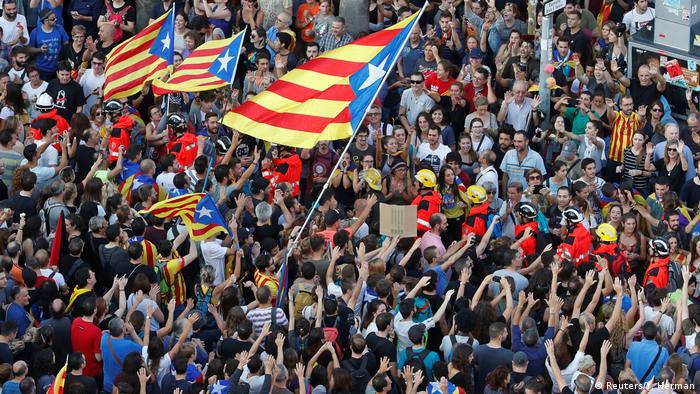 It feels like the dreadful morning after in Barcelona, and the rain just adds to the gloom. One of the highly charged protests took place on the square in front of the University of Barcelona. The majority of the protesters there were people in their mid-20s equipped with flags, megaphones and banners they used to vent their anger. "You can beat us but you can't silence us!" read one protest banner.

Anthropology student Irene is sitting in a yard at the University of Barcelona, where she explains that she is still angry "because we were told to be peaceful but they were not peaceful, so why should we be?" When she says "they," she is referring to the Spanish military police officers who provoked clashes with voters on Sunday, the day of the Catalan independence referendum. "We're the suckers who take the beatings and then we're supposed to turn the other cheek?" she asks rhetorically. 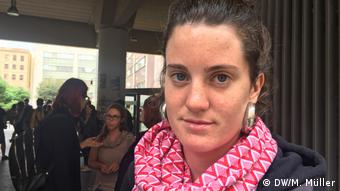 The 26-year-old, who does not wanted to reveal her surname, is a dedicated "independista," an advocate of independence, but not because Catalans are reluctant to share their wealth with the rest of Spain - something they are often accused of. She says that the Spanish government does not respect her culture and that it is endangered.

"The suppression of language - sure, if we were living in a dictatorship, but now? Who keeps the language alive?" he asks. "It is the people who speak it, the Catalan people." Salom says the people of Catalonia have been indoctrinated from an early age. "They have been told: 'You must respect and protect your language, your customs, your territory,' - as if they were in danger."

Salom comes from the Balearic Islands and has been living in Barcelona for years now. He would have preferred a legal referendum in Catalonia. 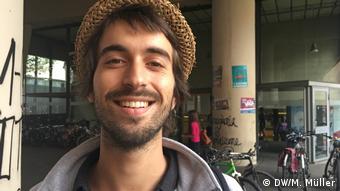 The 24-year-old is critical of the inadequate information provided by the "si" camp before the referendum. In his opinion, complex economic issues or Catalonia's role in the EU were not mentioned at all. "Instead, they simply appealed to the emotions of the Catalan people," he says. "But an important matter like this requires a rational decision, and not an emotional one." Salom finds that many people do not understand what the separation process entails. "They are like blind people fighting in battle without being aware of the possible outcome," he says.

Emotions and the economy

The pensioner Francisco Trigueros spent days in schools where the referendum was being held to make sure that the police would not shut them down before the official end of voting. "They didn't dare to touch us," he says proudly. 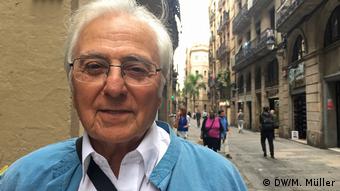 Trigueros: 'Every disadvantage' imposed by Madrid 'has made us stronger'

He accuses the Spanish government of financially squeezing the Catalans. "We pay too much and then the tax revenue goes to Madrid instead of us." It is a familiar argument. Critics accuse the Catalans of not wanting to share their wealth with poorer Spaniards. Fewer people are aware of the economic rift in Catalonia itself, however. The Center for Opinion Studies (CEO), the polling organization run by the Catalan government, has found that only 32 percent of people in Catalonia with a family income of less than 900 euros ($1,060) a month support independence. On the other hand, the 54 percent that support independence earn over 4,000 euros a month.

Trigueros says that "el sentimiento catalan," meaning the Catalan feeling, matters just as much as the economy. "If they hadn't curtailed the statutes of autonomy in 2010, the separatist movement would not have grown to be so large," he explains. But now, he says it is a "marcha forcada," a forced exit. "Every disadvantage that the Spanish government has imposed on us over the years has made us stronger." Trigueros fears that the escalation will continue. Although he wants to separate from Spain, he is not certain whether Catalan President Carles Puigdemont should declare independence. "People's nerves are on edge. No one talks to anyone anymore."

The anthropology student Irene agrees. "There was a time for dialogue- but now it is over. It is too late."

Hosts England looked to be exiting their own tournament, only to conjure a dramatic turnaround. It wasn't always pretty, or planned, but England's adaptability trumped Spain's strong sense of footballing identity.

Europe continues to struggle with a heat wave, though some have seen a respite from record high temperatures for the time of year. One of several wildfires has raged out of control on Greece's second-largest island.