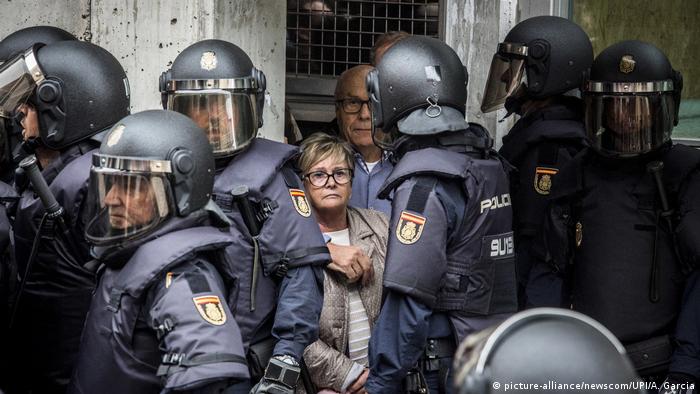 A day after federal police attacked voters during Catalonia's independence referendum, Spanish Prime Minister Rajoy has come out in defense of the police crackdown that left hundreds of voters hundreds injured.

Catalonia's regional leader Carles Puigdemont described Sunday's violent scenes as "the biggest day of gratuitous violence that we've experienced in the past 40 years," referring to Spain's democratic era, which followed the four-decade dictatorship of Generalisimo Francisco Franco, who harshly repressed Catalans. "Not only can it not happen again, but it can't remain unpunished."

Read more: Conflict over Catalonia far from over

The regional cabinet will "demand the withdrawal of all police units deployed in Catalonia," Puigdemont said. He announced a committee of inquiry on police brutality.

However, Rajoy reportedly defended the police's show of force in a series of meetings with political opponents and conversations with fellow EU leaders. A statement put out by the Spanish government following talks with France's Emmanuel Macron said that Rajoy had explained "the failure" of the Catalan separatist government's attempted referendum. The Spanish Prime Minister told his French counterpart that "the government's determination to halt the illegal referendum contributes to keeping the stability and democracy in the whole European Union."

Catalonia's government reports that 90 percent of voters backed independence in the referendum, in which 42 percent of those eligible cast ballots despite efforts to stop them. For the most part, those opposing independence did not see the ballot as legal and did not vote. Rajoy threatened to have Puigdemont arrested for allowing the referendum to proceed.

Backed by Spain's Constitutional Court, the government maintains that Sunday's ballot was invalid, which provided the grounds for Rajoy's ordering police to stop the referendum. Officers faced millions of defiant voters.

Puigdemont said he'd had no contact with Spain's central government and called on Prime Minister Mariano Rajoy to accept his proposal for EU-mediated talks about Catalonia's future.

"There must be the presence of a third party, which must be international to be efficient," he said.

The EU and the Catalonia crisis: Barbara Wesel from Brussels

However, while several European leaders expressed concern about the violence, none appeared to show any willingness to mediate political talks between the Catalan regional government and Madrid. Most EU governments, including those of France and Germany, said they backed Rajoy's constitutional reasoning for not recognizing Sunday's vote.

United Nations officials offered a more stinging criticism of the Spanish government's crackdown on the Catalan referendum, but stopped short of recognizing the legality of Sunday's vote.

UN rights chief Zeid Ra'ad al-Hussein called on Madrid to ensure that there would be "thorough, independent and impartial investigations" into Sunday's violence. Hussein said images of Sunday's assaults had left him "very disturbed" and that police efforts must "at all times be proportionate and necessary."

The president of the UN's 193-member General Assembly, Miroslav Lajcak, went even further, with his spokesman saying that "the right to self-determination is a basic right." However, Assembly spokesman Brenden Varma said self-determination "should be exercised in a way that is not in conflict with territorial integrity" and "should be sought in agreement with relevant partners."

Puigdemont also confirmed a pro-independence strike for Tuesday and said Rajoy had "no other option" but to apply the result of the referendum.

As he spoke to reporters, Catalans took to the streets of central Barcelona in droves to protest the police violence, shutting down traffic and shouting: "The streets will always be ours," a phrase that has become the slogan of the self-determination movement.