Spanish King Felipe VI said Tuesday evening that he was committed to the country's "unity and permanence" and strongly condemned Catalan leaders for holding a referendum on independence that he said undermined the rule of law.

In a rare televised speech to the nation, the 49-year-old king said the conduct of Catalan authorities was "irresponsible" and had undermined social cohesion in the Spanish region and challenged Spanish democratic institutions.

The king said the monarchy was dedicated to the Spanish constitution and that "it is the responsibility of the legitimate state powers to ensure constitutional order."

The speech did not directly mention the crackdown by Spanish police against polling stations during Sunday's referendum on Catalan independence, which was banned by the Constitutional Court.

Ninety percent of voters backed independence in the referendum with turnout just over 42 percent, according to Catalan authorities.

Puigdemont: Catalonia to declare independence within 'matter of days'

In an interview with the BBC on Tuesday, Puigdemont said Catalonia would declare independence "in a matter of days," implementing the directive of Sunday's banned referendum in defiance of Madrid.

Catalonia's regional president said his government would "act at the end of this week or the beginning of next." When pressed what he would do if the Spanish government intervened and seized control of the regional government, Puigdemont simply said it would be "an error which changes everything." 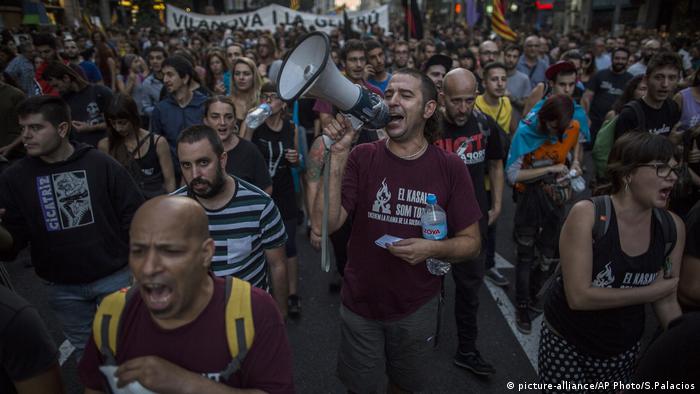 Pro-independence groups took to the streets before the king's speech to protest police violence.

Hundreds of thousands protest in Barcelona

Metro stations were closed and main roads blocked by pickets in the Catalan capital, Barcelona, on Tuesday after hundreds of thousands of people joined a strike to protest Spanish police's crackdown of Sunday's unauthorized referendum on Catalonia's secession from Spain.

City authorities estimated that 700,000 demonstrators took part in the protest that several labor unions and other pro-independence groups had called for after Sunday's clashes.

Authorities said 24 different protests were blocking several roads and motorways, with vehicles queuing for up to 10 kilometers (6.2 miles) in some cases.

Public transport services in Barcelona were sharply cut back, while the FC Barcelona football club suspended training in support of the strike. Several important tourist sites, including the Sagrada Familia basilica and the contemporary art museum, were also closed.

The strike forced SEAT, the German-owned car company, to stop production at one of its factories 40 kilometers (25 miles) from Barcelona. 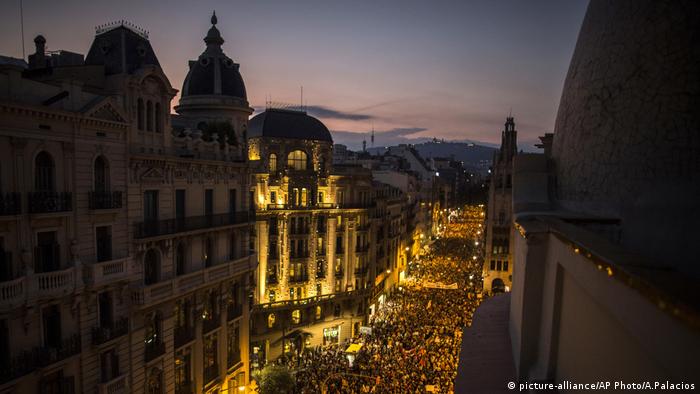 City authorities estimated that some 300,000 people took part in demonstrations throughout Barcelona on Tuesday.

Two of Spain's biggest unions, the UGT and CCOO, told their workers they could decide for themselves whether to join the strike to protest police violence. Both unions have spoken out against Catalan independence and have called for dialogue between the central government in Madrid and Catalonia to resolve the constitutional crisis.

Prime Minister Mariano Rajoy has defended the police actions, saying they were necessary to stop an unauthorized ballot.

"I've seen how President Puigdemont has flooded the streets with his followers to stop people obeying the law and to make them disrespect justice," she said. "We are here to defend the rights and liberties of all Spaniards that have been trampled upon by the regional government."

President Puigdemont has called on the European Union to mediate between Madrid and Barcelona.

The EU, which remained virtually silent on the Catalan issue for weeks, will hold a special debate on Wednesday on the matter.

Despite the referendum result, any unilateral declaration of independence is likely to be opposed not only by Madrid but also by many in the Catalan population, which is deeply divided on the issue.

If Catalonia were to secede, it would have severe economic repercussions for Spain, with the wealthy northeastern region accounting for a fifth of the country's GDP.

Catalan independence - what you need to know

Catalonia has gone to the polls on October 1 to vote in a referendum on independence from Spain. But do Catalans really want independence and are they ready? DW has the lowdown. (21.09.2017)