Canada sets its own course in the face of the Trump administration | Americas| North and South American news impacting on Europe | DW | 09.06.2017

Amid Washington's shifting role on the global stage, leaders in Ottawa are urging Canada to take a new foreign policy direction. Are the country's traditionally strong ties with the US being called into question? 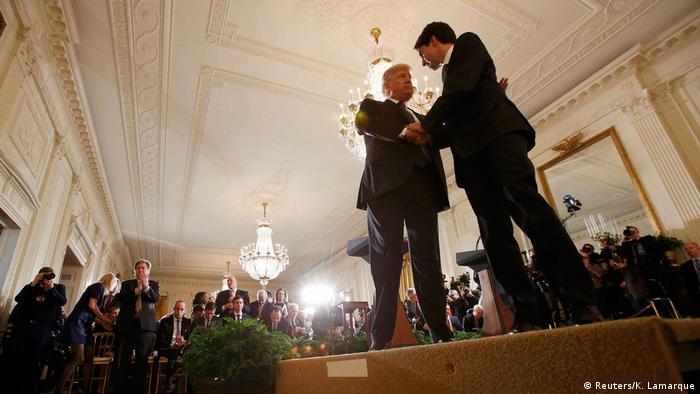 In a speech before the House of Commons, Chrystia Freeland, Canada's Minister of Foreign Affairs, took what many experts have described as Canada's boldest position in the face of the Trump administration to date.

Freeland stressed that "international relationships that had seemed immutable for 70 years are being called into question" in Europe, Asia and North America, and her speech was peppered with references to the US' shifting role in the world.

"The fact that our friend and ally has come to question the very worth of its mantle of global leadership, puts into sharper focus the need for the rest of us to set our own clear and sovereign course," Freeland said on June 6.

She also said Canada was "deeply disappointed" to see the US withdraw from the Paris Agreement on climate change. 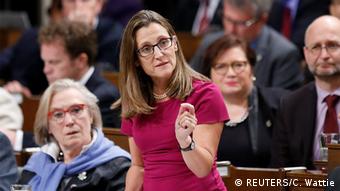 Freeland: It's time for Canada to set its 'own clear and sovereign course'

"The last thing the federal government wants to convey is that it's going to be in lock step with the Americans, particularly when they're acting in ways that certainly appear to be contrary to global interests," said Donald Abelson, chair of the political science department at the University of Western Ontario.

Abelson said he believed the minister "struck the right tone," and that her speech was as important for Canadians as it was for audiences in the US and abroad.

He explained that while Ottawa will continue to try to maintain good relations with the US, it "cannot be dragged down into this quagmire that is unfolding in Washington."

The speech "reassures world leaders that [Canada is] an independent, sovereign country that for the most part joins the consensus emerging in the global community," Abelson told DW.

Freeland also listed a series of distinct priorities for Canada, including the fight against climate change, multilateral institutions like NATO, an investment in the Canadian armed forces and international trade with other partners.

Last Wednesday, a day after Freeland's speech, Ottawa also announced it would sharply boost military spending by 70 percent over the next decade, up to 32.7 billion Canadian dollars (21.6 billion Euros, $24.3 billion).

The Canadian prime minister has also quietly called Canada's allies in Europe and Asia in the last week, according to The Canadian Press. But whether the dual foreign policy and military announcements were "a product of inevitability rather than a deliberate drawing of a line in the sand is an open question," opined Canadian political commentator Chantal Hebert in The Toronto Star.

Laura Dawson, director of the Canada Institute at the Wilson Center in Washington,said the timing of Freeland's speech was "really well considered," coming after "the Trudeau government gave as much time as possible to really listen to and internalize the positions" of the Trump administration.

"There's been a lot of patience while Canada has sort of waited to see what from President Trump's campaign rhetoric translates into reality," Dawson told DW.

Canada and the US are the world's largest trading partners, exchanging $700 billion worth of goods and services in 2015. "Canada has no closer friend, partner, and ally than the United States," Trudeau said in a statement after Trump was elected.

During his first visit to Trump at the White House, Trudeau also stressed that strong Canada-US ties were unshakable, and would help to bolster the middle class in both countries. 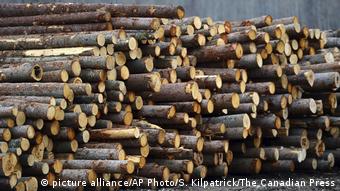 But Canadians have become increasingly anxious as the US administration pursues its "America First" policy.

The US president has threatened to scrap the North America Free Trade Agreement (NAFTA) entirely, and he also imposed duties on Canadian softwood lumber exports into the US, a move Canadian media described as "an attack" on the sizable industry.

Still, Dawson said Freeland's speech should not be seen as a shot against the US, or as overtly critical of the policies coming from south of the border.

"The message to me was: in areas that we can work together with the United States, we want to continue to do so, but in areas where we diverge, we are going to continue on these paths," she said.

Canada remains dependent on the US, and it must strike a balance between its own values and beliefs, "and the recognition that [it] cannot fully go it alone," Dawson said.

"One administration does not make a lasting schism in the relationship," Dawson said. "Canadians and Americans have weathered a lot of differences between their leaders, and continue to have a very strong partnership."

The Canadian province of Ontario plans to give up to 4,000 low-income households a guaranteed basic income for three years. Finland recently began its own basic income experiment, reports Jillian Kestler-D'Amours. (29.04.2017)

Canadian colleges are reaping the rewards of isolationism abroad and seeing booming numbers of foreign applicants. US and UK politics have caused many prospective students to turn to Canada, Kristina Jovanovski reports. (29.05.2017)