The US has ratcheted up pressure on Canada ahead of plans to renegotiate trade agreements. Trump's administration has introduced lumber tariffs and threatened to take action on protectionist dairy policies. 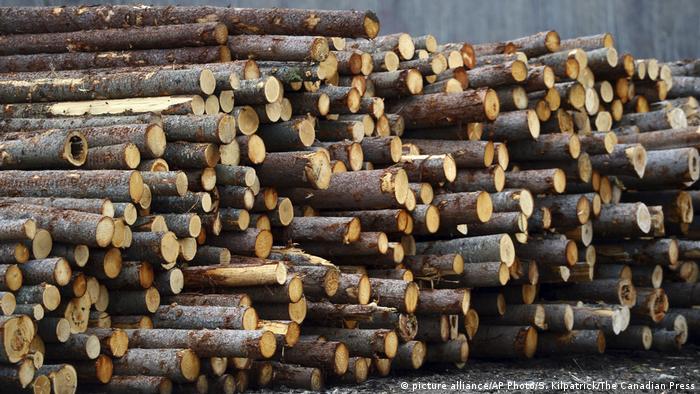 US President Donald Trump warned Canada on Tuesday that trade conditions needed to change as his administration imposed tariffs on imported Canadian lumber.

"People don't realize Canada's been very rough on the United States," Trump said at an agricultural forum. "Everyone thinks of Canada as being wonderful, and so do I. I love Canada. But they've outsmarted our politicians for many years."

He posted a similar warning on his Twitter account, complaining that Canada's tariffs on dairy products had made business tough for American farmers.

His Commerce Department has announced preliminary anti-subsidy tariffs averaging 20 percent on softwood lumber imports from Canada. The move would affect $5.66 billion (5.18 billion euros) worth of imports of the construction material, increasing construction costs in the US.

Canadian Prime Minister Justin Trudeau phoned Trump on Tuesday to reject "the baseless allegations" against Canada's industry and the "unfair decision," according to a statement from Trudeau's office.

"The prime minister stressed the government of Canada will vigorously defend the interests of the Canadian softwood lumber industry," said the statement, adding that both men agreed that a negotiated settlement was important.

Canada's Natural Resources Minister Jim Carr said Ottawa would fight back against the lumber tariffs through challenges at the World Trade Organization (WTO) or under the North American Free Trade Agreement (NAFTA). He said Canada would help companies and workers affected by the tariffs, noting that trade authorities had consistently sided with Ottawa in the longstanding dispute.

"The government of Canada disagrees strongly with the US Department of Commerce's decision to impose an unfair and punitive duty," Carr said in a statement. "The accusations are baseless and unfounded."

Most Canadian timber is harvested on public provincially-owned lands, unlike US timber, which is mostly harvested on privately-owned lands, leading to accusations of unfair advantages. In four previous softwood lumber disputes at NAFTA and the WTO, Ottawa successfully argued that the use of public land did not give Canadian producers an unfair advantage over their American counterparts.

Tariffs to increase US building costs

Carr warned the tariffs would increase costs for American families who want to build or renovate homes.

"The US National Association of Home Builders (NAHB) has calculated that a 1,000-dollar increase in the cost of a new house would put home ownership beyond the reach of more than 150,000 American families, and jeopardize thousands of jobs in the American home construction industry," Carr said.

In a statement, NAHB chairman Granger MacDonald said the tariffs would lead to a loss of $500 million in wages and salaries for US workers and $350 million in revenue for the government.

"Clearly, protectionist measures to prop up domestic lumber producers at the expense of millions of US homebuyers and lumber users is not the way to resolve the US-Canada trade dispute or boost the US economy," he said.

Softwood imports have been a point of contention between the two countries for decades. The tariffs were imposed after a previous agreement expired in 2015.

A federal judge in San Francisco has said Trump's executive order to withhold federal funds from so-called sanctuary cities was too broad. Mayors had expressed concerns about the order's effect on their yearly budgets. (26.04.2017)

Germany's economy minister has voiced concern at new White House orders to study US trade deficits. Berlin is closely watching developments on trade policy in the US, one of Germany's biggest trading partners. (02.04.2017)

Canadian leader Justin Trudeau has distanced himself from anti-Brussels sentiment in the US and UK. In a speech hailing the CETA free trade deal, he said the world benefits from a strong European Union. (16.02.2017)

NAFTA up for renegotiation

Trump's trade rhetoric came just months after a warm meeting between Trump and Trudeau in Washington, where Trump said the US-Canada trade relationship only needed "tweaking."

US Commerce Secretary Wilbur Ross on Tuesday said no immediate further actions against Canada were being contemplated, but added that there was a need to renegotiate NAFTA soon.

"If NAFTA were functioning properly, you wouldn't be having these kinds of very prickly, very unfortunate developments back to back. So, in that sense, it shows that NAFTA has not worked as well as it should," Ross said.

But a business body representing several big North American multinationals countered that the US government did not have a clear idea of what NAFTA covered.

"It is important to understand that neither dairy nor lumber are covered by the NAFTA," the CEO of the Washington-based Canadian American Business Council, Maryscott Greenwood, said in a statement.

"The fact that these two protected sectors are the subject of bilateral disputes in recent weeks is not evidence that NAFTA is failing," she said.

The US, Canada and Mexico are preparing to renegotiate the 23-year-old agreement, with Trump vowing to better protect American workers.

Last year, the US sold $267 billion of goods to Canada, its largest export market, while Canada sold $278 billion in goods to the US.