A federal judge in San Francisco has said Trump's executive order to withhold federal funds from so-called sanctuary cities was too broad. Mayors had expressed concerns about the order's effect on their yearly budgets. 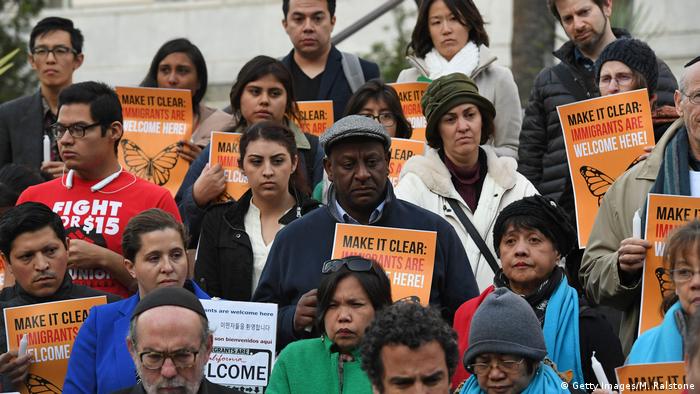 A federal judge in San Francisco on Tuesday blocked US President Donald Trump's executive order to cut federal funding to cities that do not cooperate with US immigration authorities.

US District Judge William Orrick made the decision on two lawsuits against the executive order brought forward by two California communities: Santa Clara County and the city of San Francisco.

US 'sanctuary cities' to protect against possible Trump deportations

With President-elect Donald Trump threatening aggressive action against illegal migrants, liberal mayors are reassuring their immigrant populations that they’re safe. But that task may prove difficult. (17.11.2016)

Chad Readler, an attorney with the Justice Department, defended the executive order saying the president had to use his "bully pulpit" to "encourage communities and states to comply with the law."

"They've come up with a further interpretation," said Keker. "It won't wash."

Similar lawsuits have been filed in Seattle, two cities in Massachusetts and another city in the San Francisco Bay area, the city of Richmond. The lawsuits by Santa Clara County and San Francisco were the first to be heard before a judge.

Trump signed the executive order in January to go along with pushing a campaign promise to build a wall along the US-Mexico border to stem illegal immigration.

Communities and cities that have laws that prevent sharing information between local police and US immigration authorities are known as "sanctuary cities."

San Francisco is one of more than 400 sanctuary cities in the US, along with New York, Chicago and Los Angeles. Opponents of policies in "sanctuary cities" say the laws make it difficult to remove potentially dangerous criminals from the US.

US mayors unsure of executive order

Mayors from cities across the US met with US Attorney General Jeff Sessions on Tuesday to discuss the blocked executive order.

"We want all jurisdictions to enthusiastically support the laws of the United States that require the removal of criminal aliens, as many jurisdictions already do," Sessions said in a statement after meeting with members of the US Conference of Mayors.

However, certain representatives of the US Conference of Mayors are still confused about what the executive order entails, and how much information local police must provide to which federal authority.

"We got more clarity than we've ever received, but we also have other thorny issues to sort through," said Jorge Elorza, the mayor of Providence, Rhode Island.

Elorza continued by saying he has received different messages from federal authorities on immigration, and demanded clarity.

"We hear very different messages from [Homeland Security], [the Department of Justice] and also the White House. Just give us clarity and please have one, clear policy so we can know where we stand," said Elorza.

Trump bans refugees from US