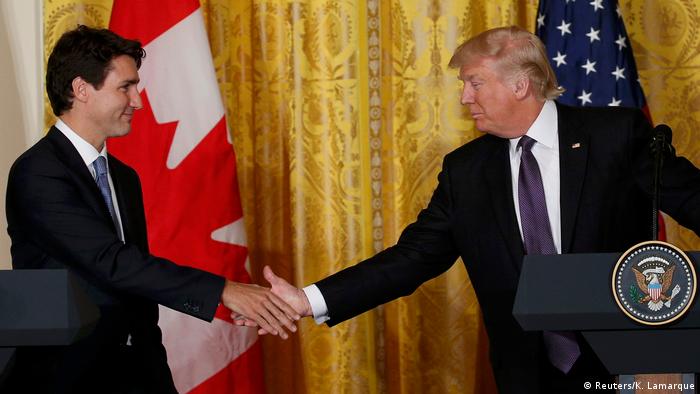 Canadian Prime Minister Justin Trudeau traveled to the White House Monday where he shook hands with US President Donald Trump for the first time since Trump's inauguration.

Trudeau is the third foreign leader to meet with Trump, following British Prime Minister Theresa May and Japanese Prime Minister Shinzo Abe. The two leaders were scheduled to talk about free trade between the neighboring countries and beyond, as well as a roundtable discussion about women in the workplace. Before the trip, Trudeau said he expected to "find a lot of common ground" with Trump.

The two countries are incredibly important to one another in trade. More than 75 percent of Canada's exports goes to its sole neighbor as 18 percent of US exports go to Canada. Canadians are concerned about what Trump may do to the North American Free Trade Agreement (NAFTA), an agreement Trump has vowed to renegotiate. 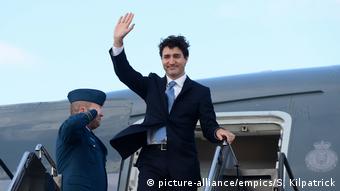 NAFTA, which went into effect in 1994, is a trilateral trade agreement between the US, Canada and Mexico. It eliminated most tariffs between the three countries, as well as other trade barriers. Trudeau is a strong supporter of free trade and supports NAFTA, while Trump called the agreement a "catastrophe" and has considered placing tariffs on products imported from Mexico. The two leaders stressed the importance of their relationship during a joint press conference after their talk.

"America is deeply fortunate to have a neighbor like Canada," said Trump, but added he will "be tweaking" the trade relationship with his northern neighbor.

Trudeau said the US and Canada "will always remain each other's essential partner."

Trudeau has welcomed tens of thousands of migrants into Canada since assuming office in November 2015. Trump erected a temporary travel ban on seven Muslim-majority countries soon after taking office, which caused protests across the US. Trudeau responded to the ban by tweeting a message that welcomed migrants to Canada.

The two leaders were not expected to talk much about allowing migration into their respective countries, but Trudeau said there was a "strong and fruitful discussion" on the subject. Trudeau said Canada would continue to allow migrants into the country following the talk with Trump.

"We continue to pursue our policies of openess towards refugees without compromising security," said Trudeau.

Trump defended his decision to put the travel ban in place, saying, "we cannot let the wrong people in."

Trudeau's cooperation with Trump may ease worries in Canada that Trump may be combative with Canada and put protectionist policies in place. Trump recently had a heated conversation with Australian Prime Minister Malcolm Turnbull and has a rocky relationship with Mexico after promising Mexico will pay to build a wall along the 1,933 mile (3,111 kilometer) border the US shares with Mexico in his campaign.

Trudeau and Trump also attended a roundtable to spearhead a task force for working women. They announced the United States Canada Council for the Advancement of Women Business Leaders-Female Entrepreneurs following a meeting with women executives from the US and Canada.

Ivanka Trump, daughter of US President Trump, has been a strong advocate for more benefits for working women and was involved in bringing women executives from the US and Canada to Monday's roundtable.

"The full power of women can do better than anybody else," said Trump.