Journalists in Hong Kong are worried that new legal measures in the city would limit the scope of independent reporting as authorities vow to "vigorously implement" Beijing's new security law. William Yang reports. 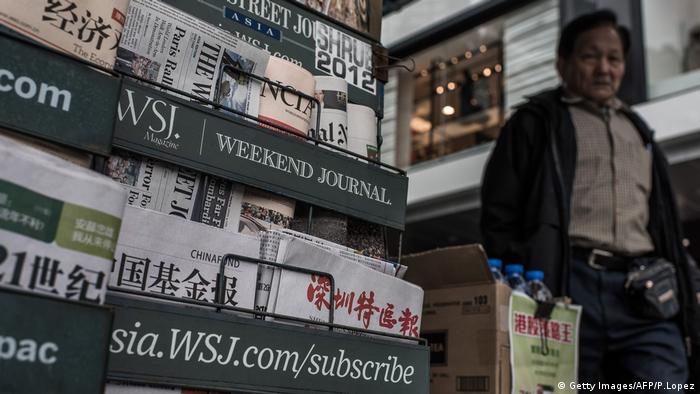 Just days after Beijing passed the contentious national security law for Hong Kong, activists say there are already signs that freedom of expression in the city is under threat.

Hong Kong authorities said last Thursday that chanting the "Liberate Hong Kong, the revolution of our times" slogan is tantamount to the subversion of state power. The following day, the government filed terrorism charges against a 23-year-old biker who used a now-banned slogan.

The government of the semi-autonomous Chinese territory said Tuesday it will "vigorously implement" the controversial security law. The new legislation targets what authorities in mainland China define as secession, subversion, terrorism and collusion with foreign forces. Those violating the law could face up to life in prison.

"I forewarn those radicals not to attempt to violate this law, or cross the red line, because the consequences of breaching this law are very serious," Hong Kong Chief Executive Carrie Lam told a press conference Tuesday.

The new law has drawn international condemnation for jeopardizing Hong Kong's civil liberties enshrined under the "one country, two systems" framework, including the freedom of speech and assembly.

Chris Yeung, chairman of the Hong Kong Journalists Association, told DW that the national security law poses a direct threat to journalists and media organizations because any pro-democracy report could be deemed a criminal offense.

Eric Cheung, a lecturer at the University of Hong Kong's Faculty of Law, told DW that Article 38 of the law allows Beijing and Hong Kong authorities to monitor the conduct of Hong Kong's expat community as well.

"The national security law has a wide-ranging extra-territorial impact, which goes beyond what the Chinese system normally allows," Cheung said.

According to Article 29 of the law, individuals working with foreign organizations will be penalized if they "provoke hatred among Hong Kong people towards the local or central governments."

A local journalist told DW on condition of anonymity that Article 29 does not clearly define what constitutes "provoking hatred towards the governments."

Anyone who "steals, spies and unlawfully provides state secrets or intelligence concerning national security to foreign countries or institutions" could also be prosecuted under the same article of the law.

"'State secrets' and 'intelligence' are broad terms, which have been used against journalists working in China,” the journalist said. "The national security law, which is more draconian than the mainland law, has made it very difficult for people to speak anything freely about politics."

Yeung, however, believes the media freedom situation in Hong Kong is still better than in the mainland.

But Kai Ong, a researcher at Amnesty International, told DW that Hong Kong journalists are concerned that the city government may replicate the Chinese model of restricting journalistic activities and force journalists to get accredited in order to report and gather information in the city.

Some journalists believe it is now crucial to learn from journalistic practices on the mainland.

"We need to examine what is happening in mainland China to get an idea of what may happen in Hong Kong. That's how Hong Kong's journalists can manage to do something meaningful in an increasingly tough environment," Yeung said.

Others are less optimistic about the future of journalism in Hong Kong. "I think it will only get worse regardless of what we do," a journalist told DW. "However, I won't give up journalism because I love Hong Kong. How can China criminalize someone's love for their city?"