Can China broker peace between Russia and Ukraine?

While Western leaders hope China will play a more active role in mediating between Russia and Ukraine, experts say it's unlikely that Beijing will jeopardize its warming ties with Moscow. 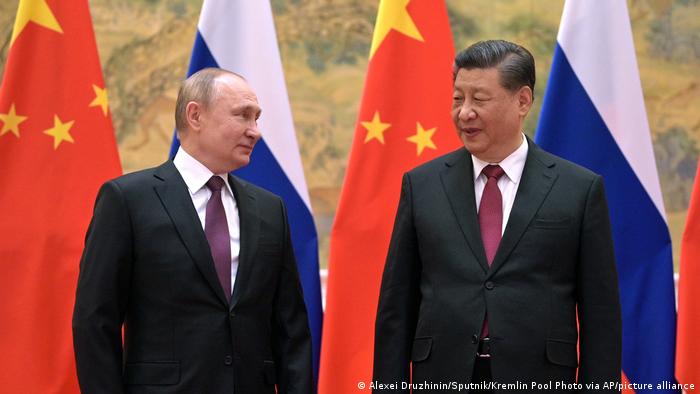 As the war in Ukraine continues, the international community is desperately trying to find a way to facilitate peace talks between Russia and Ukraine. The two sides have held three rounds of talks so far, but no long-term results have come out of these negotiations.

Many countries have repeatedly looked to China to help facilitate more meaningful negotiations between Moscow and Kyiv, but Beijing hasn't offered any clear signal about whether it is willing to get more involved in the unfolding crisis in Ukraine or not.

In an interview with Spanish newspaper El Mundo recently, the European Union's foreign policy chief Josep Borrell said he was in favor of China mediating the peace talks. "There is no alternative," he said. "We can't be the mediators, that is clear… And it cannot be the US either. Who else? It has to be China."

Then last week, Chinese Foreign Minister Wang Yi called on both sides to settle disputes by peaceful means, through dialogue and negotiation, and "respect and protect the sovereignty and territorial integrity of all countries." He also described Russia as China's "most important strategic partner" while refusing to condemn Moscow's invasion of Ukraine despite growing international pressure.

"No matter how perilous the international landscape, we will maintain our strategic focus and promote the development of a comprehensive China-Russia partnership in the new era," Wang said during a press conference on the sidelines of the annual meeting of China's rubber-stamp parliament.

Will China volunteer to be the mediator?

Chinese President Xi Jinping also expressed concerns about the war in Ukraine and said the priority should be preventing the conflict from "spinning out of control." The comments came following Xi's virtual meeting with French President Emmanuel Macron and German Chancellor Olaf Scholz last week.

A German government spokesperson said that Chancellor Scholz, French President Macron, and Chinese President Xi agreed to fully support all efforts aimed at seeking a diplomatic solution to the war.

Danil Bochkov, an expert at the Russian International Affairs Council in Moscow, said it is unlikely that China will agree to voluntarily play the role of mediator between Ukraine and Russia as it could put Beijing at the center of international scrutiny.

"I don't think China is willing to throw itself into the confrontation by acting as a mediator, which unavoidably will place it on the front stage of this crisis with all the parties scrutinizing its very step," he told DW.

Andrew Small, a senior fellow at the German Marshall Fund, pointed out that China seems unwilling to take any steps beyond expressing the desire for peace, as it wants to avoid directly interfering with what Russia wants to do. "I think the sense is still they would give Russia the space to do what it wants," he said.

According to Small, in cases where China had been willing to take on the role of mediator, it is often dealing with "little brother" type of countries like North Korea and Pakistan, where it is able to call the shots and where it felt comfortable leaning on those countries a little bit. "China is not comfortable leaning on Russia, and I think they would question whether it would be successful," he told DW.

Close ties between China and Russia

In recent months, China and Russia have been building closer ties.

Following the in-person meeting between Russian President Vladimir Putin and Chinese President Xi last month, both leaders vowed that the two countries' friendship had "no limits."

Some analysts point to the Chinese foreign minister's affirmation of the bilateral ties between China and Russia and the joint statement issued last month as signs that Beijing won't be willing to jeopardize its relationship with Moscow, despite the difficult situation that Russia is facing.

"Taking into account Putin's strong militant will, desperate need to realize his 'minimum war aims,' and China's dependence on a strategic and military partnership with him in general, one can seriously doubt that Beijing is able or willing to play a role of substantial restraint on Putin," said Shi Yinhong, a professor of international relations at Renmin University in Beijing.

Others think maintaining close ties with Russia can be useful for China in a number of ways.

Sari Arho Havrén, a European-China Policy Fellow at the Berlin-based Mercator Institute for China Studies (MERICS), said that the partnership can help advance China's geopolitical goals while shaping the global order. Additionally, the deteriorating economic situation in Russia could open up potential investment opportunities for Beijing.

"It could open up new opportunities for China to invest in strategic areas in Russia," she told DW. "These opportunities could [potentially] secure China's energy and raw material needs in the future while reducing its dependency on the West as well as strengthening its self-sufficiency at home."

While world leaders continue to urge China to play a more active role in facilitating the peace process in Ukraine, their hopes are "misplaced," said Didi Kirsten Tatlow, a senior fellow at the German Council on Foreign Relations.

"I think the hope that Xi Jinping can be a neutral and effective mediator is quite misplaced," she stressed.

"Even if Beijing were to help mediate in the short term, essentially it's going to be like inviting someone in to give them control and position over an issue that's incredibly important to democratic countries. I think democratic countries are putting themselves in a very weak position here," she added.

Russia expert Bochkov stressed that what Russia is doing now falls within the goals unveiled in the joint statement released in February, which is to change the US-dominated world order.

"Since Russia and China agree that the current Ukraine crisis is provoked by the US and NATO, there is no inconsistency in China's tacit backing of Russia," he said.

While some hope Chinese President Xi could use his influence to push Putin at the negotiating table, Bochkov believes no one in the world can have a hold on Putin.

"He started all this, and he is resolute to push it to the very end," the expert said. "It's not a question of who could influence him, but a matter of when he decides that goals he had originally set are achieved."

Meanwhile, US media, citing unnamed officials, reported on Sunday that Russia had asked China for military and economic aid for its war in Ukraine. The officials did not specify what kind of equipment Moscow had requested, or whether Beijing had responded, according to the reports.

Beijing refused to directly address the reports, instead accusing Washington of maliciously spreading "disinformation" over China's role in the Ukraine war.

A spokesperson for the Chinese embassy in Washington told multiple outlets "I've never heard of that" when asked about the alleged requests.

This is an updated version of a previous article published on March 10.