Four decades ago, Israeli and Egyptian leaders managed to end years of hostilities with the help of a US president. Their experiences with the horrors of violence led them to find peace in a broken region. 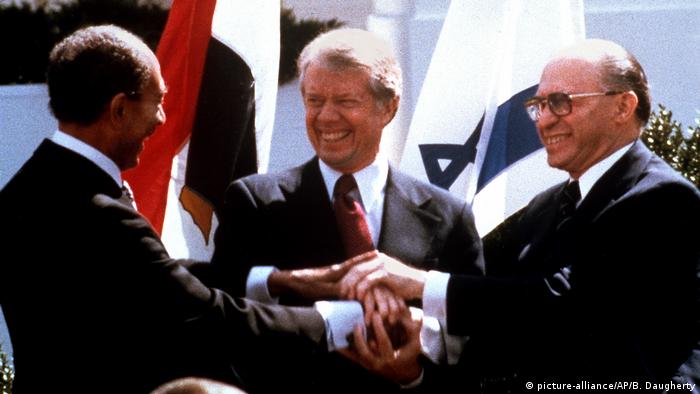 In September 1978, Israel and Egypt, with help from US President Jimmy Carter, signed a peace accord at Camp David. The agreement was unpopular but it was dictated by political reason.

Although the river was neither large nor rapid, it was meaningful in the eyes of the later US president — exceedingly meaningful. For Jordan was the river upon whose banks so many stories from the Bible played out. And it was in this river that Carter — then governor of the state of Georgia — and his wife Rosalynn were permitted to swim when they visited Israel and the West Bank in 1973. The swim required special permission from the government of Israel, which seized the West Bank in 1967.

That swim in the river Jordan and his trip to the Holy Land were the root of Carter's fascination with the Middle East and his resulting desire to contribute to bringing peace to the region. When the deeply religious Christian became president in 1977, he immediately set out to make that vision a reality.

"He had come to believe that God wanted him to bring peace, and that somehow he would find a way to do so," as Lawrence Wright notes in his book "Thirteen Days in September," which chronicles the two weeks in September 1978 that eventually led to what had been considered a seemingly impossible breakthrough: Mediated by the US president, Egyptian President Anwar Sadat and Israeli Prime Minister Menachem Begin negotiated a peace agreement between their countries. The deal, later known as the Camp David Accords, was officially signed in March 1979, just months after the historic meeting. 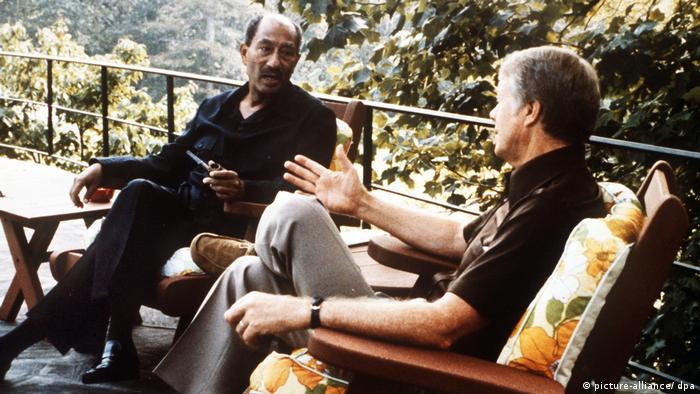 US President Jimmy Carter mediated the talks, shuttling back and forth between both sides to discuss crucial points

Both Sadat and Begin had experienced violent occupation early in life. In 1918, when Sadat was born, Egypt was under British control. Sadat was particularly fond of recounting an event that took place before he was born. In 1906, a British hunting party arrived in the village of Denshawai on the Nile Delta. There was a clash between the Britons and the villagers and a British officer was killed. The British then sent in a military expedition and 52 villagers were arrested. Most were whipped or thrown in jail; four died on the gallows.

Menachem Begin was more directly exposed to the brutal violence of an occupying force. Born in 1913, Begin's hometown of Brest, which is in Belarus today, was occupied by the German Army in 1941. The Germans immediately rounded up all of the city's Jews in order to deport them to death camps. Begin's mother Hassia was in the hospital at the time. The Nazis murdered her in her bed. His father Zeev Dov was killed when soldiers weighed him down with rocks and drowned him in the Bug River.

Those firsthand experiences of helplessness drove both men to fight for the protection of their respective countrymen – Sadat in Egypt and Begin in Israel. Both men saw the Middle East conflict that began with Israel's declaration of independence in 1948 as a zero-sum game: One country's gain meant the other's loss – with every territorial gain made by Israel diminishing the territory of the Arabs and vice versa.

To the ends of the earth

And that, by and large, was also how their predecessors saw the situation. Step by step, the rivalry that began in 1948 grew into open hostility. Before the Camp David summit both countries had fought no less than four wars: The Arab-Israeli War of 1948-49, which resulted in the foundation of the state of Israel; the Suez crisis of 1956, the Six-Day War of 1967, and finally, the so-called Yom Kippur War of 1973. It was a violent cycle that Carter was determined to break.

There had been rapprochement prior to Camp David. On November 9, 1977, Sadat told the Egyptian parliament that he would go to the ends of the earth, even the Israeli Knesset, if it would mean saving the life of one Egyptian soldier. When Begin invited him, Sadat took up the offer: On November 20, he addressed the Knesset — enraging much of the Arab world. Syria, Iraq, Libya and Algeria all broke diplomatic ties with Egypt. The Palestinian Liberation Organization (PLO) criticized Sadat's move as well.

Coming together under outside pressure

Despite the criticism, less than one year later Sadat and Begin met at Camp David. Both were cognizant of the fact that another issue was at stake beside peace: Good relations with the US. Both men went into the meeting determined to take a hard stand, yet they also knew that inflexibility could do longterm damage to their relations with Washington.

The realization that the zero-sum logic no longer applied and that the men would have to take not only Middle East but also US sensitivities into account — and that the two were closely related — finally forced the issue, with Begin and Sadat eventually striking a deal. The Camp David Accords obliged both countries to acknowledge one another as sovereign states. It also ended the state of war that began in 1948. Israel also agreed to return the last remaining sections of the Sinai Peninsula under its control to Egypt.

Other principles were also established: The rights of Palestinians displaced by Israeli settlements set up in the occupied territories were to be acknowledged. In return, Israeli ships would be granted unimpeded passage through the Suez canal, and the Straits of Tiran and the Gulf of Aqaba would be acknowledged as international waters, providing freedom of passage for Israeli vessels.

The fate of the nation

"Two great leaders — great for the history of their nations —President Anwar Sadat and Prime Minister Menachem Begin have shown more courage, tenacity and inspiration than any general leading man and machine on the battlefield," said Carter, hailing the outcome of the summit. Still, Sadat and Begin had difficulty getting approval for the accord at home despite the fact the two were awarded the Nobel Peace Prize in 1978. "The fate of the nation hangs in the balance," grumbled Begin when Carter visited Israel in March 1979. Many Egyptians saw things the same way — especially Islamic extremists. Anwar Sadat was later assassinated by Islamists during a military parade in October 1981.

The legacy of Camp David continues to be held high today, though less enthusiastically. Both sides know they cannot afford another war, as the consequences for each would be detrimental. In the end, a sober peace is a dictate of reason.