One of the world's richest inland fishing grounds, Tonle Sap lake nourishes tens of millions of people. But climate change and dam construction are threatening livelihoods at the lake, as well as regional food security. 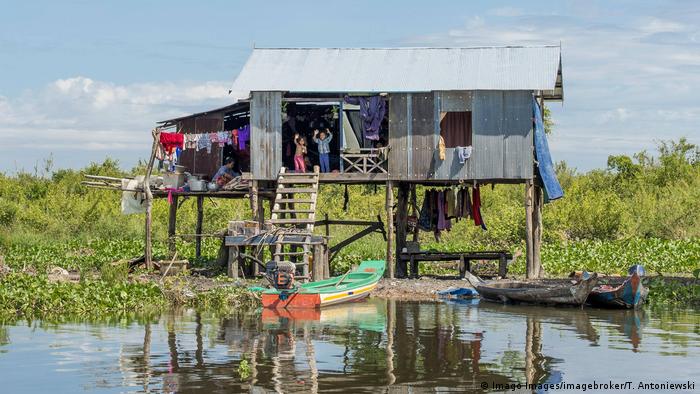 Water levels in Cambodia's Tonle Sap hit historic lows for the third year in a row at the end of August, according to the Mekong Dam Monitor, a cooperative effort by the Washington-based Stimson Center and Eyes on Earth.

Though levels have started to creep up in the past week, they remain far below what they should be at this time of the year. Tonle Sap — Southeast Asia's largest fresh water lake — ought to be full of water and fish.

"To make things worse, data shows upstream dams are restricting as much water as they would hold back during a normal wet season," Eyler said.

"Regardless of how much rain falls during the wet season, upstream dam restrictions are devastating for the Mekong's ecological processes and the natural resources that come from the river upon which tens of millions rely," he added.

Since early July, over 12 billion cubic meters (420 billion cubic feet) of water have been withheld by 45 upstream dams, according to the Mekong Dam Monitor.

Every year during the June-October monsoon season, the Mekong river floods and reverses the flow of the Tonle Sap, replenishing the lake and drawing bountiful fish stocks into the lake system.

But lately this natural cycle has been delayed, hampering local farming and destroying fisheries.

"The recurring pattern of record lows in the Tonle Sap and parts of the Mekong basin over the past few years shows that Mekong is in crisis," Pianporn Deetes, campaigns director at International Rivers, a conservation NGO, told DW.

"Climate change and large-scale dams are disrupting the timing and size of floods during the wet seasons, which are critical to sustaining the health of the Tonle Sap and the Mekong basin and the lives and livelihoods of millions of people," she added.

Marc Goichot, WWF's lead for freshwater in the Asia-Pacific region, attributes the cause of record-low water levels to several factors, including changes of land use and changes in rainfall patterns brought about by the climate crisis. He also said the riverbed of the Mekong is losing elevation due to the combined effect of reservoirs behind dams trapping sediment and sand mining.

Experts are concerned about the critical situation of an ecosystem vital to the lower Mekong river basin.

"The Mekong's flood pulse brings water that inundates the huge floodplain making it a 'wetland bouillabaisse,'" he said. "It is all about the flood pulse. Change it and everything else changes."

According to Eyler, the annual flood pulse is needed to keep Tonle Sap functioning as the world's largest inland fishery and to keep it providing nourishment to Cambodians, who derive up to 70% of their animal protein intake from the lake.

Without the wet season's high water levels, the lake's fish population drastically decreases and so does the annual catch.

"Many of those fish leave the lake at various times of the year to migrate to other parts of the Mekong in Thailand, Laos and Vietnam, so a weak Tonle Sap is bad for regional food security outcomes," Eyler said.

"Large-scale dams on the Upper Mekong in China and key tributaries in the Lower Mekong are a main cause of the damage," Deetes said.

"They withhold much-needed water during the wet season, reduce the flow of vital sediments and nutrients, and are cutting and isolating the Mekong into multiple pieces, which is having major detrimental impacts on the health of the Mekong and Tonle Sap," she added.

Susanne Schmeier, an associate professor of Water Law and Diplomacy at IHE Delft, said that, though the dams have contributed to the problem, their limited storage capacity — and the fact that less than a fifth of the water in the Mekong lower basin comes from China — means that Tonle Sap's low water levels cannot "exclusively" be blamed on Chinese dams.

Though Beijing has pledged to share more water data, river campaigners are demanding more action to address the crisis, both from China and downstream countries, which have also been accused of taking insufficient action.

"We see that there are agreements and promises from China to share information, but this is insufficient," Deetes said.

"Someone telling us they're turning on or off the tap is not helpful. The Mekong and its people need natural and ecological flow in order to sustain the natural services," she added.