Bundeswehr joins police for anti-terror exercises | Germany| News and in-depth reporting from Berlin and beyond | DW | 07.03.2017

Germany has launched three days of anti-terror exercises across the country involving both the police and the Bundeswehr. Opposition parties have warned of a "militarization of society." 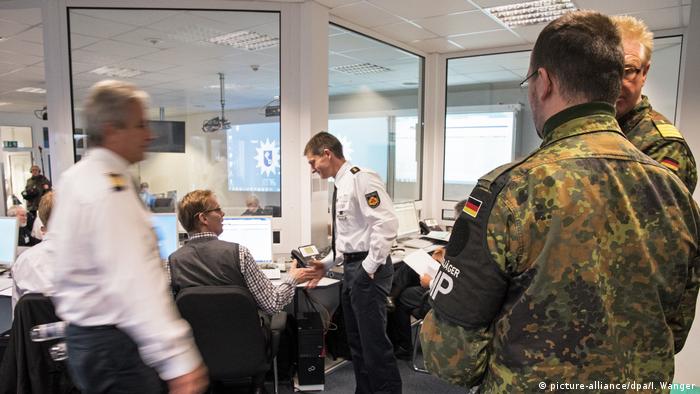 The Bundeswehr has joined Germany's police forces to conduct three days of exercises to prepare for the event of multiple simultaneousterror attacks across the country.

Short for Gemeinsame Terrorismusabwehr-Exercise (Joint Terrorism-Defense Exercise), the GETEX mission is the first of its kind in Germany and will involve operations in six states: Baden-Württemberg, Bavaria, Bremen, North Rhine-Westphalia, Saarland and Schleswig-Holstein.

Both state and federal police forces will be involved in the exercises, plus some 360 soldiers, though authorities were at pains to point out that people would not be seeing tanks and troops on the streets. The exercise mainly involves "practicing communication paths" for the control centers coordinating the operation, the Interior Ministry announced in a statement.

"Germany is in the target spectrum of international terrorism - we were recently forced to experience that in a horrible way before Christmas in Berlin," the statement read. "An early and intensive preparation by the security forces is essential."

The government's reassuring tones are in part to assuage Germans' suspicions about allowing the army to operate inside the country's borders: The military had been used as an arm of law enforcement both in the Weimar Republic and under the Nazi regime that succeeded it. 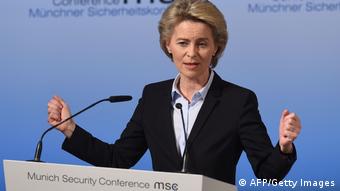 Though the constitution does not explicitly forbid domestic military operations, it does set rules about how they can be used. The Basic Law allows states to call for military help "in order to respond to a grave accident or a natural disaster."

In fact, the Bundeswehr has been deployed inside Germany before - most notably during the flooding of Hamburg in 1962 and during the recent "refugee crisis," when soldiers helped shelter, transport and register refugees after local bureaucracies became overstretched.

But the army has never been used to deal with a terrorist incident, and there has been some legal debate in Germany over whether the constitution's phrase "grave accident" covers such an attack. It took a 2012 Constitutional Court ruling to declare that military intervention is allowed in "exceptional situations of catastrophic proportions."

The government duly made sure to claim that its legal bases are covered for the exercises. "The Bundeswehr will only support the police if it has been asked - if the police cannot get any further by their own means," Defense Minister Ursula von der Leyen told the DPA news agency. "It's important for us to learn what procedures, processes and chains of command work in a stress test, and where the weak points are."

But Ulla Jelpke, of the socialist Left party, objected to the government's definition. "This exercise is not a contribution to internal security, but a nail in its coffin," she said in a statement. "The scenario is deliberately designed extremely unrealistically so that it will at least stick to the letter of the Basic Law and the decisions of the Constitutional Court. But it does not conform to the content. Even if this is just a desk exercise, this exercise contributes to the militarization of society." 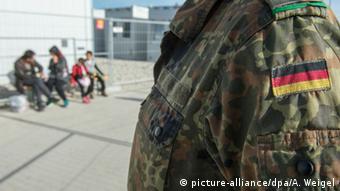 Soldiers helped during the refugee "crisis," when bureaucracies were stretched

Despite Jelpke's condemnation, there's no doubt the military has resources that the police could use in the event of a terrorist attack. "There is increasing demand for specialized capabilities the Bundeswehr has to offer: Finding and disposing of explosive devices, specialized medical treatment of victims, fast and armored transport of forces, or indeed evacuation of victims, among many others," Sebastian Schulte, the Germany correspondent for the military magazine "Jane's Defence Weekly," told DW. "The current exercise is designed to bring these specialized capabilities to bear when needed - however, under the command of the respective police force."

This point was behind von der Leyen's argument: "No one would understand if the Bundeswehr's resources were not put into the service of the population in the event of an extreme terrorist attack," she said.

But these assurances weren't enough for either of Germany's main opposition parties. The Greens' domestic policy spokeswoman, Irene Mihalic, said the exercises showed a "lack of trust" in the police and suggested that the Bavarian police's reaction to a shooting spree in Munich last summer showed how capable it was of dealing with such situations.

Mihalic also suggested that the government had not clearly defined the role that the military would play. "Not even the Interior Ministry can meaningfully describe in what situations the police would be dependent on the help of the Bundeswehr," she told the "Rheinische Post" newspaper.

But Schulte said state police would certainly be grateful for military help in an emergency. "It is consensus in Germany's security community that it would be a serious challenge for the country's various police forces to maintain security and stability during a terror incident involving multiple attacks and perpetrators across the country," he said.

Following multiple terror strikes across Germany, Bavarian authorities plan to boost the police force and use the army to help secure borders. Soldiers, however, warn that the Bundeswehr is no "auxiliary police." (27.07.2016)