Cologne have been relegated from the Bundesliga for the sixth time in their history after a 3-2 defeat away at SC Freiburg. Elsewhere, Hamburg beat Wolfsburg to move them within two points of a miraculous escape.

Cologne needed a win on Saturday to preserve even a slim chance of survival, and could not secure it — despite a late flurry of false hope for the Billy Goats' fans. Striker Lucas Höle drove the final nail into the Billy Goats' coffin after a frenetic close to the game. Claudio Pizarro had had the winning goal on the tip of his boot moments before Freiburg restored their lead. Three points provides breathing space for Freiburg in their battle to avoid 16th place and the relegation playoff. 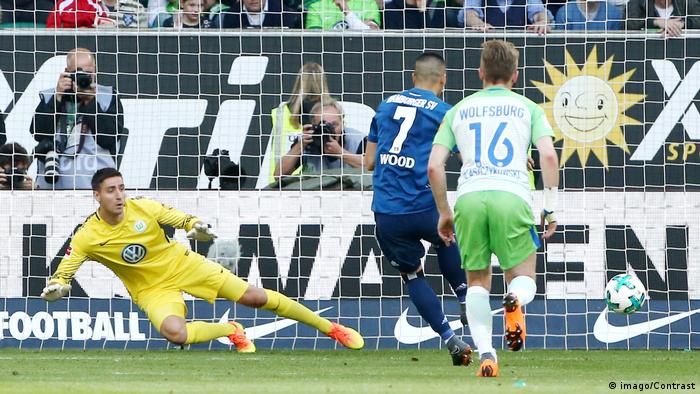 Hamburg live to fight another day. A flurry of activity before the break sealed three points in Wolfsburg against one of the teams now looking over their shoulders at the bottom two places. The win pulls HSV within two points of Wolfsburg in 15th place.

Yoshinori Muto drew a penalty in the 27th minute while trying to turn with at the top of the penalty area, and Pablo De Blasis converted the spot kick — the Argentinians third goal in his last three games. Substitute Alexandru Maxim and Bundesliga debutant sealed the victory with strikes in the last five minutes.

Leipzig, who are vying for a spot in next season's Champions League, managed just six shots in the contest. They are now without a win in their last four league matches and will be without Naby Keita next week after the midfielder was sent off with a second yellow in second half stoppage time.

Mainz's victory leapfrogged them over Wolfsburg into 15th place and outside of the relegation zone.

Gentner's headed goal was enough for visiting Stuttgart as Bayer Leverkusen's uncontrolled implosion continues unabated. A contender in the fight for second for much of the season, Leverkusen have now lost three on the bounce and won just two of their last seven. Hoffenheim replace them in the Champions League positions as a result of this defeat in the Saturday evening game. Solidly in mid-table, Stuttgart could even dare to dream of a Europa League spot, if the last two Bundesliga weekends go their way.

Frankfurt hadn't scored a goal in Munich in more than seven years, but lifting this curse ultimately proved scant consolation. Bayern, meanwhile, focused on their Champions League return leg against Real Madrid, rested as many senior players as possible. Youngsters Lars Lukas Mai, Niklas Dorsch, Meritan Shabani and Franck Evina all started for Bayern — all bar Mai were making their professional debuts. Dorsch even capped his with a goal.

Hertha's late comeback means nothing was decided in the battle for ninth in the Bundesliga.  In fact, the draw opens the door for Stuttgart, if they can score points in the tough evening game against Bayer Leverkusen. Davie Selke won the penalty for Ibisevic (with the help of some jostling and theatrics of his own) before going on to score the equalizer. 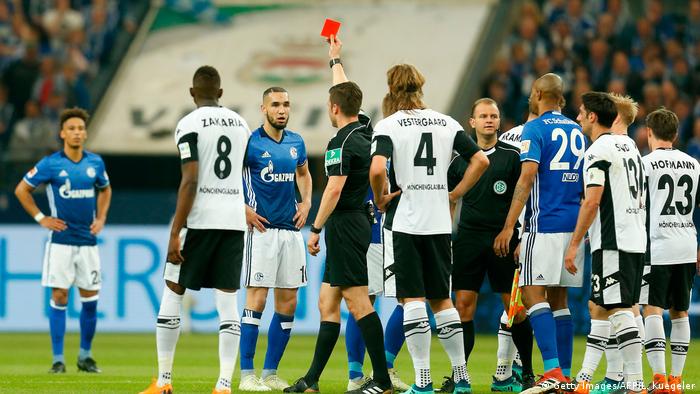 The Royal Blues dropped valuable points as they try to secure a second place finish. Nabil Bentaleb was sent off early in the match after the video assistant referee changed the yellow card he received for a handball to a red. Gladbach forward Raffael tapped in a cross from Thorgan Hazard to put the visitors ahead, but Caliguiri leveled the score in first half stoppage time. Luckily for Schalke, Dortmund were unable to win on Sunday, so they remain in second place for the time being.

Worryingly for Gladbach fans — and for Germany — the Foals' captain Lars Stindl had to be helped off the pitch after picking up and ankle injury. He has been ruled out for the rest of the season, as well as the upcoming World Cup.

Borussia Dortmund passed up a chance to go second in the table after drawing with Werder Bremen on Sunday. Marco Reus put Dortmund ahead in the first half, collecting a headed ball from Lukasz Piszczek before finishing with his right foot. But Thomas Delaney leveled the score just before halftime with a lobbed header over Roman Bürki. As a result, Dortmund remained two points behind Ruhr valley rival Schalke in third place, while Bremen held firm in 12th place.

Hoffenheim's late bid for Champions League qualification received another boost on Friday night as Andrej Kramaric's hat-trick saw off a plucky Hanover. The win moves Julian Nagelsmann's side up to fourth place, a point ahead of Bayer Leverkusen, with the latter still to play this matchday.

Kramaric's opener, the simplest of finishes, was cancelled out with a goal of similar ease in the first half. His second was a peach, however, lashing home a fierce volley after finding himself unmarked from a corner. Kramaric's goals took his tally to twelve for the season and his third, in particular, a delightful chip over a back-peddling Philipp Tschauner, was one for fans to savour.

It wasn't all good news, however, with the sign of Serge Gnabry leaving the pitch clutching an ice pack to his thigh, in the eighth minute, a concern with Hoffenheim's season at such a crucial juncture. The forward had been in scintillating form of late and the injury may also dampen his World Cup chances.

A late goal away in Dresden sealed Fortuna Düsseldorf's ticket back to the top flight of German football with two games to spare. The second division league leaders last played in the Bundesliga in the 2012/13 season. (28.04.2018)

Cologne have been relegated from the Bundesliga for the sixth time in their history after a 3-2 away defeat at SC Freiburg. Elsewhere, Hamburg beat Wolfsburg to move them within two points of a miraculous escape. (28.04.2018)