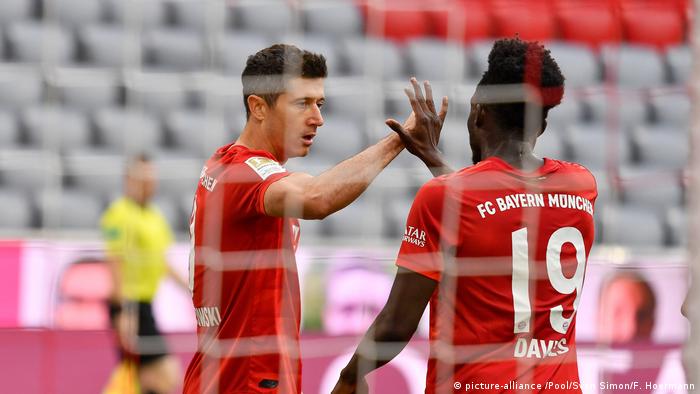 Bremen's great escape is on!

Another brilliant goal from Leo Bittencourt gave Werder Bremen another huge three points in their fight against relegation. Hosts Schalke were disappointing again and alarmingly lacked the courage to really threaten until midway through the second half. Bremen's win means they are now just two points off the relegation playoff spot after Fortuna Düsseldorf lost to Bayern.

Hertha Berlin beat Augsburg 2-0 in a victory that was hard-fought. Since the restart, Hertha have won 10 points, scored 11 and only conceded two in their four games. Bruno Labbadia has made an astounding difference to the big city club in a very short period of time, stabilising the defense but also unleashing the attack. This Hertha Berlin look a different team and are making a late charge for Europe. 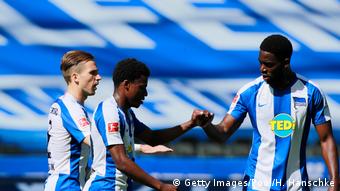 Marcus Thuram scored a brace and a goal and two assists from Alassane Plea was all the quality Gladbach needed to overcome Union Berlin. Thuram's celebration, a reference to Colin Kaepernick's "take a knee" protest against police brutality, led to a moment of pause amidst the football. There's plenty more on that  here.

There was also a nice moment in the game when Mamadou Doucoure was brought on to finally, after four years, make his Bundesliga debut. The 22-year-old defender has overcome a number of injuries and to applause from all the Gladbach players and a hug from Thuram, Doucoure played his first few minutes.

Six of the best for Dortmund!

After a tepid first half, Dortmund exploded in the second to beat Paderborn 6-1. Jadon Sancho scored a hat trick and looked a different player to the week before. Achraf Hakimi also bagged a goal, as did Marcel Schmelzer off the bench. Dortmund haven't given up yet but it feels too little, too late.

Any concerns that Bayern might drop off after claiming a huge three points against Dortmund midweek were banished by halftime against Düsseldorf. Bayern looked majestic, again. Benjamin Pavard impressed, Robert Lewandowski scored two and Alphonso Davies also got his name on the scoresheet in a 5-0 win. Hansi Flick has made this team fun to watch but also formidable to face.

Leverkusen made their humbling at the hands of Wolfsburg look little more than a blip after their 1-0 win over Freiburg. Kai Havertz made the difference once again, although Christian Streich's side should have got a point.

The final game of the matchday was a non-stop highlight reel. All six goals in RB Leipzig's 4-2 away win over Cologne were high quality. Anthony Modeste's curler, Jhon Cordoba's off-balance pile driver, Dani Olmo's sweet strike, Patrick Schick's towering header, Christopher Nkunku's impudent dink and Timo Werner's solo effort scored directly after a long kick from his own keeper. At the end of it all, Julian Nagelesmann's team wrestled back third spot.

"I know roadrunner. I take it as a compliment."
Alphonso Davies on Thomas Müller's nickname for him

"He [Thuram] cut to the chase. He took a stand against racism, one that we wholeheartedly support."
Gladbach head coach Marco Rose on Marcus Thuram's celebration

"Because we are really, really ambitious."
David Alaba on why no one can beat Bayern

"We noticed quite early on that this pitch was a bit too quick for us."
Uwe Rösler after Fortuna Düsseldorf's defeat against Bayern

"It was a hard-fought game, exactly like us Scandinavians love it."
Hoffenheim's Harvard Nordtveit after the win in Mainz

"This is the third game in a row where we have shown a completely different mentality... We can't stop now and think we're amazing."
Werder Bremen's Leonardo Bittencourt after the win vs. Schalke

"I don't want to use the coronavirus or anything else as an excuse. We are an incredibly bad spot."
Schalke's head coach David Wagner

"I think today, I am the best head coach I have ever been because the experience of coaching is incredibly important."
Hertha Berlin head coach Bruno Labbadia - Werder Bremen made it three straight clean sheets in the league. That's the first time that's ever happened under Florian Kohfeldt, and the first time at the club since the 2013/14 season. Timing.

- Jadon Sancho scored his first ever hat trick in professional football. He is also the youngest player in the Bundesliga to score 30 goals.

- Hertha Berlin are flying, thanks largely to Bruno Labbadia. He is the first Hertha head coach to remain unbeaten in his first 4 games since Falko Götz in the 2001/2002 season.

- Alphonso Davies is fast, that much we know. Against Fortuna Düsseldorf on matchday 29, he clocked an astounding 35.4km/h.

- The away win trend continued in the Bundesliga. Five of the nine games ended in victory for the visitors, adding more evidence to the argument that the absence of fans is costing home teams.

- Havertz's goal was his 35th in the Bundesliga, the most anyone has ever scored before their 21st birthday. His talent keeps growing.

- After scoring his 28th Bundesliga goal of the season, Robert Lewandowski secured another record. He has now scored against every current Bundesliga team.

After the tragic death of George Floyd in the US, many players showed their support on social media. On the pitch, Schalke and US midfielder Weston McKennie wore an armband with the words "Justice for George" for Schalke's game against Bremen. On Sunday, Marcus Thuram took a knee after scoring for Gladbach and later Jadon Sancho, after scoring for Borussia Dortmund, revealed a message of support on his undershirt.

A handful of Bundesliga players signaled support for the fight against racism after the killing of George Floyd. DW's Jonathan Harding says they have every right to do so — and now is the time to offer support. (31.05.2020)