As demonstrations against police brutality and racism continue in the US, big Bundesliga names have shown their solidarity and help spread the message. The response from German football authorities is, as yet, unclear. 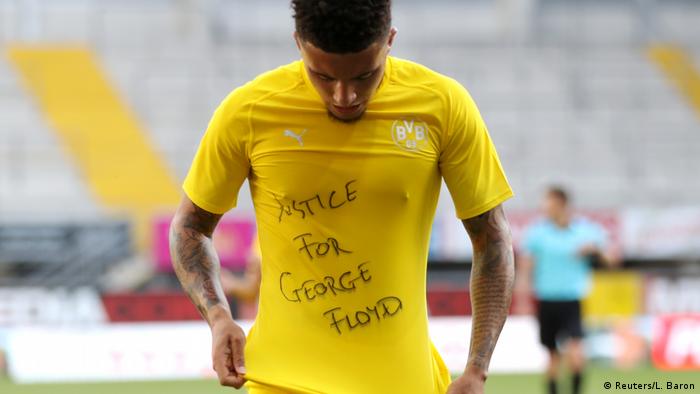 Borussia Dortmund's Jadon Sancho scored his first hat-trick in professional football this weekend, becoming the first English player to score three goals in a major league outside England since 1989.

But his feat has been eclipsed by an even more powerful statement carried on his yellow undershirt as he led the Bundesliga's response to the ongoing protests against police brutality and racism in the US.

"Justice for George Floyd," read the message unveiled by the 20-year-old following his first goal in Dortmund's 6-1 win against Paderborn on Sunday. His teammate, 21-year-old Moroccan international Achraf Hakimi, revealed the same message when he netted Dortmund's fourth.

Taking to social media post-match, Sancho called his first professional hat-trick "a bittersweet moment … as there are more important things going on in the world today that we must address and help make a change. We have to come together as one & fight for justice. We are stronger together!"

Elsewhere this weekend, Bundesliga teams may have been playing in empty stadiums but several players were well aware of the audience watching on television, and used their platform accordingly.

Borussia Mönchengladbach's Marucs Thuram "took a knee," in reference to Colin Kaepernick's famous protest in the NFL, after he had put his side 2-0 up against Union Berlin.

He later tweeted: "Together is how we move forward, together is how we make a change," and received support from Al-Hilal star Bafetimbi Gomis as well as legendary Argentinian striker Hernan Crespo, who played with Thuram's father Lilian for Italian side Parma in the late 1990s.

"I remember you walking hand in hand with your Dad, Lilian, in the park in Parma," Crespo wrote. "I am happy and proud you have the personality and sense of civic duty your dad always displayed."

Meanwhile, US international Weston McKennie wore an armband with the words "Justice for George" during Schalke's 1-0 defeat to Werder Bremen. Later, on Instagram, he wrote: "We have to stand up for what we believe in and I believe that it is time that we are heard!" The midfielder added on Monday that he "continue to pay tribute to George Floyd in some way" in an interview with Forbes. 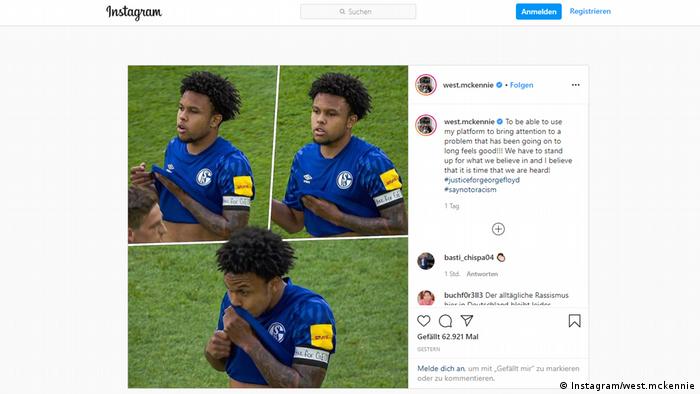 Schalke's sporting director, Jochen Schneider, offered the club's full support. "Weston has sent a clear message about this unbelievable incident and against racism," he told tabloid BILD. "We back our player's position one hundred percent."

But in a post published on their website on Monday, Germany's football association, the DFB, said their control committee would look in to the actions of Thuram, Sancho, McKennie and Hakimi.

They accepted circumstances were different in each case but pointed to the fact that a player removing his shirt was punishable with a yellow card regardless of any message. Thruam's protest was "open to interpretation" and not within the remit of the referee the statement read, while DFB president Fritz Keller said he "morally can absolutely understand the actions last weekend. What happened in the USA can't leave anyone cold."

Several other Bundesliga players also made their voices heard on social media. Anthony Ujah posted a message of support on social media, Erling Haaland posted on Instagram with the words: "Spread love not hate, Speak up." Bayern Munich's Corentin Tolisso and David Alaba also showed their support and Chris Richards, a Bayern Munich reserve team player from Alabama in the US, said he was playing for "more than just this jersey." "Players should be vocal" - Oliver Kahn

"Sometimes, I wish players would take even more responsibility," he said. "They should be vocal and express their opinions on social issues. They can send very, very important signals."

The German football association (DFB) control committee is expected to investigate though, as regulations from the DFB and the German football league (DFL) stipulate that political messages are not allowed to be conveyed on kit or during the game.