Another week of Bundesliga football, and Kai Havertz delivered another moment of game-changing magic. Without their playmaker, Leverkusen look a different side. 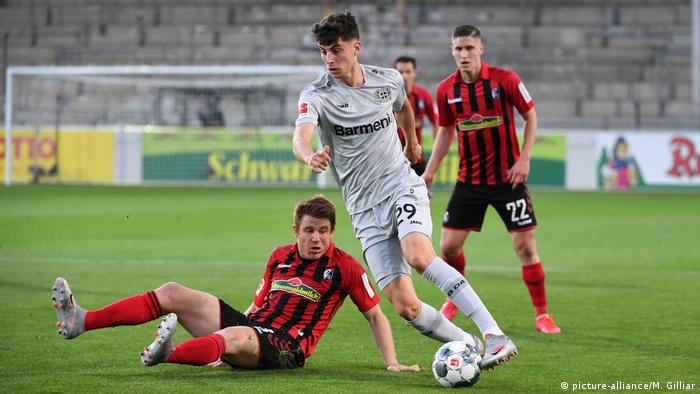 There's something shark-like about Kai Havertz's movements on the football pitch. He lurks around the edge of the box, moving with the kind of quiet intent that is both intimidating and fascinating.

And then, after nearly an hour of biding his time, Havertz, fittingly dressed in sleek silver, strikes swiftly and effortlessly.

A flick, a turn, and suddenly he glides through Freiburg's defense like they are clumps of red coral reef. Havertz finds another gear, moving so fluidly it's as if he is generating the current of the game. After a neat bit of work from Leon Bailey, Havertz gets the ball back, holds off defenders and somehow pokes the ball between the legs of Alexander Schwolow. 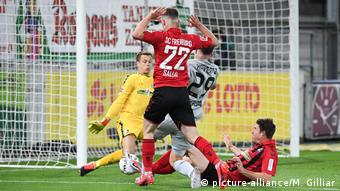 Havertz somehow manages to squeeze the ball past Schwolow

The goal wins the game for Leverkusen, and was Havertz's fifth since the restart. He now has 35 goals in the Bundesliga, the most anyone has ever scored in Germany's top flight before they turned 21.

Ten minutes later, the intake of breath from Leverkusen's bench was almost audible as Havertz limped off with a bloody knee.

Peter Bosz's six changes and fatigue undoubtedly contributed to Leverkusen's limp finish but without Havertz, Leverkusen are a different team, one short of his decisive instinct. Seventeen-year-old Florian Wirtz showed a few glimpses of his potential, but it's far too early to know whether the player labelled Havertz's successor can indeed fill that role.

As a largely unspectacular Bundesliga game ended, Freiburg head coach Christian Streich slapped his own head in disbelief at how his team hadn't secured a point. The reason was one many other Bundesliga teams know all too well. Their fate had been decided by Kai Havertz.

Borussia Dortmund had goalkeeper Gregor Kobel to thank as they held on to beat Bayer Leverkusen. Marco Reus scored the winner, but injuries to new arrival Karim Adeyemi and others are tempering expectations.