Dortmund won the big game of the weekend, with Thorgan Hazard making a big impression on his return to Mönchengladbach. Bayern extended their lead as Leipzig dropped points — and we saw more fan protests across Germany. 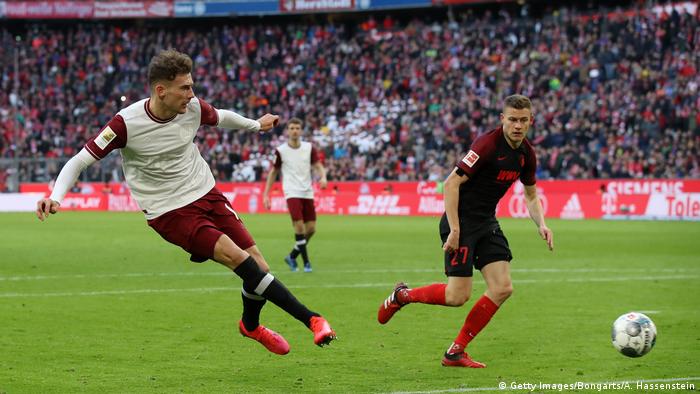 It was a good weekend for Bayern Munich, but that was more because of results elsewhere than the labored nature of their 2-0 win over Augsburg. Playing in their special 120th anniversary kit and greeted at the start by an impressive stadium-encompassing choreo, Bayern mustered only two shots on target in the opening 45 minutes. The hosts stepped things up in the second half with Thomas Müller and Leon Goretzka finding the net as Bayern eventually eased four points clear at the top, but they owed Manuel Neuer for a big save late on. However, it was RB Leipzig's failure to get the job done at Wolfsburg that made it possible for Bayern — but more on that below... 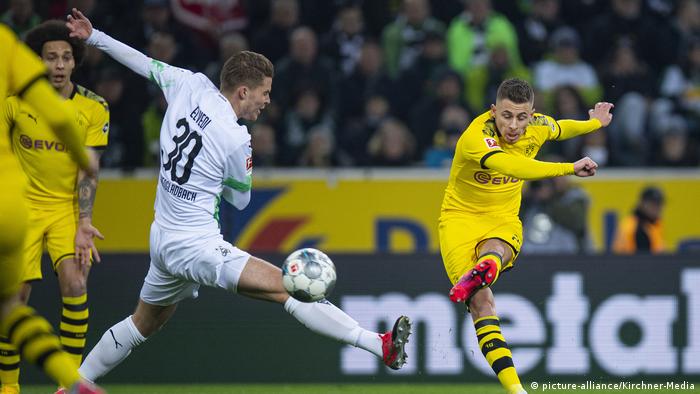 Hazard scores the opener on a night when he impressed against his former club.

With Jadon Sancho surprisingly named on the bench, Lucien Favre was looking to his supporting cast to provide attacking thrust against Borussia Mönchengladbach. With Erling Haaland unusually quiet, Thorgan Hazard was the man to take up the slack at the ground where he made his name in a breakout season last term. Hazard opened the scoring for Dortmund and proved hard to handle all Saturday evening. But it was Achraf Hakimi, with a little help from substitute Sancho who laid on a 15th Bundesliga assist of the season, who ensured Lars Stindl's earlier equalizer counted for nothing. While Dortmund keep up the pressure at the top, Gladbach are starting to look over their shoulder after a strong start.

For the first time in the Bundesliga this season, Julian Nagelsmann left his top scorer Timo Werner on the bench, perhaps with the Champions League  return leg against Spurs on Tuesday in mind. While the arrival of Patrik Schick appeared to have lightened the load on the German forward, Werner's absence was keenly felt as the Red Bulls struggled to a 0-0 draw away in Wolfsburg. Leipzig have now drawn three of their last five in the Bundesliga and Nagelsmann must be wondering if he did the right thing - both with Werner and with his talking down of their title chances.

Hertha Berlin have veered from spectacular to self-destructive all season, with Jürgen Klinsmann's leaked diaries just one twist in a bizarre season. The capital club are even now managing to squeeze their mood swings in to 90 minutes. After roaring back from three goals down to nick a point off Fortuna Düsseldorf last week, they allowed struggling Werder Bremen to race in to a two goal lead before Hertha pegged them back on Saturday. Those comeback draws against two of the sides that could have dragged them in to the relegation scraps probably allows the cashed up Berliners to breathe easy enough. 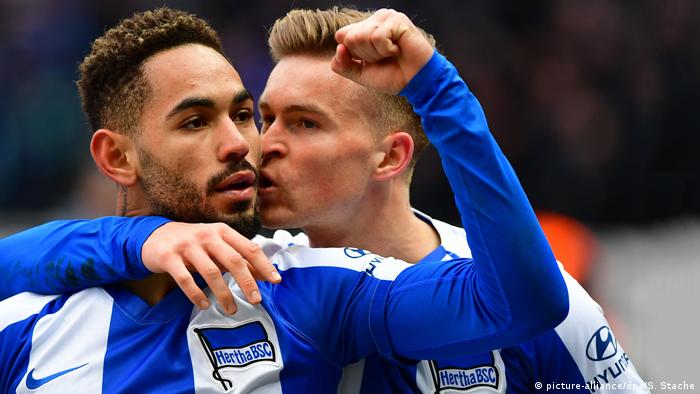 Hertha Berlin staged another comeback to get themselves out of jail.

Judged against the high standards he's already set himself, Kai Havertz had a frustrating start to a campaign where so much was expected, scoring just once in the last 13 games before the winter break. But the 20-year-old was irrepresible in Bayer Leverkusen's 4-0 win over Eintracht Frankfurt on Saturday, scoring the opener after four minutes and laying on another for Paulinho before being withdrawn early to save his legs. The Werkself have lost just one in 12 since that winter break and are still alive in the German Cup and Europa League despite an injury to striker Kevin Volland. Havertz is widely expected to leave Leverkusen in the summer but might just leave a trophy to remember him by. Or at least a return to the Champions League.

He wasn't the only youngster to impress, with two of the Bundesliga's new wave of Americans making the early running on Saturday. Josh Sargent (20) scored his first for Bremen since the reverse fixture against Hertha in October while Weston McKennie's (21) first of the season opened the scoring for Schalke. But neither of their sides could manage to take more than a point, with Schalke's strong start becoming a distant memory and Bremen being cut adrift.

— "We're biting our own asses"
Hertha Berlin defender Niklas Stark on Hertha going behind 0-3 to Düsseldorf and 0-2 to Bremen, and drawing both games.

— "It would be nice if we could stop now, I'd like to watch the game"
Leverkusen coach Peter Bosz at his post-match press conference, which was getting dangerously close to the start of Gladbach vs Dortmund.

—  "I'm glad Dortmund won't be coming back. Three times is enough."
Gladbach coach Marco Rose is happy to see the back of Borussia Dortmund.

— "There was little cause to bubble with ecstasy"
Julian Nagelsmann's honest appraisal of his team's dull goalless draw at Wolfsburg. 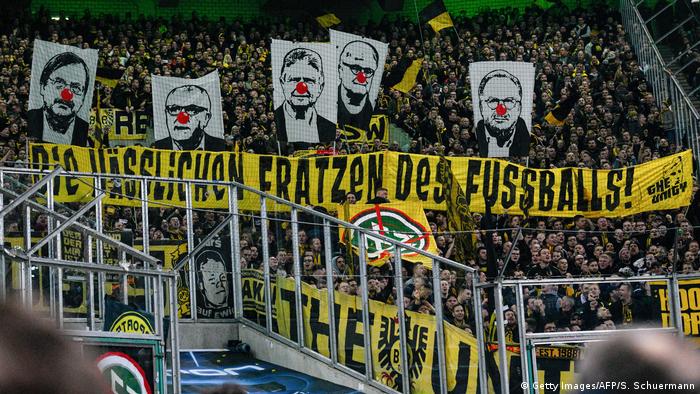 — Hansi Flick has now amassed 37 points from a possible 45 in his first 15 games as a Bundesliga coach. Only Pep Guardiola, who collected 41 points, has achieved more.

— Dortmund's win at Mönchengladbach was their tenth straight league victory over the Foals.

— Jadon Sancho has now assisted 15 goals in the Bundesliga this season, a new personal record. The only Dortmund player to assist as many goals in a single Bundesliga season was Henrikh Mkhitaryan 2015/16, when he also notched up 15.

— Kai Havertz became the youngest player to reach 30 Bundesliga goals at 20 years and 270 days. But with Jadon Sancho just three goals behind and nine months younger, that record may not last long.

—  After last weekend's drama, protest banners were raised in stands across Germany, with Hoffenheim owner Dietmar Hopp, German football's governing body the DFB and Bayern Munich's top brass among the subjects of fans' ire. This is far from over — more on that and the mainstream media's responsibility in the conflict here.

Amid the fan protests against Hoffenheim owner Dietmar Hopp on Matchday 24, the remarkable form of Jadon Sancho continued. The Dortmund forward is one of football's hottest properties, but his next move will be crucial. (03.03.2020)

Last weekend saw another escalation in the fan protests against Hoffenheim benefactor Dietmar Hopp. German fan expert Michael Gabriel spoke to DW about the conflict between the fans and the German football establishment. (03.03.2020)