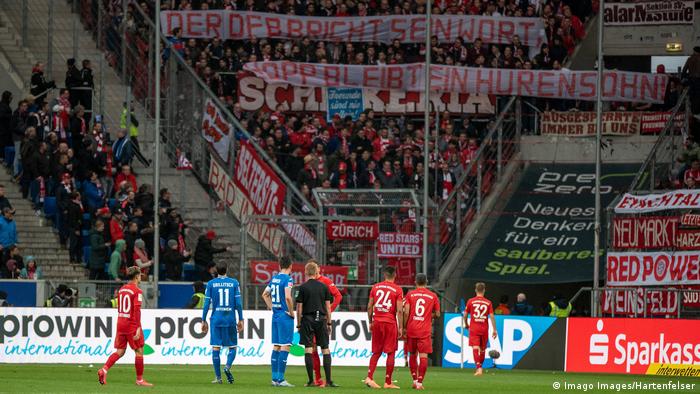 Bayern Munich beat Hoffenheim 6-0 in the Bundesliga on Saturday but the match ended in bizarre scenes when the teams first left the pitch and then agreed to play out the remaining 13 minutes under truce conditions.

Play was first interrupted briefly in the 67th minute, moments after Leon Goretzka scored Bayern's sixth goal, and when Bayern supporters in the away end displayed banners referring to Hoffenheim benefactor and owner Dietmar Hopp (79) as a "son of a whore."

Bayern's players approached their supporters and pleaded with them to stop, as did members of Bayern Munich's coaching staff and club board, including head coach Hansi Flick, sporting director Hasan Salihamidzic, chief executive Karl-Heinz Rummenigge and board member Oliver Kahn.

Both teams then left the field as officials implemented level two of UEFA's three-step procedure – which was originally introduced as a response to incidents in racism in football.

When they re-emerged, the players ran down the remaining 13 minutes by simply passing the ball among themselves and refusing to play in a joint protest against the actions of the fans.

"I am ashamed of what has happened and I have apologized to Dietmar Hopp," said Bayern CEO Rummenigge, adding that it was a "dark day for football."

"We will take action against these people in the stands," he said. "They have absolutely no place in a football stadium."

Hopp himself responded on Sunday in an interview with Sport1: "If I remotely knew what these idiots wanted then it would be easier for me to understand. I can't explain why they are so hostile to me. This reminds me of dark times."

"I don't want a conversation with those people. That's pointless. They live in another world. I don't want to talk to them, I can't talk to them. I don't even know what I would say to them."

There was also a response from Bayern fans on Sunday. "Südkurve München",a website for Bayern's ultra groups, released a statement saying the DFB broke its word on collective punishments and that even though the topic of Hopp is "not so relevant to us", they see this as "an attack on fan rights in general."

The head of the German Football League (DFL), Christian Seifert, said the protests against Hopp had reached a "depressing peak."

"The hostility has long since ceased to be acceptable and is to be condemned in the strongest of terms," he said in a statement. "There is no excuse. There is no place for any form of hate."

"Mr. Hopp has earned great wealth through hard work, but he gives it all to sport, social projects and medicine, and for that he is being named and shamed? Where have we got to in this country? This is not on anymore. We have to set an example against hate and jealousy in society." 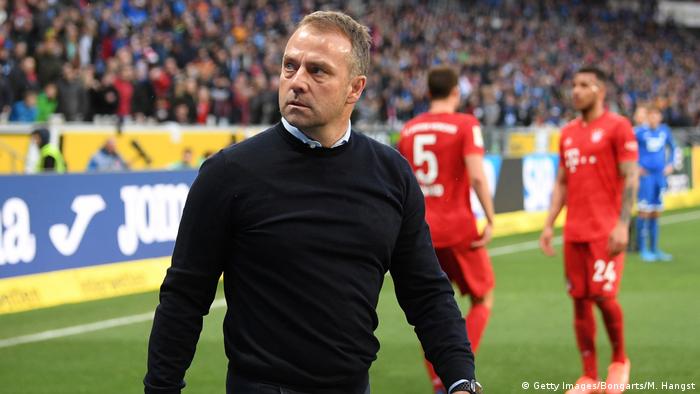 The banners displayed by the Bayern supporters were the latest in a long range of protests by German football fans against Hopp and Hoffenheim, a dispute that has escalated dramatically in recent weeks and months.

In June 2019, several Borussia Dortmund fans were handed heavy fines after being found guilty of singing defamatory songs about Hopp and displaying the same derogatory banners, one of which depicted the benefactor's face in a crosshair.

Dortmund fans were also collectively handed a two-game ban for away fixtures in Hoffenheim, suspended until a case of repeat offense. When they again used the chants and banners at the meeting between the two sides in December, the punishment was implemented.

Last week, in solidarity with the Dortmund counterparts, Borussia Mönchengladbach fans displayed the same crosshair imagery during their team's 1-1 draw with Hoffenheim, prompting the Gladbach sporting director Max Eberl and captain Lars Stindl to plead with them to stop.

This week, at the same time as the game between Hoffenheim and Bayern Munich, Borussia Dortmund supporters were again warned by the stadium announcer at the Westfalenstadion to stop chanting about Hopp during their side's 1-0 win over Freiburg. Later, Cologne supporters unveiled a similar banner during their win over Schalke, prompting more scenes of players and coaches going over to the stands to ask them to stop.

On Sunday, Union Berlin's game was twice stopped. The first pause came because of a banner criticizing the DFB's collective punishment of fans, the second for a banner of a crosshair with Hopp's face and the word "son of a whore."

Union fans came over to speak to fans, but the game was suspended after the second banner following the three-step procedure. Union stadium announcer Christian Arbeit came onto the pitch during the second break.

"There is a three-step procedure. We are at step two. One more indiscretion and we're at level three and we're all going home... Switch your brains on." 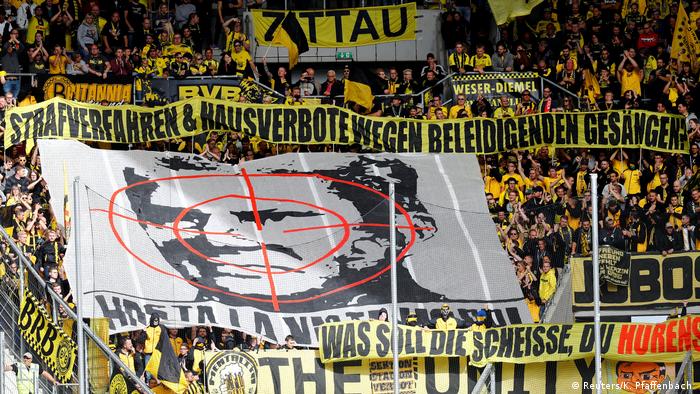 Borussia Dortmund fans have been regular critics of Hoffenheim and Hopp

Who is Dietmar Hopp?

Hopp, the billionaire co-founder of German software company SAP, has been an unpopular figure for many German football fans after financing the rise of his local team TSG 1899 Hoffenheim from the amateur regional leagues to the Bundesliga and the Champions League to the tune of over €350m.

In July 2015, he was granted an exemption from German football's 50+1 ownership rule, which stipulates that club members – in other words, the fans – must control 50 percent of shares with voting rights in the club, plus one share. In this way, external investors are prevented from acquiring majority stakes in football clubs as they are elsewhere in Europe.

Exemptions are made for investors who can demonstrate that they have supported a club substantially and consistently for a period of 20 years, and apply to Bayer Leverkusen (Bayer pharmaceuticals), Wolfsburg (car manufacturer Volkswagen) and Hoffenheim.

Nevertheless, fans of the majority of Germany's other member-led clubs still consider the Hoffenheim ownership model to embody the perceived over-commercialization of the game. They accuse the club, from a small village in the Rhine-Neckar region in the south-west of the country, of being an artificial construct that owes its place in the Bundesliga to unfair financial means not available to others. 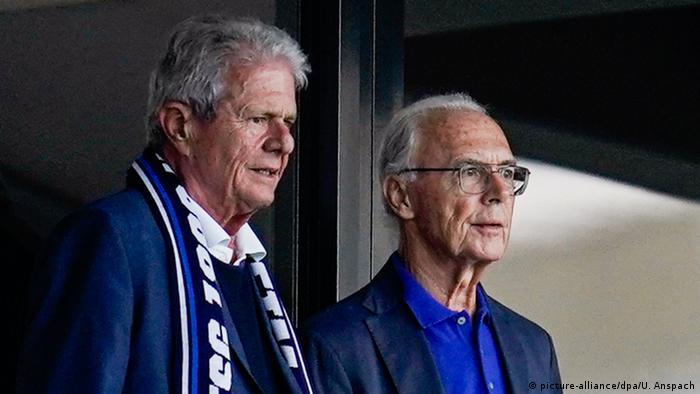 Dietmar Hopp (left, with Franz Beckenbauer) has financed Hoffenheim's rise to the Bundesliga

Protests, generally featuring the crosshairs imagery used by Dortmund fans, have been commonplace ever since Hoffenheim's promotion to the Bundesliga in 2008, but had begun to ebb away until the recent court cases involving Dortmund fans. Since then, they have returned more intensely than ever and the dispute has escalated on both sides.

Last week's protest by Borussia Mönchengladbach fans led several club officials, commentators and media outlets to draw direct parallels with the far-right terrorist attack in Hanau days earlier, that left 11 people dead, including the perpetrator. The protests by the Bayern Munich fans in Hoffenheim have been accompanied by similar tones.

The general message is that both forms of attack had been motivated by the same "hate" and "intolerance" in society, but the comparisons have drawn strong criticism from supporters' and anti-discrimination groups, who argue that such links risk sensationalizing the debate over football club ownership while simultaneously downplaying the threat of right-wing extremism in Germany.

Furthermore, critics have questioned why recent incidents of racism in German football, including monkey chants aimed at Hertha Berlin player Jordan Torunarigha in Gelsenkirchen, have not been met with the same outcry and threats to abandon matches, suggesting that Hopp enjoys a degree of protection from football's authorities that others don't.