Representatives from Bayern Munich's fan and ultra groups have criticized the public outcry that followed their protests against Dietmar Hopp, while also reflecting on the language used in some of the banners. 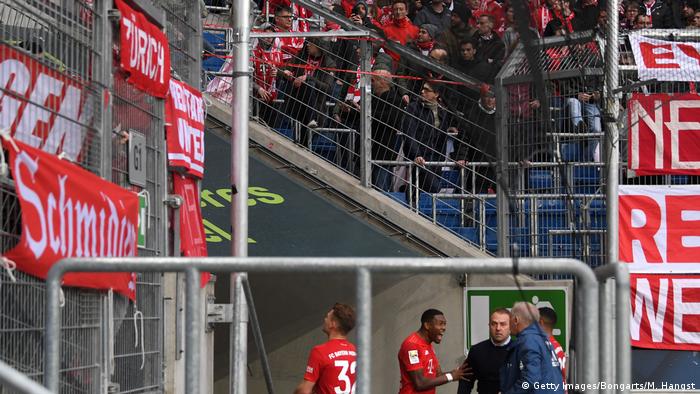 Representatives from Bayern Munich's fan and ultra scene have reacted to Saturday's events in Hoffenheim, in which a game came to a stop due to a series of banners against Hoffenheim owner Dietmar Hopp.

"Südkurve München", a website known to communicate messages of Bayern Munich's ultra groups, took to their social media account to explain their view of the incidents in Sinsheim.

The statement starts in a rather reflective manner, saying the term "son of a whore" is "not the language we would normally use." The statement adds, however, that this is a language often heard at football games across Germany, and that the need for grabbing people's attention left them "no other choice" but to use the term, which was used by other fan groups in previous protests against the Hoffenheim owner.

"If we're going to interrupt football games whenever such insults are said, it will no longer be possible to finish the whole 90 minutes," reads the statement.

Club Nr. 12, an umbrella organization known to represent a large number of organized Bayern Munich fans and members, also released a statement about the events in Sinsheim.

While the organization distances itself from the insults shown in the away end, it also added that the reactions were "over the top and untrustworthy."

"In the previous weeks, we've seen enough racist and sexist incidents in German stadiums where we could have set the example," the statement read, referring to the racist abuse Hertha Berlin's Jordan Torunarigha and Würzburger Kickers' Leroy Kwadwo suffered during matches.

"When there's a patron involved whose business happens to be a financial partner of the DFB, that's when they say a red line was crossed," reads the statement.

Bayern Munich President Herbert Hainer said in a statement released on Sunday that the club will "examine all the options" to prevent similar actions in the future.