Hansi Flick sealed back to back league wins as Bayern Munich brushed aside Fortuna. The 4-0 win moves them just a point behind league leaders Gladbach, on a day when Robert Lewandowski finally failed to score. 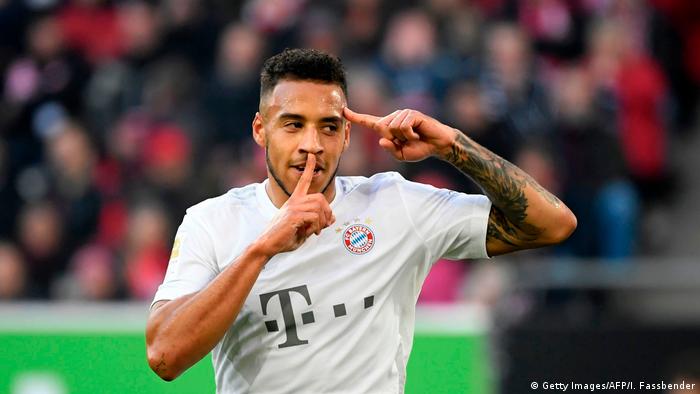 The term “walk in the park” was created for such occasions. Bayern’s 4-0 victory over Fortuna Düsseldorf will go down as one of their most routine of the season with goals from Benjamin Pavard, Corentin Tolisso, Serge Gnabry and Philippe Coutinho.

Not on the scoresheet, however, was Robert Lewandowski, with the Pole failing to score for the first time this Bundesliga campaign. His run ends with 16 goals from the first eleven matches of the season; a frankly ludicrous run of form. Alas, all good things come to an end and Fortuna can at least take some small solace in being the ones to halt the record.

Bayern were dominant from the first whistle and went close several times before Benjamin Pavard broke the deadlock in the 11th minute. A short corner found Joshua Kimmich, whose deep cross appeared to have missed everyone before finding the back of the net. Replays appeared to show the slightest of touches from Pavard, however, a gust of wind from one of his flailing shoelaces apparently helping the ball on its route to the target.

Bayern’s second goal stemmed from a defense splitting pass. The problem was, the pass came from Düsseldorf’s own goalkeeper, who missed both of his own defenders and gifted the ball to a rampaging Thomas Müller. The German played it wide to Kimmich, whose cross found Tolisso just metres from goal. It couldn’t have been easier.

Müller and Kimmich were again at the heart of things for the third goal. The latter’s low cross was just inches away from Müller’s outstretched toe. A simple tap-in was denied by some last gasp defending but Fortuna’s failure to clear the ball handed Müller a second bite at the cherry. He unselfishly teed up Gnabry who smashed home.

Coutinho scored his second in Bayern’s colors at the end of a blistering counter in the 70th minute. A Javi Martinez clearance started an attack which, seconds later, saw Coutinho exchange passes with Lewandowski before slotting in Bayern’s fourth.

The win puts Bayern just a point behind league leaders Gladbach, whose 2-0 away loss to Union Berlin will have broadened Bavarian smiles further still. On this evidence, Bayern must be favorites for a ninth straight Bundesliga title.

Peeeeeep! It's all over in Düsseldorf. Lewandowski fails to score for the first time in the league this season. 4-0 it ends thanks to goals from Pavard, Tolisso, Gnabry and Coutinho. More to follow in the post game report. Thanks for tuning in!

75' - GOAL DISALLOWED! Fortuna have one chalked-off for offside. Manuel Neuer makes a hash of his clearance and the hosts pounce. Unfortuantely, Morales is standing in an offside position when the ball comes back to him metres from goal. His cross is slotted home by Rouwen Hennings but the flag is already up.

70' GOAL! Phil Coutinho makes it 4-0 as Bayern punish Fortuna ruthlessly on the break. Martinez heads a cross clear and Bayern break. Moments later, Coutinho feeds Lewandowski on the left hand side and is there to greet the cross as it comes back in. In truth, Lewandowski's cross ought to have been cleared but it bobbled through somehow.

64' - Could this finally be the day Robert Lewandowski fails to score?! The big Pole heads straight at Steffen from a couple metres out; the goalie parries the attempt straight over the bar. Lewandowski's snatched at a couple of chances today but there's still time to keep this record going. He's currently on 16 goals in 11 matches, which is frankly ridiculous.

63' - Serge Gnabry is subbed off for Ivan Perisic. He's not seemed at his very best today but still found the back of the net.

59' - Bayern should be four up. Kimmich curls in a low cross and Robert Lewandowski finds himself on the end of it just a few yards from goal. He's at full-stretch, though, and can't get it on target. Great play.

50' - They might be 3-0 down but the atmosphere at the Merkur Spiel-Arena is pumping. Can't hurt that the team is giving it some this half. Fortuna go close again as Morales heads over.

45' - We're back underway in Düsseldorf and Fortuna have emerged a different beast if the opening minute is anything to go by. Dawid Kownacki races up the left hand side and cuts in before rifling a shot at Manuel Neuer. A very positive start to the second half from the home side.

HALF TIME - Walk in the park, this. Bayern have looked in control of this match from the moment Hansi Flick whacked on his murder mysteries podcast on the team coach this morning. Goals from Pavard, Tolisso and Gnabry have given the visitors a 3-0 lead at the break. They've got over 70% possession, had more than twice as many shots and Manuel Neuer hasn't had a save to make yet.

43' - Things calm down as Bayern seem content to take the 3-0 lead into half time. A couple of forays into the Fortuna final third end in an assortment of goalkicks, throw-ins and offside flags. Thrilling stuff.

33' - GOAL! Gnabry makes up for the miss with a simple tap in to give Bayern a three goal cushion. Kimmich's low cross is almost slotted in by Müller, but some clumsy yet effective defending manages to block the cross just in time. Müller latches onto the loose ball and, with back to goal, tees Gnabry up who can't miss from four yards out. Surely game over already?

30' - Bayern hit the post! A delightful, outside-of-the-boot Lewandowski cross is swung in from deep behind the Fortuna defense. Serge Gnabry bounds onto the waist-high ball and volleys against the right post. It was tight angle but he should have put Bayern three up!

27' - GOAL! Wow that was tragic. The aforementioned Steffen managed to pass, unpressured, straight to Thomas Müller on the edge of the Fortuna area. Müller played it wide to Kimmich, whose cross puts it on a plate for Corentin Tolisso.

14' - David Alaba does his best #CR7 impression by pumping a long-range freekick straight over the bar when a pass to a teammate might have been a better choice.

11' - GOAL! And it's a jammy one. Müller takes a short corner to Joshua Kimmich, whose cross from deep misses everyone before finding the far corner. Pavard ran around with his finger in the air but replays show he's a charlatan. Still, the goal is given to him so what do I know? 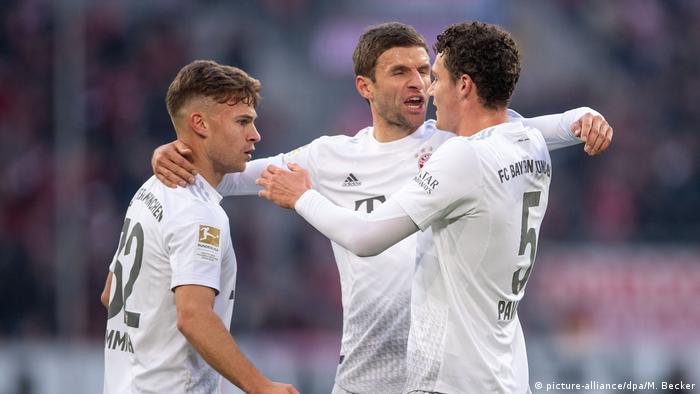 9' - Müller misses again! This time he's fed by Robert Lewandowski, who controlled the ball well under pressure inside the Fortuna box before teeing up the Germany World Cup winner. He shanks his shot wide of the right post when he really should have found the target.

2' - An early chance for Bayern, as Joshua Kimmich snaps into a tackle on the edge of the Fortuna box before feeding Thomas Müller. His shot is blocked, though, and Fortuna clear.

Peeeeep! - And we're off. Bayern Munich in all white, while Fortuna are sporting a new kit in collaboration with local punk rock band Die Toten Hosen (The Dead Trousers, literally translated). The shirt features the band's logo, a skull and crossbones. It's quite fetching.

The teams are in!

Here are the lads tasked with taming the Bayern beast this afternoon. Wish them luck...

Phil Coutinho returns to the lineup after missing out against Borussia Dortmund last matchday. Will the little Brazilian wreak havoc in Düsseldorf?

"We've scored in almost every game this season and I hope that we'll be able to score at least once on Saturday as well. You don't often win against Bayern, but every now and again you can pull it off. For us it's important to keep the game open for as long as possible. I've managed to pull off the odd success here or there - they are always fantastic moments."

"We're facing a team that defend very compact and has a lot of quality breaking forward quickly. They've proven that many times this season. We take each game as it comes and have to consider that we have lots of intense games ahead of us. It's important that we continue to communicate a lot with the team."

Düsseldorf a no-go for Lewandowski?

Robert Lewandowski is one of the most formidable strikers to ever grace Bundesliga pitches and his form this season is proving it. The prolific Pole has scored 16 in 11 Bundesliga matches this season - 23 in 18 in all competitions - but he's never scored against Düsseldorf in four previous meetings.

"I've worked very hard to get into this form. Things are going perfectly right now and my body feels good. It's good to have that in the back of your mind, but it doesn’t mean that I’m going to stop there: I want to get even better. I know when I can do more and when I have to ease off a bit. My passport might say that I'm 31, but I don't feel my age. I'm only just coming into my prime and hopefully, it'll last few a few more years. The best is still to come."

Bayern Munich are looking to maintain their momentum under Hansi Flick when they take on a Fortuna Düsseldorf outfit intent on being the next to upset the reigning champions. Follow all the action in DW's live blog. (22.11.2019)