The British prime minister said in Berlin that Brexit was 'on track' despite mounting pressure on her leadership. Her comments followed a meeting with world leaders in the German capital. 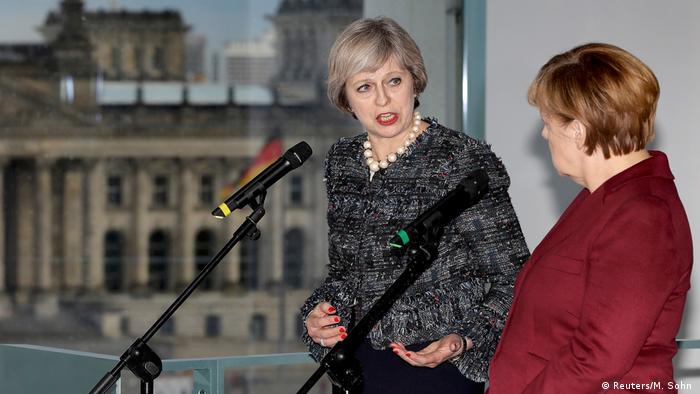 British Prime Minister Theresa May told German Chancellor Angela Merkel that Britain was on schedule for triggering Article 50 of the Lisbon Treaty - the step required to roll out the two-year Brexit procedures. She reassured the chancellor during her visit to Berlin that the legal process for Britain's exit from the EU would start by the end of March 2017.

"I will be able to update Chancellor Merkel on where we are on our Brexit preparations. Our work is on track; we do stand ready to trigger Article 50 before the end of March, or by the end of March 2017," May said.

The two leaders also spoke about the civil war in Syria as well as migration during their meeting, with May saying that they needed to address the "root causes" behind the refugee wave, which was particularly prevalent in Europe last year.

To discuss or to not discuss Brexit

Merkel said ahead of the meeting that there could be no real discussion on any further minutiae regarding Brexit until Britain started its formal process to leave the European Union next year.

However, German Finance Minister Wolfgang Schäuble had more to say on Britain's exit from the European Union than Merkel. He announced that Britain would not be granted an "a la carte menu" from which to choose the terms of Brexit. In an interview with the "Financial Times," Schäuble said that Britain still had financial commitments to the EU, which could continue until the year 2030.

Prime Minister May has been under fire for not presenting an EU exit strategy.  May still needs to hire up to 30,000 civil servants and has to pass a number of constitutional hurdles before the process can get underway.

The meeting between the Merkel and May came after they, alongside Italy's Prime Minister Matteo Renzi, French President Francois Holland and Spanish Prime Minister Mariano Rajoy, had gathered in Berlin for a final meeting with US President Barack Obama to discuss Europe's future relationship with the United States under the next President, Donald Trump.

The leaders all agreed that they would need to continue working together within the framework of old-established bodies, particularly NATO. In the light of Trump's recent statements against new bilateral deals such as the TTIP free trade deal, European leaders have expressed worry about the future of transatlantic relations.

Brexit among many open questions from EU summit

British Prime Minister Theresa May said negotiations on leaving the EU would take time at her first summit in Brussels. Pressing concerns such as Syria and a failing free trade deal with Canada stole much of her thunder. (21.10.2016)