Britain and US to fund anti-terror unit in Yemen to combat al Qaeda | World | Breaking news and perspectives from around the globe | DW | 03.01.2010

The US and Britain closed their embassies in Yemen over concerns about possible attacks. Earlier, the two nations vowed to jointly fight extremism in Yemen after the failed bombing of a US-bound plane. 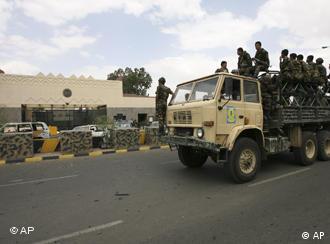 Yemeni soldiers in front of the US embassy in Sanaa

John Brennan, President Obama's assistant for homeland security and counterterrorism, said on Sunday the US has indications al Qaeda is planning an attack against a target in the Yemeni capital of Sanaa.

The United States closed its embassy in Sanaa on Sunday, saying it had taken the action "in response to ongoing threats by al Qaeda in the Arabian Peninsula to attack American interests in Yemen."

"We know that al Qaeda is out there. We know we have to mind our steps," Brennan told CNN.

A British Foreign Office spokeswoman also cited security reasons for the embassy's closure but did not say if any specific threat had been made.

Earlier, officials said that British Prime Minister Gordon Brown and US President Barack Obama want to see a bigger peacekeeping force in Somalia to tackle violent radicalism in the region.

"Downing Street and the White House have agreed to intensify joint US-UK work to tackle the emerging terrorist threat from both Yemen and Somalia in the wake of the failed Detroit terror plot," a statement from the office of the British prime minister, issued on Sunday said.

On Friday, Brown called a meeting of world powers to discuss how to combat the growing influence of al Qaeda in Yemen when government officials gather in London for a January 28 conference on Afghanistan.

"Amongst the initiatives the prime minister has agreed with President Obama is US-UK funding for a special counter-terrorism police unit in Yemen," the statement read. "In Somalia, the PM and president believe that a larger peacekeeping force is required and will support this at the UN Security Council." 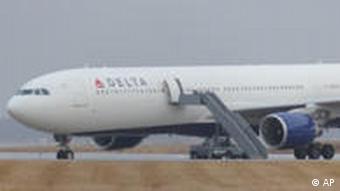 Twenty-three-year-old Umar Farouk Abdulmutallab - the Nigerian in custody in the US over the foiled December 25 plot - is thought to have been trained and equipped by al Qaeda.

The Yemen-based al Qaeda in the Arabian Peninsula (AQAP) has claimed credit for the attack.

Brown will also ask that the situation be discussed by the European Union and push for tougher action on Yemen from the Financial Action Task Force, an international body tackling money laundering and funding for violent extremist groups.

Yemen on Saturday welcomed calls by the British prime minister for a high-level international meeting to focus on extremism in the Gulf state.

The conference was on the "right track to rally international support for development, poverty reduction and counter-terrorism in Yemen," the official SABA news agency said.

SABA said "poverty and soaring unemployment in the developing world [are the] main factors [causing] extremism," and are used to attract youngsters to militant groups.

Police in Denmark say a Somali man has been charged with trying to kill a Danish cartoonist whose depictions of the Prophet Mohammed sparked violent protests around the world. (02.01.2010)

Increased US military involvement in Yemen could boomerang

The Obama administration has in recent months stepped up its intelligence support and funding of Yemeni security forces in a bid to counter threats by al Qaeda to attack Western and Arab targets in the Gulf. (31.12.2009)

Abdulmutallab's father warned US of his "extreme views"

The father of 23-year-old Umar Farouk Abdulmutallab, the Nigerian man charged with attempting to bomb a US passenger plane, previously warned US and Nigerian authorities of his son's extremist views. (27.12.2009)