Brexit: Migrants give UK a wide berth as other options abound | Business | Economy and finance news from a German perspective | DW | 21.11.2018

British firms are struggling with the biggest shortage of EU workers in two decades. A weak pound amid Brexit uncertainty means staying home or other EU states are more fruitful options. 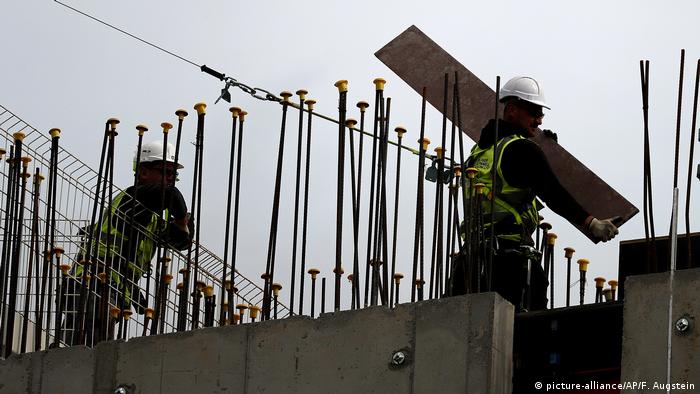 Several countries, including the United States, Germany, and Japan, are currently experiencing the tightest labor market in a decade. In Britain, however, a shortage of candidates to fill positions to fuel the country's buoyant economy is being exacerbated by Brexit, as workers from other European Union countries leave in droves or stay away altogether.

Nearly half of all UK employers say they are struggling to fill vacancies, the Recruitment and Employment Confederation's (REC) said in its latest "JobsOutlook" report, published on Wednesday. The recruitment industry's trade body says 53 percent of companies intending to hire temporary staff are also grappling with a lack of agency workers.

The number of EU nationals working in Britain fell by 132,000 to 2.25 million in three months compared with the same period last year, according to the UK's Office for National Statistics. The number of workers from eight Eastern European countries, including Poland and the Czech Republic, fell further — down 154,000 on the same period in 2017.

Read more: Spain threatens to vote No on Brexit deal over Gibraltar

"That's the biggest drop since 1997," Phil Campbell, REC's Senior Policy Advisor, told DW. He noted "widespread shortages" in the logistics, food, health and social care sectors, partly as a result of a lack of applicants from other EU states.

Britain's National Health Service (NHS), for example, relies on thousands of doctors, nurses and other medical staff from abroad to counter a shortage of native workers. Nearly 6 percent of the NHS's 1.2 million staff comes from other European Union countries, including Ireland, Poland, Portugal, and Spain. A tenth of NHS doctors are EU nationals, along with 7 percent of nurses.

Last summer, the NHS revealed it had failed to fill 41,722 nursing positions, in part due to a lack of interest from qualified staff from other EU countries, who until the Brexit vote in June 2016 were eager to take up jobs in Britain.

The referendum result, however, has left EU citizens in Britain in a state of flux for more than two years, during which time UK and EU negotiators plotted the country's withdrawal agreement. Rising animosity in Britain towards migrants — a major feature of a deeply divisive EU referendum campaign — has prompted many to leave.

Campbell acknowledged that the vote had caused EU workers to "feel less at home in the UK," before urging the UK government to get behind the message that they are still welcome. On the contrary, politicians have continued to fuel unease when they boast how Brexit will allow the country to better control its borders, or when British Prime Minister Theresa May declares that EU nationals will no longer be able to "jump the queue."

UK business leaders, who have continued to lobby the government for a smooth Brexit transition and the flow of foreign workers to be maintained, are yet to be convinced by another line of government rhetoric, which is that Brexit offers the chance to attract more highly skilled migrants to the country, as well as those from non-EU countries.

Other sectors experiencing worker shortages in Britain are the retail, agriculture, hospitality, and even the construction industry, which could struggle to meet very ambitious government targets for house building as a result.

"Construction is a sector where there are a large number of EU nationals and we need a balanced immigration system that allows these people to continue to come to the UK after Brexit," Campbell insisted.

Much of the EU is experiencing tight labor markets at present, particularly Eastern Europe. Poland, from where nearly 600,000 workers emigrated to the UK between 2004 and 2012, is struggling to replace its aging workforce amid an unemployment rate of just 3.8 percent.

A weak British pound and rising wages in Poland over the past decade means UK salaries no longer look so generous — a factor that appears to have convinced thousands of Poles to return home.

"Real wages in the decade to 2017 grew at 2.5 percent in Poland and fell by just under a third of a percent in the UK," said CIPD's Brinkley, citing figures from the Organization for Economic Cooperation and Development (OECD).

"Maybe workers think that Germany is better and a less hostile part of the EU, that there'll be no problem with visas or changes to the free movement of people," Brinkley posited.

Despite the shortage of staff, British companies appear reluctant to raise wages. Although the REC's Campbell said some firms were prepared to offer "record increases" in starting salaries for those switching jobs, overall wage hikes across the UK economy remain subdued.

Brinkley told DW that wages in Britain should be "roaring away" due to the lowest unemployment rate in 40 years. Instead, he said companies were attempting to fill the void by stepping up the recruitment of young workers through better links with schools and universities while trying to slow down the retirement of older workers.

Things are looking grim with regard to a Brexit deal and the Leave campaign's funding is under scrutiny. Meanwhile, Boris Johnson's pants are on fire and a Brexit commemorative coin is in the works. (06.11.2018)

The British PM has said she would not let removal talks distract her from a critical week of negotiations. Some MPs from her own party seek to oust her after seeing the details of the contentious draft Brexit deal. (18.11.2018)