The German chancellor has reassured Ireland's prime minister that the EU will demand an open border between Ireland and Northern Ireland. The EU and the UK appeared to make some headway on the issue this week. 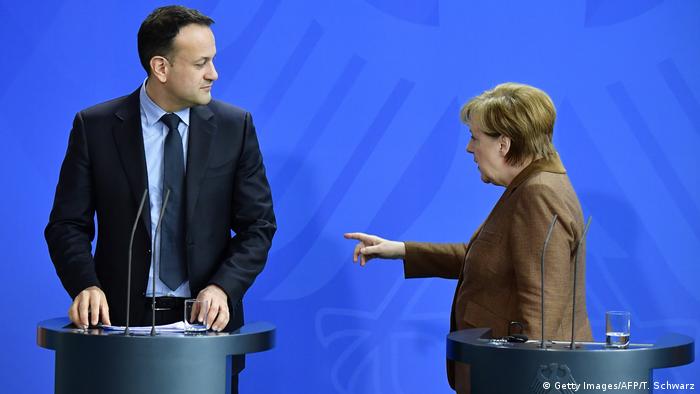 German Chancellor Angela Merkel and Irish Prime Minister Leo Varadkar said on Tuesday that keeping an open border between Ireland and Northern Ireland was an issue that still needed resolving.

Keeping a free border between the two Irelands has been a major sticking point in Brexit negotiations, which seemed to have made progress in recent days.

In a major development of Brexit negotiations on Monday, Britain and the European Union agreed to a 19 month transition period after the UK leaves the EU in March 2019. During those months, Britain will abstain from decision making in the bloc but will remain part of the single market and customs union.

As part of the transitional deal, Britain agreed to the EU's "backstop" plan to keep Northern Ireland in the customs union unless it comes up with a better idea.

"We heard yesterday with great joy that there was a consensus ... between the EU and the UK on the transitional phase," Merkel said at a joint press conference in Berlin with Varadkar.

"But of course we know that there are still a lot of problems to resolve, especially the border issue in Northern Ireland, which is very sensitive and central," she said.

The pair met for talks in Berlin just two days ahead of an EU summit on ties with post-Brexit Britain.

Varadkar said the backstop solution must "apply unless and until a workable alternative agreed solution is found." He called on Britain to produce "more detailed written proposals" that could be made legally binding.

If London proposes "something that is very close to a customs union, then I think that would solve a lot of the problems related to the Irish border, but if it's something much less and much weaker than that, then it would not."

British Prime Minister Theresa May has yet to release a detailed proposal on the border issue, despite repeated calls by EU, Irish and British politicians.

Varadkar said he was reassured by the depth of support from Germany. "Ireland can rely on us," Merkel said.

On Tuesday, the UK government will announce planned legislation on the Northern Ireland Protocol that could end up killing its post-Brexit deal with the EU. A trade war could follow.