Chief EU Brexit negotiator Michel Barnier has announced agreement on most of the issues that could allow the EU to offer Britain a transition deal. Some concerns about the Irish border still need to be resolved, though. 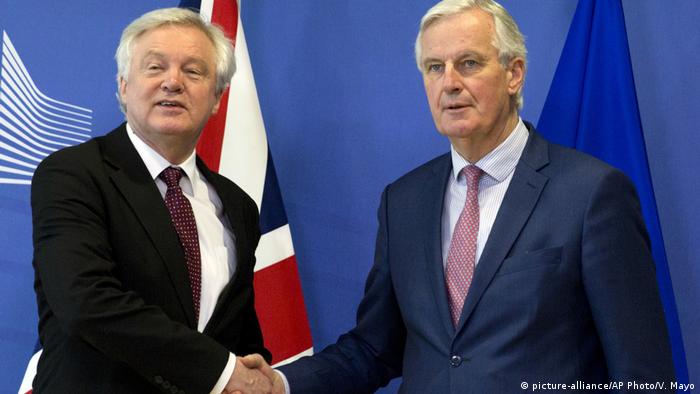 The EU's chief negotiator Michel Barnier announced on Monday that agreement had been reached on "a large part of what would constitute the orderly withdrawal of the United Kingdom."

He said that, after negotiators met at the weekend, there was broad agreement on a transition deal for the period after the UK leaves the bloc.

"We have reached an agreement on the transition period," Barnier told a press conference in Brussels after talks with his British counterpart David Davis. "The transition will be of limited duration."

The UK hopes to secure a transition period of two years that would maintain access to the single market while allowing more flexibility on issues such as forging trade deals with third-party countries. Agreement of a deal when EU leaders meet on Friday is vital for UK businesses.

The agreement foresees keeping all EU rules in place in Britain until the end of 2020. During the period, Barnier said, Britain would no longer take part in setting rules.

Barnier said the transition would allow Britain and the EU to finalize their eventual relationship.

There was not yet a clear vision of future arrangements around the Irish border. Barnier said. But he added that a "backstop solution" had been agreed that would avoid a hard customs border.

"We have agreed that the backstop solution must form part of the legal text of the withdrawal agreement."

Davis and Barnier had met earlier on Monday. Envoys from member states in Brussels had been summoned to an urgent meeting ahead of those talks.

Just ahead of the announcement, the Irish government said it needed a guarantee from the EU that there would be no hard border on the island of Ireland.

Irish Foreign Minister Simon Coveney said it wanted Brussels to ensure that a fallback protocol agreed in December would be adhered to as part of any deal.

"The EU27 have been consistent that there can be no backsliding on any part of December's agreement," Coveney was quoted as saying ahead of a meeting with fellow EU foreign ministers in Brussels.

"This highlights the importance of the UK engaging meaningfully on all aspects of the Withdrawal Agreement, including the fallback Protocol on Ireland/Northern Ireland."

The pound sterling, which has shown jitters in recent weeks amid warnings from Barnier that a transition might not be agreed, on Monday rose to its highest level against the euro since February.