Brexit Diaries 52: Britain's on the highway to Hell

Were kicking the can down the road an Olympic sport, Theresa May would have a gold medal. Plus, Captain May aims for the iceberg, Leavers are hurt by Donald Tusk's words, and more in this edition of DW's Brexit Diaries. 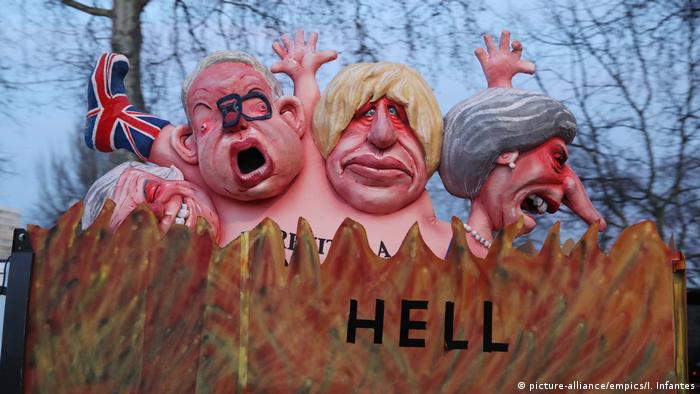 "We now all need to hold our nerve to get the changes this House requires," Prime Minister Theresa May told the House of Commons. She did not say "and by the way we will force the European Union to accept our changes to the Brexit deal," but Parliament knew what she meant. Captain May is attempting to inspire the crew of her Titanic to remain steadfast. The logic seems to be that if everyone on the ship keeps staring at the iceberg, it will decide to move out of the way.

This seems to a most reasonable course of action with the Brexit just over six weeks away. May, apparently well-trained in the Olympic discipline of kicking the can down the road, appears to be fixated on winning the gold medal.

"It's not running down the clock," Andrea Leadsom, the Conservative leader of the House, said, defending her prime minister. In the Tory imagination, even waiting until the last week of March would still give MPs ample time to endorse May's deal.

That's not how they see things in Brussels, alas. "Something has to give," Michel Barnier, the European Union's chief negotiator, said on Monday. But it surely will not be May.

May has gotten creative since dramatically losing a vote on the Brexit agreement in January — extremely creative.

What May has now presented is an imaginary Brexit deal. Would MPs vote for a divorce agreement with the European Union that did not contain any kind of regulation for the Irish border? In other words: Would they say yes if the word "backstop" were replaced by "alternative arrangements"? The best thing about alternative arrangements, of course, is that everybody can make up their own.

Lawmakers sided with May this round, and she pledged to go back to Brussels and bring back a better deal.

European Council President Donald Tusk appears to have poisoned the diplomatic waters after publicly wondering what part of hell would be reserved for Brexiteers who were advocating for the United Kingdom to leave the EU without a plan. In Britain all hell broke loose, and Leavers reacted with outrage to the insult.

That made for a frosty mood when Tusk met with May and European Commission President Jean-Claude Juncker. The heads of EU institutions politely told the prime minister "no." When it comes to Brexit, you have to prepare for the worst. Understandably the Royal Household got nervous reading about expected shortages of food and medicines in case the Brexit comes into effect before a deal is struck. No food would mean riots in the streets of London, and a dangerous situation could develop for the queen. History shows that furious masses tend to storm palaces.

The officials dusted off the Cold War-era evacuation plans for Her Majesty and repurposed them for modern times. Should it all go horribly wrong, the queen must be brought to a safe haven outside of London.

The original plans had involved the royal yacht and a leisurely trip around the Scottish Isles. Sadly the good ship Britannia was decommissioned in 1997. Nor would the royal train be an option, rail service being unreliable at the best of times in Britain. And surely a motorcade barreling north up the M1 is off the table, especially now that Prince Philip has surrendered his driver's license. In the end, only the Royal Air Force might be able to save Elizabeth II from the wrath of her subjects. It will be limited hand luggage presumably, so the queen might have to leave some of her headwear behind.

In the 2016 referendum, 61 percent of residents of the town of Sunderland voted for Brexit.

Now, two and a half years later, the economic reality has hit hard. The Japanese car giant Nissan had always regarded its British plants as the gateway to the EU market. And its factory is by far the biggest employer in the Sunderland region. Now the company has pulled the emergency brake. Breaking earlier promises, Nissan announced that it would not produce its new X-Trail SUV in Sunderland. Management said issues with diesel and the uncertainty surrounding Brexit had contributed to that decision.

That is further embarrassment for May's government. Thousands of industrial jobs are now threatened — and May had already promised about 60 million pounds (€68 million/$77 million) in state aid to shield Nissan from the consequences of Brexit. The details of this deal had been kept secret because nobody had wanted to admit that leaving the EU would have negative effects on the United Kingdom's car industry. The hard-core Leavers are still accusing Nissan of fearmongering. Reality is always getting in the way of their beliefs.