The EU's chief Brexit negotiator says the bloc won't wait much longer for the UK to agree to settle its Brexit bill if trade talks are to take place in January. EU officials say the UK may have to pay up to €60 billion. 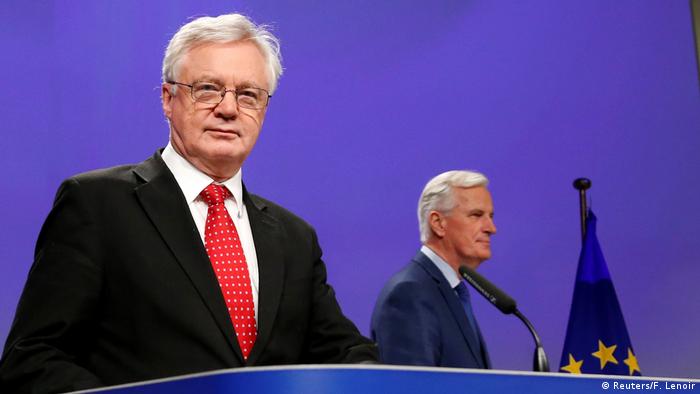 Britain on Friday was reminded once more that time is running out to advance Brexit negotiations as both London and Brussels remain in dispute over the final cost of the divorce.

He said progress in negotiations on how much money Britain will owe the EU when it leaves the bloc in March 2019 was imperative if EU leaders were to allow discussions on future trade ties with Britain in December.

Barnier was speaking at a press conference in Brussels after a sixth round of Brexit negotiations ended without a breakthrough.

Barnier's remarks seem to tighten the screws still further on Britain after The Financial Times earlier cited an unnamed EU diplomat as saying the issue needed to be settled within two to three weeks.

The Brexit bill is estimated by the EU at around €60 billion ($70 billion). But the UK has insisted that it should be more like €25 billion.

Round six of Brexit negotiations, which began on Thursday, continued on Friday to focus on the financial commitments, the status of the border between Northern Ireland and EU member Ireland, and the future of EU/British citizens living abroad, who will be impacted by probable immigration changes.

Brexit Secretary David Davis had insisted on Thursday that progress was being made behind the scenes and that Britain was serious about "safeguarding the rights of EU citizens" living in the UK after it exits the bloc.

In somewhat less upbeat assessment, Barnier conceded on Friday that "some progress" had been made on citizens' rights, but said both sides needed "to move further on a number of points."

Britain meanwhile is eager to begin long-term trade talks with the EU, as it readies plans to leave both the single market and customs union and instead pursue its own trade deal with bloc.

An EU source told the Agence France-Presse (AFP) news agency that Brussels was prepared to commence trade negotiations after Christmas if the divorce bill is settled.

"Everything is ready (to start trade talks) on the first of January," the diplomat told AFP on the condition of anonymity.

Britain also wants to discuss a possible transitional phase of around two years after Brexit Day in March 2019 to ease the impact of its exit.

But that didn't stop the government making clear late on Thursday that the country's exit from the bloc would occur at exactly 2300 GMT on March 29, 2019, and be enshrined in the withdrawal legislation currently being discussed in parliament.

With a full trade deal likely to take five years or more, one suggestion is that after a transition there could be a second semi-transitional period during which Britain joins the European Economic Area, along with Iceland, Liechtenstein and Norway.

"Perhaps park (Britain) in EEA after the transition — that could be one solution. Transition until maybe 2020 and end of the (current EU budget cycle), perhaps prolonged, then maybe you could do it," the diplomat said.

British Prime Minister Theresa May's minority Conservative government remains deeply divided over what kind of deal it is seeking with the EU. Meanwhile several polls have suggested that a sizeable percentage of Britons who voted for Brexit are now less confident that it will be a success.