Dozens of banks are in advanced talks with the European Central Bank about moving operations to the European mainland. As Brexit nears, many London-based financial institutions are considering Frankfurt, Paris or Dublin. 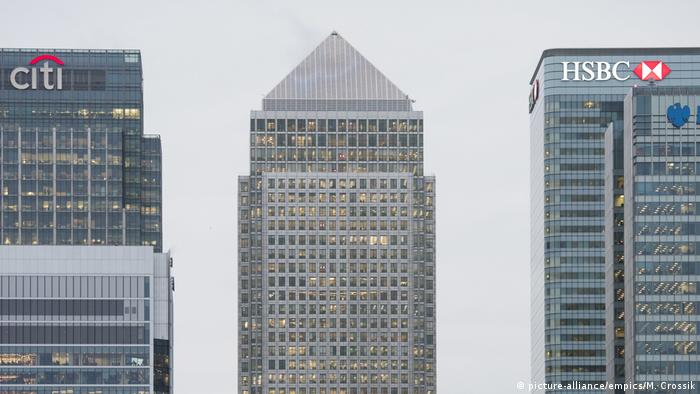 Amid concerns that Britain may exit the European Union in 2019 without a new trade deal, some 50 London-based banks have approached eurozone banking regulators about relocating key services within the revised bloc, the European Central Bank said on Tuesday.

"Some have visited us several times to discuss their plans to move," said Daniele Nouy, who heads the ECB's banking supervision.

Updating eurozone finance ministers — currently meeting in Brussels — on the progress of discussions, Nouy said the banks wanted clarity on how they can retain access to the single market after Brexit. She said 20 financial services providers have already applied for a eurozone banking license.

No to shell branches?

But Nouy voiced her concern that international banks were overly relying on "empty shell" subsidiaries to continue working in the bloc following Brexit. She warned banks against setting up branches in the EU in name only, while keeping most of their operations in London.

Under EU law, financial institutions wanting to offer services such as deposits and lending are required to have an independent subsidiary based in an EU country.

If it fails to negotiate a new relationship with the rest of Europe when it departs the EU in 17 months from now, Britain will lose its passporting rights to provide financial services within the bloc.

Several banks have publicly indicated that they plan to move hundreds or thousands of London-based employees to Frankfurt, Paris and Dublin, among other EU-based locations, in preparation for the UK's departure.

A number of Japanese lenders in particular and US investment bank Morgan Stanley have already confirmed their moves to the German financial capital. Others are waiting until early 2018 to see if a smoother Brexit can be agreed between Britain and the UK, after a multi-year transitional arrangement was mooted after negotiations looked likely to stall.

The potential exodus is not limited to financial services as some London-based law firms have also enquired about moving their headquarters to Dublin.

Management Consultants Oliver Wyman have estimated that as many as 75,000 banking and insurance jobs could leave Britain in case of a so-called hard Brexit, where no new trade deal with Europe is finalized. The firm has estimated that 10,000 positions would be relocated on the first day after Brexit.

It estimated that, in a worse-case scenario, British-based banks would lose 40-50 percent of total revenue from selling financial services to the EU.

London's banking chiefs will travel to Brussels this week to shore up the UK capital's financial services sector post-Brexit. Several banks are planning to move staff to Frankfurt and Dublin to satisfy EU finance rules. (03.07.2017)

After warnings that Brexit would dent one of the few sectors where the UK is a global winner — financial services — it turns out the City is relatively unscathed. But some ask if COVID has just delayed the inevitable.

What next for London, the world's second-largest financial center? 31.12.2020