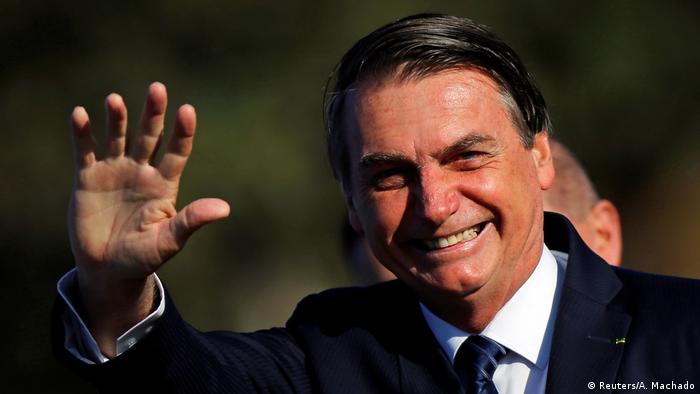 Data released by the INPE in July data shows deforestation accelerating — raising concerns as officials negotiate an EU trade deal. Bolsonaro said his Cabinet should review data before the INPE releases it.

The president came out swinging at regulators Monday. His Agriculture Ministry authorized 51 pesticides and herbicides, bringing the number of agritoxins permitted to 290 in the just over half a year of his government so far.

Read more: Could Brazil's new ambassador to the US be a Bolsonaro?

Seven of the pesticides authorized on Monday contain an ingredient that researchers believe is contributing to the global die-off of bees.

The Agriculture Ministry reports that deregulating agritoxins offers business "more-efficient alternatives of control and with less impact on the environment and human health."

Bolsonaro stripped a council that helps set drug policies of almost all of its nongovernmental members, indicating he hopes to stifle dissent. He said he wished to eliminate all councils, which mix appointees, experts and representatives of civil society created to help formulate policy.

"We want to wipe out the councils, extinguish the vast majority of them so that the government can function," Bolsonaro told reporters, criticizing members appointed by previous governments who might not share the views of his administration. "We cannot be held hostage by councils," Bolsonaro added.

The body, which operates under the Justice and Public Security Ministry, approves or updates national drug policies. The new decree also includes a clause forbidding members to speak openly about the council's discussions and projects without prior approval from government officials.

When his administration celebrated 100 days in power this spring, Bolsonaro signed a decree to shut down dozens of federal councils, committees and forums, saying that would allow significant savings, but did specify how much money. Brazil's Supreme Court quickly weighed in, limiting Bolsonaro's action to committees and councils not created by law but by decrees.

Bolsonaro has managed to downsize councils, trimming the influence of independent members. In May, he slashed a body that oversees environmental policy from 100 to 21.